Jet8 were one of the most exhilarating bands that I had the pleasure of seeing in 2019. They turned up at Level Up Festival at the New Cross Inn last July they blew everyone away with their high octane skacore music. In January this year, the six piece from Prague released their brand new album – Chasing The High. Always being keen to check out new ska releases, it wasn't long before I was all over this. 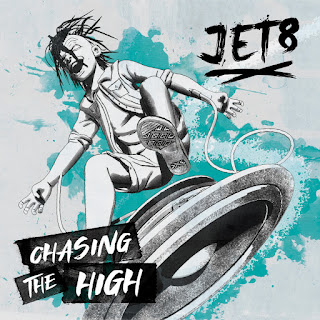 Chasing The High begins with Caught In The Pliers. As you would expect from a skacore band the track, and therefore the album, start in a blistering fashion. After an extended introduction, Martin's vocals come in and you’re yearning to really lose your mind. The track is a social commentary on life in work and how employers try to take away any individuality you might have. Jet8 have a brilliant ability to portray their anger with some brilliant gang vocals spread throughout the track. Sooner Than You Think sees the band really increase the ferocity. This track definitely displays Jet8's hardcore influences. I really enjoyed the intense, hoarse screaming alongside Martin's skate punk vocal, creating an outstanding sound. This intensity really makes you listen to the song’s message which is about putting an end to all the hatred in the world and how eventually all of the good, honest, kind people will overcome this. This is a powerful song. Up next is the album's title track, Chasing The High. After the intensity that opened the first two songs, Chasing The High actually has a slower start. This allows the band to build the song up so that when it really gets going you're ready to get crazy. The song is a love letter to the underground scene and how it gives you an escape from your normal life. It gives you such a good feeling that you need to do it again and again.

The fourth song, Between The Lines starts suddenly and quickly grabs your attention with some hoarse screaming. As the song progresses, it becomes more melodic and almost like a pop punk track at times. Jumping between styles effortless, this really shows what a good band Jet8 are. The track is about how the government and the media feed us lies to scare us into doing what they think is right. This was one of my favourite songs on the album. Not only is it really interesting musically but it's so powerful lyrically. Be The Best At All The Bad begins in a similar fashion with some more primal, hoarse screams welcoming us into the song. After these screams, the song starts up properly with its chorus. Packed with big gang vocals and delivered in a way which is easier for the listener to pick up and sing-along to, you quickly feel a part of the track. This is a song about self-improvement with the message of being able to be better even if you're someone who has done a lot of bad things.

Die Alone begins the second half of Chasing The High. Feeling like one of the more personal songs on the album, on this track Martin sings about a close friend who gets imprisoned for committing a crime and how he feels like they've let him down. As it's more personal, it definitely feels like there is a lot more emotion in the song. This doesn't mean, however, that it's not another mosh inducing hardcore banger that will have you bumping into everyone around you. The seventh song is titled Helping Hand and will feature on an upcoming CPRW Records comp. It's a song that implores you to be less selfish and try to help more people who really need it. If we work together to help the less fortunate, we can really do a lot. I loved the positive message surrounding this song. It's another powerful track that will hopefully inspire folk to do more to help those in need. If you're a fan of the UK ska punk scene then you should recognise the familiar voice that appears on the eighth track, Minute To Midnight. Faintest Idea's Dani Rascal makes a special guest appearance. It's a political track about how the people in charge are more willing to spend money on things that aren't important, rather than things that could save our planet. Martin and Dani ask throughout the song "how will we survive?" Sadly, it's a very legitimate question.

The penultimate song is Down And Out. One of the more brass heavy songs on Chasing The High, particularly in its opening. I appreciated this, particularly as when I got to see them I found myself to be enamoured with their brass section and the energy they brought to the songs. The band change their style up on the track with, at times, an almost hip hop style to the vocal delivery. This keeps Chasing The High sounding fresh and exciting this deep into its duration. The chorus is a big one, with gang vocals and Martin's lead taking turns on each line. It sounds fantastic. The album is finished with the song Golden Cage. This was a perfect choice to finish the album and I wonder if it was written with that idea in mind. It starts slowly, gradually building up before we get to the most ferocious hardcore song on the entire album. It's the good kind of hardcore that gets you worked up and inspires you to go make a difference in the world. Unlike a lot of hardcore tracks, it's not played at 100mph. If you listen to the music, it's very intricate, with all of the band's members playing a part in layering this great backing for Martin's vocals. A fine way to finish the album.

The biggest concern I had when listening to this album, after first listening to Jet8 in a live setting, was would they be able to match the intensity and energy of that performance on record? I'm sure you can work out from reading the review that I had no need for any concern for this. It takes a very good band to be able to take the energy from their live set and get it down on record. Jet8 are a very good band.

Stream and download Chasing The High on Bandcamp here.

This review was written by Colin Clark.
Posted by ColinsPRW at 12:23:00