I’m a relative newcomer to the ‘scene’ – I’ve only been hanging around NXI begging Paul for gigs for a couple of years, which is nothing compared to what I’ll refer to, with love and respect, as the Punk Elders. So I hadn’t even heard of MPF until shortly before last year’s iteration, when suddenly my entire Facebook timeline consisted of 1) grainy shots of bands I love, and 2) breakfast pints (and my cousin’s kid dressed as the Easter bunny – unrelated).

Fuck, I thought, that looks awesome. Why am I not there?

Well, I dislike regrets so as soon as this year’s tickets were released I snaffled one up (thank you, super early bird prices) and set about trying to persuade my girlfriend to join me. Unsuccessfully, as it happens. But no matter – a couple of years ago, I would never have gone to a 3 day festival outside my home city on my own, but after my steady (welcome) indoctrination into the punk scene I’ve realised that you’re never on your own. Unless you want to be. Which I probably will around 11am on the 27th April.

Anyway, long-time CPRW readers will know that THEY LOVE A LIST. So here, in no particular order, is a selection of the things I’m most excited about for MPF2020:

- Buying a pair of MPF branded sunglasses then wearing them on my head whilst sat outside a bar drinking pints with people I didn’t know until 24 hours previously and talking about how we wish Shit Present would play more shows. Too specific?

- Seeing Fresh for the first time (I know it’s ridiculous I haven’t seen them yet, don’t @ me).

- Completely, totally and utterly losing my voice for at least a week afterwards.

- Finally getting to see The JB Conspiracy after missing the Friday of Do It Together Fest for reasons my bassist definitely doesn’t want me to make public.

- Hanging with Chloe and Sam after inevitably becoming the very best of friends while on tour at the end of March (PLUG PLUG PLUG).

- Catching Popes of Chillitown again – I first saw them by accident when I was drunk in Camden with a friend maybe 7 years ago, and we decided to go to the first gig we came across. It was at the Barfly – Millie Manders opening, then Popes, then Riskee & The Ridicule. There were maybe 12 people there and it was BANGING.

- Being myself, wearing what I want to wear and going crazy down the front without fear of being judged. Sounds simple but ‘real life’ all too often involves having to pretend or amplify parts of myself and it just gets… tiring. So 3 days of not worrying about anything beyond schedule clashes cannot come quickly enough.

I’m going to have to stop myself here as there are at least 63 other things I could write about (including seeing hometown faves Triple Sundae and chilling out with some acoustic goodness from Chloe Glover), so let’s take a look at the things I’m worried about:

See you there. I’ll be the one in the sunglasses banging on about Shit Present.

In March, Katie is doing an acoustic tour with Chloe Hawes and Sam Maloney of Mixtape Saints. Check out the dates below and pop along to a show – it's going to be great. 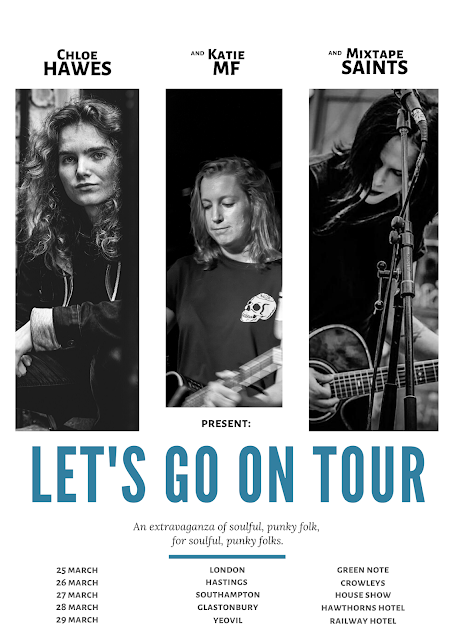 This column was written by Katie MF.
Posted by ColinsPRW at 13:26:00