Today CPRW Records released their latest compilation album, Hidden Gems. We love discovering brand new bands that you haven't heard of yet and telling anyone and everyone about them. That's the whole theme of the compilation. We've put together twenty-seven of our favourite bands, all of whom have around 200 "likes" on Facebook in the hope that people will check them out and give them some support. There's a plethora of fantastic bands all around the world that are so good and deserve your attention. Here at CPRW we are well aware sometimes people need a little bit of convincing to try something new, so we've written a nice introduction for each of the bands on Hidden Gems. 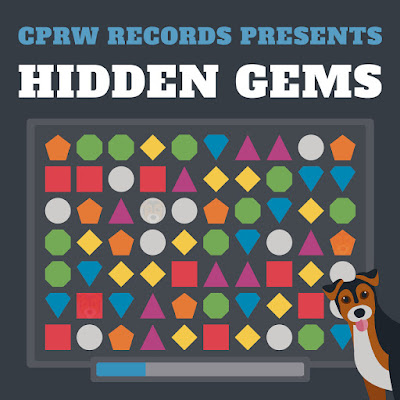 The Jawnstowne Standard
Allentown, Pennsylvania's The Jawnstowne Standard were one of my favourite discoveries of 2019 and their EP Punxsatawney found its way into my top ten of the year. They play raspy voiced pop punk music with loads of great hooks and fists in the air moments. FFO Hot Water Music, Off With Their Heads, Burnt Tapes.

Free Dogs
Based between Leeds and the Netherlands, Free Dogs are one of the most exciting bands I've discovered in recent times. In October they released their debut album, Academy Training Wasted. It features a great mixture of upbeat and slower paced, electronic and acoustic tracks that all do a fantastic job of captivating the listener. FFO Against Me!, Crazy Arm, Onsind.

The Muttnicks
We had the pleasure of first discovering Hamburg's The Muttnicks playing a stunning set on a boat at Booze Cruise Festival last year. We'd never heard of the four piece before but were quickly blown away by how good they were. One of the best surprises of 2019 for sure. The band plays social and politically aware skate punk that will make you think as well as shout along to it. FFO The Bouncing Souls, Strike Anywhere, Pistol Grip.

The Sheldons
There was no way I could release a compilation without some ska punk on it. This French band take more of a traditional ska style, up the tempo and add a whole bunch of punk attitude to their music. In true ska style, this song will have you skanking around full of joy. FFO The Suicide Machines, Common Rider, Operation Ivy.

Foreign Bier
You might recognise the name Foreign Bier from our recent review of their album – I Don't Believe Anything, Anymore. The Norwich based three-piece play melodic orgcore punk rock and deal with topics such as growing up and mental health. Staples of the genre. FFO The Lawrence Arms, Fletcher, Foo Fighters.

Bear Away
Scarborough's Bear Away have been on the CPRW radar for a little while now. The team’s Northern most member Richard messaged Colin a little while after they sent a track for Hidden Gems, suggesting we feature them. Colin was on the ball and Richard has immaculate taste. Bear Away have a great knack of writing a melody that gets stuck in your head immediately. FFO Iron Chic, Latterman, Triple Sundae.

Bashful
Bashful are a new pop punk band from Richmond, Virginia. My buddy Max from Captain Asshole suggested that I check them out and I instantly fell in love. It’s fast paced, lots of energy, great harmonies – everything I want in my pop punk music. Definitely a band to look out for in 2020. Their album Driving is packed full of bangers. FFO The Ergs, The Copyrights, Dear Landlord.

Jumping The Fucking Shark
I know Jumping The Fucking Shark as the band from New Zealand with all the unnecessarily long song titles. The three-piece are a garage rock/power pop band who have this great ability to make the complicated sound oh so simple. This band have harmonies for days. FFO I don't even know but it's really good.

Dog Eared
Dog Eared seem set to be the new shining light in the Scottish pop punk scene. We had the pleasure of seeing this trio play at Book Yer Ane Fest at the end of 2019 and were super impressed with the band. So much so that I messaged a promoter friend of mine and told him that Dog Eared are a band that he needs to keep an eye on. FFO Aerial Salad, The Kimberley Steaks, Fastfade.

Love Hearts
Ramonescore pop punk always has a special place in my heart so I was over the moon when Love Hearts agreed to appear on Hidden Gems. It's a really under-appreciated genre in the UK and fills me with the most amount of joy. Love Hearts feature Mikel of The Lemonaids and CPRW favourites The Hallingtons writing super sweet love songs played along to three chords and a driving drumbeat. FFO The Ramones, The Apers, Masked Intruder.

Boardinghouse Reach
I have no idea how more people don't know Boardinghouse Reach. The four-piece from Chicago formed in 2017 and play the mid-tempo melodic punk with the raspy vocals style that the kids who go to The Fest in Gainesville absolutely adore. FFO Arms Aloft, Nothington, Timeshares.

High Praise
I can't wait for the UK pop punk scene to get wind of High Praise. Lead by Charlie Piper of scene heroes Gnarwolves, High Praise play 90s influenced emo/pop punk. When I first heard High Praise I had no idea of the band’s musical past. I enjoyed how well thought out and structured the songs are and how they were different to what a lot of bands are doing these days. FFO The Flatliners, Drug Church, Gnarwolves.

Nothing Specials
Japanese third-wave ska punks Nothing Specials are sure to get you dancing. Since the 90s, the Japanese ska punk scene has been providing some of the most energetic and exciting bands and the Nothing Specials certainly follow in that tradition. FFO Kemuri, Potshot, Mad Caddies.

Missing The Scene
Reading's Missing The Scene are a four piece alternative pop punk band brought to my attention by Dan#2. When I first listened to them I was blown away by lead singer Rachael's brilliant vocals. The band recently released their stunning debut EP Dinner By Gaslight which is raising money for Berkshire Women's Aid. Not only are they a great band, they're great people. FFO Tsunami Bomb, Airstream Futures, Press Club.

Kick Back
Munich skate punks Kick Back feature Theo from Captain Asshole on bass guitar. When I first heard their debut EP, Glad For A Moment, I was instantly struck by how good they were. Mixing up fast and poppy punk with a harder and more melodic style, Kick Back are a band that aren't afraid to throw all their influences into the pot and see what comes out. FFO Lagwagon, Blink-182, No Fun At All.

Prize Dink Camp
When Folkert of Koala Commission, Chrandesyx and El Topo All Star Band told me he was starting a new band which would be a keyboard led skacore band I was very keen to hear them. That band are Prize Dink Camp and they're one of the most original ska bands I've heard in a long time. Anyone who has ever heard Folkert sing will tell you he has one of the best voices around and it's in top form here. FFO hearing something completely new.

The Draughtsmen
My love of the Canadian punk scene is no secret so I was certain to get at least one band from there on Hidden Gems. The Draughtsmen are a three-piece from Ottawa who play introspective punk rock with raspy vocals. The Draughtsmen are fantastic at painting a picture with their music as well as telling stories. FFO The Gaslight Anthem, The Replacements, The Penske File.

GhostRun
London's GhostRun offer something a bit different to the traditional punk rock sound. Adding elements of electronica to a pop punk sound, GhostRun show how you can take two different genres, mash them together and create something quite striking. FFO Jeff Rosenstock, Paramore.

Talk Wrong
Talk Wrong are a fast pop punk band from Syracuse, New York. This is that breathless and chaotic style that I've really come to enjoy over the past year or so and I discovered Talk Wrong at just the right time. In January of 2019, Talk Wrong released an absolutely superb debut EP named Feral Bearings – definitely one to check out. FFO Face To Face, The Mr T Experience, The Copyrights.

The Sidekick
French punk rockers The Sidekick offer a heavier and more aggressive punk rock style. Taking elements of rock 'n' roll and hardcore, The Sidekick pack loads of fury into their music and it just gets you ready to go and get crazy. FFO The Misfits.

The Electrojets
Canada's Electrojets play throwback Ramonescore pop punk. Currently on Out Loud Records, if they had been around in the 90s they would have found a perfect home on Lookout Records. It's fast, it's simple and it's fun. Everything a band of this genre should be. FFO Screeching Weasel, The Eyeliners, Boris The Sprinkler.

Why Pinto
Why Pinto are a DIY pop punk band from the South of England. They are a three piece with a big love of the early 2000s pop punk scene, offering a fresh take on a played out genre and making it sound exciting again. Why Pinto offer an escape to a simpler time in our lives and I love them for that. FFO Blink-182, New Found Glory, Allister.

New|Old
New|Old are an orgcore band from Prague, Czech Republic. The first time I heard them (via Bandcamp Discovery) I knew this was a band I needed to get more people to hear. Combining noodly, jangly guitar riffs with powerful rhythms and vocals that would give Chuck Ragan a run for his money, New|Old have the potential to be a big name in the European punk scene. FFO Hot Water Music, As Friends Rust, Boysetsfire.

The Gubs
The Gubs are a brash and snotty, three chord punk rock band from Portland, USA. The trio released their debut album (self-titled) in November of 2019 and show a hell of a lot of promise. Much like The Electrojets, The Gubs would be right at home on Lookout Records. FFO Screeching Weasel, The Queers, Riverdales.

El Sancho
Hawaii isn't usually a place that springs to mind when you think of punk rock but they actually have a fantastic little scene. El Sancho are one of the great bands on the island. El Sancho are a bit of a throwback band, channelling the early days of punk from the 70s and 80s but bringing it to the 21st century. FFO The Clash, Buzzcocks, The Damned.

Melodic Disaster
Sunderland three-piece Melodic Disaster play melodic punk rock with hints of pop sprinkled throughout. What I really enjoyed when I first heard Melodic Disaster was the urgency that was spread throughout their songs. They have a great way of making you really care about what they're singing. FFO Direct Hit, The Dopamines, Chinese Telephones.

The Hope Hereafter
I remember the exact moment I first heard The Hope Hereafter. I was sitting down at CPRW HQ (aka. my living room) on a Tuesday evening and Emma was at the gym. I clicked on this album on Bandcamp, listened to Twenty Seven Forever and immediately text Emma to tell her that I've discovered the best new band in the world. Perhaps I was exaggerating a little bit – I do that when I get excited – but The Hope Hereafter are really bloody good. FFO Early Against Me!, Prince Daddy & The Hyena, Hot Mulligan.

You can buy Hidden Gems from CPRW Records here. All money made from Hidden Gems is going to be the cancer support charity Macmillan. Macmillan offer physical, mental and financial support to cancer sufferers, whatever stage they are at.

This column was written by Colin Clark.
Posted by ColinsPRW at 12:35:00