Dead Wells are a four piece band from Chicago playing contagious gruff pop punk music. In January, they released their second EP simply titled II. Knowing very little about the band, I discovered them via Bandcamp, I hit play and new this was soon my new favourite band. 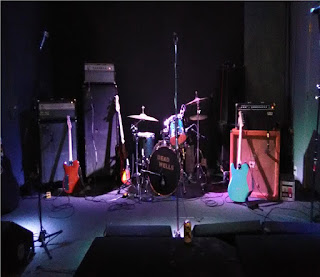 Something that really made Dead Wells stand out to me on my first listen was the combination of clean and gruff vocals. This is displayed perfectly on the opening song, Whiskey Dick. It starts out with the clean vocals welcoming you into the song with a fantastic sing-along opening. As soon as the tempo comes up a dirtier, gruffer vocal appears for the verse before the pair combine on the chorus. I love any band that uses two different vocalists – I always find it adds such energy to the song. This is a fantastic way to begin the EP, as well as giving new listeners to Dead Wells an idea of what to expect. Up next is Small Victories. Starting slowly before bursting into life with those dual vocals, the track falls into a more poppy style. The guitars chug along at a great pace, giving the song an urgency that is infectious. The chorus is instantly catchy and if Dead Wells don't have you singing along to that then you will surely be providing backing whoa-ohs.

Down And In starts out reminding me of bands such as Teenage Bottlerocket and The Lillingtons. It goes along at a nice pace. It's uptempo but it's not so fast that it leaves you struggling to keep up with the vocals. Combining tempo, melody and hooks – this is how you do pop punk music. The penultimate song is The Places You Have Come To Drink The Most. This is perhaps my favourite track on the EP, which is saying something as I really enjoyed the entire release. The gruffer vocals are more prevalent on the track, giving it an aggression that the other songs lack. It's a bit harder to sing along because, at times, it is tricky to understand all the lyrics but there's so much passion coming out of the song that you just get swept away with it. The track is about realising you're drinking too much and trying to deal with this realisation. The EP finishes with VFW. This is another song about drinking. In this case, it's about drinking to deal with life's problems and shutting them away. The gruff and clean vocals are at their best on the song, whether they're trading lines or together they are just magic. If you want a song to fill you with energy then look no further than this song.

I was very new to Dead Wells before listening to this EP. Now I'm a very big fan of the band. They are everything I want in a pop punk band and I'm now itching for more… and to see them live, I'd very much like that.

Like Dead Wells on Facebook here.
This review was written by Colin Clark.
Posted by ColinsPRW at 16:24:00