Album Review: I Don't Believe In Anything, Anymore! by Foreign Bier

Foreign Bier are a band I discovered when CPRW was down at the end of November. I was super impressed with the Norwich based three piece’s gruff melodic punk rock style. In January, the band released a brand new eight track album titled I Don't Believe In Anything, Anymore! Given how much I liked what I heard previously, I was very keen to check this album out. 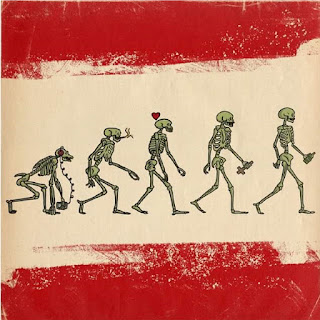 The album begins with the track Invisible. The song is about that feeling most punks have when they're younger, feeling like nobody notices them and eventually snapping, deciding that they don't care about what people think about them anymore. This is an anthem for anyone who has ever felt like they don't fit in. By saying it's an anthem, you know that the track has a massive chorus that stays with you for a while. There's a familiar guitar riff that opens the next song Who Cares About Metaphors!?. It reminds me of the opening of the Foo Fighters classic Learn To Fly. I wonder if this is on purpose given the title of Who Cares About Metaphors!? and that Learn To Fly is a metaphorical song about being the best you can be.

The third song is titled Do You Ever Talk Back To Yourself?. It's a short and up-tempo song that blasts through in no time at all. The tempo of the song is infectious and you find yourself being swept along with the song as the band tackle the subject of mental health. In particular, the voices in your head that make you question yourself and make you feel anxious. It was nice touch at the end of the track to slow things down. I wonder if it's a bit of symbolism, with the mind slowing down so does the song. Up next is The Proverbial, Can't Get You Out Of Your Head. This song has a real feel of Chicago punk legends The Lawrence Arms to it and I love it. There's a nice urgency in the song, seeming like they want to get through the track as quickly as possible. It's another song that deals with mental health issues. This time it's a darker theme, with the band telling a story about thinking about being dead and asking if you would be there for them.

The penultimate song is named Bitter And Tired. There's a poppy side to this song that Foreign Bier haven't displayed yet on the release. I found that this gave the album a freshness that kept things interesting and showed variety in the band’s songwriting. The track is about feeling apathetic with things in your life and not really wanting to change that. It's one of those songs where the upbeat music contrasts with the general downbeat nature of the lyrics. The final song is kind of two songs in one. It's titled The Good, The Bad And The Dead! & It's Just A Wet Dream You Dope! The Good, The Bad And The Dead continues down the melodic gruff punk style and is about how no matter who you are and what you've been through in your life you will finish it the same way as everyone. I think it's a metaphor for the idea that no matter how different people might seem from each other ultimately we're all heading in the same direction. The second half of the song, It's Just A Wet Dream You Dope!, is a short acoustic song about dreaming of dying and being excited by that. It's not the cheeriest of ways to finish the album but it will certainly stay with you.

I'm not sure that Foreign Bier are the most well known of bands in the UK punk rock scene but if they continue to release music with as much quality as this they soon will be. This is one of those great examples of taking a chance on a band you haven't heard of and discovering some great music. I'd advise you to also take that chance.

Stream and download I Don't Believe In Anything, Anymore! on Bandcamp here.