Wiretap Records are one of those labels that constantly release gold. The latest example of that gold comes in the form of Watch It Burn by American Television. American Television are a four piece band from Washington DC. Since forming in 2013, they've consistently released EPs and singles but Watch It Burn is their first full length. It contains ten songs of infectious pop punk that will quickly embed themselves into your mind. 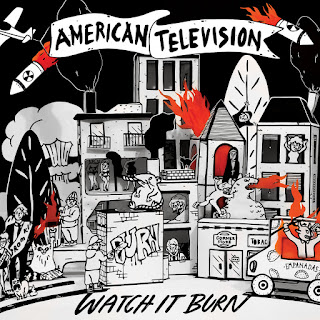 Watch It Burn begins with the song Awkward Universe. Like all good openers, there's a great build before the song starts properly with a gang vocal shout of the line "for what it's worth" before the lead singer of the song takes control. Musically it has me thinking of cross between The Copyrights and The Loved Ones – fast paced yet melodic with fantastic vocals and catchy lyrics. The track is about making your way through life without ever knowing what's next and how we should all try to and get on with one another as we're all on the same pathway. American Television increase the tempo on the second song, Standing Still. On my first listen, the opening drumbeat really caught my attention before the vocals come in and inject a whole lot of energy into the track. They have plenty of urgency behind them but are also delivered in a way that makes them extremely easy to pick up and sing along to. The track is about trying to move forward in your life and not stagnating. The third song is named Dead And Gone. It's a song about moving on from the people who used to bully you when you were younger and realising that you've outgrown them and they're a thing of the past. It's an uplifting song and that's shown in the melody. There's a feeling of joy that comes from singing along to the song, particularly the chorus.

Drinks begins with a deep bass line and some vocals. This gives the song quite an ominous start and an overall heavier tone throughout. Pop punk can be a tough genre to add any kind of variety to but American Television do a fantastic job of it here. The song is about using alcohol to help you get through difficult times and how, at the time, it makes you feel better but it's just a coping mechanism. The fifth song, Parasite, sees the band jump straight back to the fast paced Copyrights style. Injecting some energy at the halfway mark of the album helps ensure that the listener remains with the band. It's an angrier song about becoming something you hate and trying to come to terms with that. In this case, it's becoming "the man" and feeling like you've sold out from your working class roots. This is a stand out song on Watch It Burn, in my opinion. The band seem at their best when they're fast and angry.

Dad's Song is about following the advice of your father and going your own way in life instead of doing what is considered the normal direction and not having anything to show for it. The band drop the pace slightly to allow you to really listen and get a feel for what they're saying in the song. It's a song that seems to have an equal amount of regret and positivity in it. The regret being with the father for not living his own life and the positivity comes from the encouragement for you to do your own thing. Technology is a song about social media and how we become too caught up in it. This seems to be a bit of an in-vogue topic for bands to sing about and I'm all for it. Ironic really, as this blog relies on shares and clicks from social media sites. American Television do a fantastic job of articulately explaining the issues with social media and should really make even the biggest fan of these sites think twice about how they use them.

Wasteland USA is another stand out track on Watch It Burn. It's about the end of the world, so it's super chipper. Musically it's very upbeat, with some great buzzsaw-like guitars and a fantastic melody. On the track, American Television have a defiant attitude where they've given up and are ready to just "watch it burn." The line that really stood out towards the end of the track was "so what's the fuss? let's just get fucked." The penultimate track is titled Misprint. It's about growing up as a misfit punk and finding a home due to the music that you love. There's some great nods to some of the greats they grew up listening to littered throughout the song. "It's a sound salvation, radio" – Operation Ivy/Rancid. "I found a new religion, Greg Graffin was my priest" – Bad Religion. "I've still got a place to call my own suburban home" – Descendents. "I still write my songs with my trusty chords" – Hot Water Music. I always enjoy when bands put little nods to older acts in songs like this. It makes me feel like I'm in on it. That's basically what every misfit kid wants to feel like, like they're a part of something. The final track is named Great Divide. It's about the big difference in social classes in America and the band's frustration with that. This is a powerful way to finish the album and the band again do a great job of articulating why they're so fed up with this "great divide." I really like how well thought out the song is. I've heard plenty of punk songs that touch this topic that are just really angry (and rightly so) but American Television's argument is more likely to hit home with anyone who doesn't have a problem with these issues. American Television have saved their best for last here.

Watch It Burn is a well thought out pop punk album. On the surface it's a lot of fun and has plenty of moments that you can sing and dance along to but it's also got a lot of depth that will keep you coming back again and again.

Stream and download Watch It Burn on Bandcamp here.

Like American Television on Facebook here.
This review was written by Colin Clark.
Posted by ColinsPRW at 16:05:00