In February, French punk rockers Maladroit released their first new music in five years! The Parisian band have been a fixture in the European pop punk scene for years and I became a fan of theirs when I saw them play with Frenzal Rhomb, Direct Hit and Mike TV at The Underworld in Camden in 2014 (I think). What a line-up that was! Their newest release is an EP named Steven Island and it features four brand new songs based around four of Steven Spielberg’s most famous films – Jurassic Park, ET, Jaws and Indiana Jones. After being away for so long, this was the most fun way to come back. 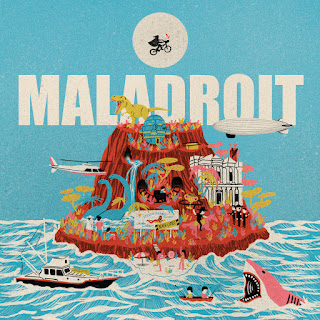 Steven Island begins with Darwin's Got Our Back which is based around Jaws. This wasn't the fast paced and melodic pop punk song I expected to start the EP. Instead it's a stabby, stop-start type of song which has a bit of a darker tone than I usually expect to hear from Maladroit. That's not saying I didn't enjoy the song though. In fact, I thought it was a striking way to start Steven Island and it really made me take notice. Despite the structure of the song, it's still packed with memorable lines and hooks that will stick in your mind and have you singing along in no time. Up next is Raptor Lover (based around Jurassic Park). This song is far more what I was expecting from the EP. Fast, simple, catchy and lots of fun. The line "they say I'm a bad seed" is repeated a lot throughout the song so you'll have no excuse to not be singing along when you see them live. The song is from the point of view of the scientists who created the dinosaurs in Jurassic Park and how they say they're not bad people, they just wanted to see if it could be done.

The third song on Steven Island is titled Exploration Team (Indiana Jones). This is the most conventional pop punk tune on the EP. Think of bands like Teenage Bottlerocket and The Copyrights and you get the idea. Bringing the tempo up even higher than before adds an urgency to the track that I really loved. Lately I'm really enjoying all my music to have some urgency about it. That's not to say that melody is sacrificed on the song. On the song, Maladroit seem to have found the perfect blend of both urgency and melody. I dig it. Last up is Communication Fuck Up, based around ET. Communication Fuck Up mixes the stabby sound of Darwin's Got Our Back and the urgency of Exploration Team so you get the best of both sides of Maladroit's sound. Lyrically it follows a pretty simple structure. I love a simple song though, it connects with me quicker and keeps me entertained. I enjoyed the use of multiple vocalists on the track. Each vocalist bringing a different style helped add a truck load of energy to the track that gets you pumped up and leaves you wanting much more.

Maladroit have returned with a really fun EP which features four fantastic songs. I'm always impressed with how pop punk bands manage to create a variety of sounds. It's such a unique theme to base an EP around and the band have pulled it off superbly. Bravo Maladroit.
Stream and download Steven Island on Bandcamp here.