Every now and again a band that I'm aware of, but not familiar with, release a record that really grabs me. I don't mean a band that I discover and think 'wow… this band have been around for ages, they've released loads of records and they're brilliant… how come I'm only just hearing them now!?' I'm talking about bands that I've seen others talk about, write about and wear the t-shirt of but, for whatever reason, I've never checked them out.

The release of Wolf-Face's Still Golden marks one of those moments. Being Floridian, Fest stalwarts and a band that so many Festers seemingly always want to see, I've always kinda *known* about them; but it's taken this release to *discover* them. So, whilst I don't really know why I got this album, for whatever reason I ordered a copy and setback to determine if there was anything behind the (supposedly) gimmicky masks. It turns out that no, I don't know why this is, and yes, I didn't know what I've been missing. 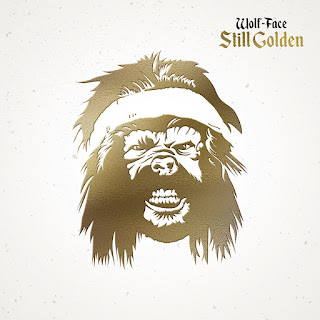 At first, I'm nervous. A glance through the song titles reveals a lot have a 'wolf-style' theme. I wonder if I've missed the joke and the record is going to be 11 cringey songs performed by actual teen(wolf)agers. I'm old enough to remember Snuff playing punk versions of TV adverts which was hilarious at the time, but wouldn't and shouldn't have been for actual grown-ups! But, I needn't have worried. The nervousness is unfounded. It's eleven searing, fist-in-the-air, singalong, punk bangers. I love it.

The album's title track, Still Golden, is the first track and begins as if it's a delicate ballad, leading me to think it's the 'obligatory cutesy intro' (™Deforesters). But it's not quite. It builds quickly with heated guitars and gutsy vocals. It's a great start.

Next is With Or Without Boof. It's fast and Ramonesy (but not Ramonescore, if that makes sense?) and serves to set up Howl Alone and Dog Whistle. These are two of my favourites – fast, catchy, melodic, raucous, singalongs. Feel-good, ready-made crowd favourites. So good.

All Dogs Go to Hell will also be another nailed on, hooky, crowd favourite. Slightly slower, but when played live, there is no conceivable way it won't have the entire crowd belting out in unison the line 'there's no place in heaven for a wolf like me'. It's exactly the sort of song I want as an earworm.

Werewolf And Whiskey Blood is a bit different – an intro using a sample of bar noise and then a harmonica. The bar noise continues and the song has a simple, strong vocal with occasional guitar backing, before the full band come crashing in to finish the song. I love it.

I don't realise it, but The Wolf is actually a cover of a Mumford And Sons song. Why would I? I've never knowingly listened to Mumford And Sons (is that a good or a bad thing?). But this is a lot of fun. The werewolf howling as the song builds especially puts a smile on my face.

No Need To Thank Me is another banger, before the record concludes with Keep Your Chin Up Little Pup – a slower, lyrical song, with the bass and drums not kicking in until the song and album draws to an end. It finishes the record perfectly.

Having now had this album on constant rotation for a few days, I again wonder why it's taken so long for me to *get* Wolf Face. It's an absolute blast, but not in an ironic, goofy, gimmicky way.

It wasn't the pseudonyms that previously put me off – Michael J, The Good Wolf, Rain-Wolf and Wolf-Fart – as I wasn't that accustomed to the band. Perhaps, subconsciously, it was the Teen Wolf outfits, although that sort of thing was never a problem with, let's say, Masked Intruder. Or perhaps I should just put it down to there being so many good bands out there and only having so many hours in the day to listen to them all.

Whatever it was, one thing I've learnt… never judge a band by their werewolf masks.

This review was written by Chris Bishton.
Posted by ColinsPRW at 12:31:00