Making A Case For: Against Me! (by Colin Clark and Emma Prew)

Here's part two of our new series – Making A Case For. In this series, two of the CPRW team take a classic punk rock band and put forward their argument as to why their choice of album is the band’s best. Today, Colin and Emma nominate the best Against Me! album. 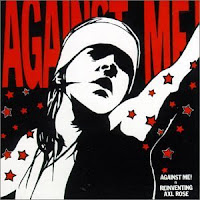 I think that Against Me! are one of the hardest bands to pick a best album by and then convince somebody else why. I think there's a very good chance that the person you're talking to has a strong opinion on a different album. It's also difficult, as Against Me! fans, perhaps more so than fans of any other band, could easily be divided into different eras such is the journey that the band have been on in the past twenty plus years. Starting out as a acoustic folk act playing in cafés, signing to No Idea Records and then Fat Wreck Chords and becoming a full band act, signing to a major label and getting some mainstream exposure and then the current Against Me!. I personally fall into the No Idea/Fat Wreck era of Against Me! fandom and that's my favourite era of the Gainesville band.

This neatly brings me round to my favourite AM! album, Reinventing Axl Rose. Released in 2002 by No Idea Records, this was their debut full length and it takes five acoustic songs from the band’s first EPs and gives them the full band treatment and also includes six brand new songs. I know that, at the time, the band’s early hardcore following gave them some grief about firstly signing to a label and then secondly for becoming a full electric band. I guess there was a feeling that they might lose the raw magic that the band’s early recordings and live shows encapsulated. When the album was released, of course the production values were higher than on those early releases but the band managed to retain that raw style. The rawness of this record is a big reason of why I think it's the best. If you were to argue that the songs on Axl Rose aren't as strong as they are on Cowboy or Transgender I might agree with you but they don't feature the incredible energy that comes from this album. It's always difficult to capture the feeling you get from a live performance on record but, with the help of producer Rob McGregor, Against Me! managed it.

For me, the overall theme of Axl Rose is about raging against the man and the overall sound of the album makes you want to do it together. Each song has this sing-along quality and is littered with quality lyrics that inspire and make you want to throw your fists in the air. The choruses in particular have some awe inspiring gang vocals that bring people together in a big sing-along. A big part of punk rock throughout history is its ability to bring people who feel oppressed together and these songs have been doing that for almost twenty years. These are still the songs that I get most excited for when is see AM! live. These are the songs that I scream my throat hoarse to every single time. They give me this fantastic feeling that's hard to explain but it's pretty bloody special. That's why Reinventing Axl Rose is the best Against Me! album.

Making A Case For As The Eternal Cowboy (Emma Prew) 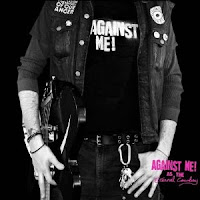 It is often the case with a band that the first album you hear by them – the one that hooks you in and makes you a fan – remains your favourite of their albums. It’s not always like that with me but that’s how I feel about Against Me!. However, let me start by saying that I don’t dislike anything that Against Me! have put out over their illustrious 23 year career as a band. I have favourite songs on all of their albums in their back catalogue. But it is their second album, As The Eternal Cowboy, that has stuck with me and remains my favourite to this day. I suppose this feature, Making A Case For, is supposed to be more about the album being ‘the best’ and not just my personal favourite but that’s okay because Cowboy covers both bases.

For me, As The Eternal Cowboy is the perfect bridge between the pure rawness of their debut album, Reinventing Axl Rose, and the slightly more polished sound of Searching For A Former Clarity, the band’s third album. (The latter being probably my second favourite Against Me! album but it still doesn’t come close to Cowboy.) Against Me! also retain a distinct element of their ‘folk punk’ sound on Cowboy which is what attracted me to the band in the first place – finding punk rock through the more country and/or folk-sounding punk bands first of all.

Folk punk aside, As The Eternal Cowboy is a blisteringly fast-paced punk rock album with 11 tracks, including an excellent instrumental interlude (A Brief Yet Triumphant Intermission), in just 25 minutes. It’s their shortest album but that’s okay because you can just stick it on repeat. From the memorable opening lines ‘The party’s over…’ of the first track on the album, T.S.R. (This Shit Rules), to the stripped back and yet oh so catchy break-up song, Cavalier Eternal, that closes the album. Of course, Cowboy also features plenty of fan favourites that the band still regularly play live such as Cliché Guevara, Mutiny On The Electronic Bay and Rice And Bread. Plus, who could forget Sink, Florida, Sink?! If you’ve seen Against Me! live (and if you haven’t, why the hell not?) then you’ll know that the whoa-oh-ohs are pretty much the loudest part of crowd participation at one of their gigs. Fans can often be heard singing it as they leave the venue.

As The Eternal Cowboy has been described by Laura Jane Grace as being a concept album of sorts, ‘that explores love and war’ with the eternal cowboy character being prevalent throughout the album – someone ‘forever wandering, lost and alone’. Whether you take that away from listening to the album is irrelevant however because, either way, this is an incredible album by an incredible band.

Whilst contemplating and writing this piece, I decided that Against Me! are basically the best punk band of all time and I stand by that statement – As The Eternal Cowboy proves it.

This feature was written by Colin Clark and Emma Prew.
Posted by Emma Prew at 13:17:00

Email ThisBlogThis!Share to TwitterShare to FacebookShare to Pinterest
Labels: Against Me!, Fat Wreck Chords, Making A Case For, No Idea Records