Album Review: About About by Lifewentpear

Recently, whilst searching through bands that have the "gruff punk" tag on Bandcamp, I discovered Lifewentpear. The German four piece previously released a demo at the end of 2016 before unleashing their debut album About About on the world towards the end of 2019. That seems like a long time to wait but I'm sure for anyone who did wait the three years it was definitely worth it. 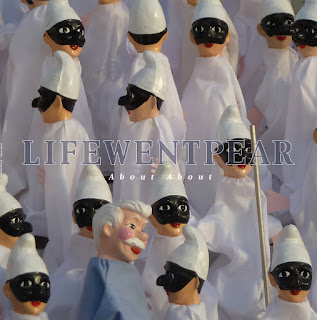 About About opens with Plastic Mexico. The song is a great introduction to exactly what to expect from Lifewentpear – gruff vocals, jangly and intricate guitars, a driving drum beat and some big choruses. The track is about struggling with the humdrum of reaching your thirties and feeling a bit lost. I think this was a great choice to open the album as it felt really accessible immediately as well as making me want more. Bottle Gang is about holding things in when it's best to let them all out. Something that I really enjoyed on the song was the use of gang vocals on the chorus. They're used in a way that really adds emphasis and emotion to the words and really makes you listen to what they're singing. The third song is the album's title track, About About. I always feel like there's extra pressure on an title track to be a stand out. I can report that on this occasion it absolutely is. Musically the guitar riffs are pretty stabby as the vocals really carry the melody. This, again, really lets the listener focus on the lyrics of the song. It's about using alcohol as a coping mechanism but knowing it's not the right thing to do. Before I said the guitars are "pretty stabby", but there is one moment in the track where the song is broken up with a beautiful guitar solo.

Cannery On Fire has quite an urgent feeling beginning that really caught my attention. On this song, Lifewentpear really show-off their skill as musicians with some fantastic melodic fills sprinkled throughout the track. Of all the songs on About About, this is the one that really had me thinking of gruff punk legends Hot Water Music the most. Cannery On Fire could easily find its way onto any of their classic albums. The fifth song, Treat Objects Like Women, is a favourite of mine. I have to admit that when I first read the title of the song I was a bit concerned where it was going but I was pleased to discover that the title is supposed to get you thinking. The track is, of course, about treating women with the respect they deserve and the frustration the band’s singer has with people not doing so and not understanding why that is. The chorus is perhaps the one that stands out the most on the whole album and I hope to be able to sing-along to it live someday, with my fist high in the air.

The second half of About About begins with Procrastination Street. It's one of the more rambunctious tracks on the album, particularly the first half as it barrels through the song, barely pausing for breath. The second half of the track sees Lifewentpear take a more measured approach though. The two contrasts keep the song feeling like there's a lot going on without being overwhelming. The seventh song, Depends, is about learning to live with the flaws of someone you love and accepting them for how they are. The song has a serious tone to it, more so than any of the previous songs. There's also a feeling of sorrow coming from the track that really got me. I didn't really expect to feel like this listening to the song but the depreciative nature of the lyrics, despite the positive message of the song, at its conclusion is a sad time. The guitars at the beginning of Mixed Feelings really built the song up brilliantly and had me excited to get to the vocals. I wanted to sing without even knowing a single word. You just knew that this was going to be a song to throw your fists high in the air to. Luckily the song has enough hooks and melodies, along with some great lyrics, that you can pick the words up pretty swiftly and can get involved with the track. I also enjoyed the use of the English slang phrase "quid."

The penultimate song is titled Shellfish. It has quite a long intro but, rather than building towards a big singing moment, it takes you away and when the vocals do finally come in they take you slightly by surprise. Shellfish really feels like a song that HAS to be played loud, especially towards the end of the song when the vocals get shoutier and more erratic as the singer seems to lose control of his emotions. The final track on About About is named Last Cigarette. It's an acoustic led song but has moments of electric guitar thrown in. The gravelly vocals sound fantastic in this style. The track is full of emotion and I found myself captivated throughout the song’s duration. It's about knowing you need to right some wrongs but finding excuses to stop yourself doing it. This is another song where you can really get a sombre feeling throughout. It's almost heartbreaking.

Over the past year, I've discovered a fair few fantastic German bands and Lifewentpear are another to add to the list. If you enjoy gravelly voiced sad gruff punk then I recommend Lifewentpear to you. I'm hoping they find their way onto the line-up for Hamburg Booze Cruise this year so I can check them out live – I imagine they're really good on stage.