Hearts Of Gold by Dollar Signs has been far and away my most anticipated album of 2021. I’ve been following the band since hearing Yikes in 2015 and have enjoyed watching them grow a bigger and bigger following over the years. In March, Hearts Of Gold was released on Pure Noise Records and it definitely felt like a big occasion. I’ve seen Dollar Signs compared to The Menzingers and Spanish Love Songs in the more mainstream alternative music press but I would certainly say there’s a lot of Jeff Rosenstock in their sound as well. It certainly feels like Hearts Of Gold had a lot of hype and anticipation surrounding it – does it live up to all the positive attention it received? Of course it does. 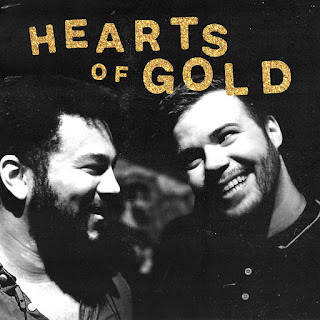 Hearts Of Gold begins with I’m Afraid I Make Yr Depression Worse. The song starts out slowly as lead singer Erik Button and his acoustic guitar tell the sad story of a relationship where one person brings the other one down mentally and emotionally. As the track goes along different members of the band come in before they all join together for a bombastic finale to the track. The energy that builds towards the end of the song coincides with Erik realising that he needs to make himself better to improve the relationship. Up next is Negative Blood, one of three songs that Dollar Signs released in the build up to the album’s release. There’s a chaotic nature to the song that is classic Dollar Signs. I guess this is partly why they chose it as a single. It’s a positive sounding song where Erik sings about how his mental health issues are making him a tougher human being. He’s getting by and surviving despite the hardships life throws at him. I especially enjoyed the lyrics “trying to be more positive but I got B-negative running through my blood.” The third song is named Bonghammer and it is about trying to grow up but always having a reason as to why things don’t quite go as planned. I’m sure there are plenty of people reading this or listening to the song who will heavily relate. I often refer to myself as a terrible grown up. The imagery created with the lyrics “now I got frames for all my posters, I gotta use an old bong as a hammer, cuz I don’t have a toolkit like my father” is sublime.

Sticks & Stones is a short and sad song. It’s stripped back with just acoustic guitar and piano as Erik sings about relapsing but accepting that he’s allowed to have a bad day. Having a song that sounds like this pop up on the fourth track is a great idea as it really grabs your attention and forces you to listen to the lyrics. I’m a big fan of the message that the song puts out and believe it’s important for people to hear. Up next is B.O.M.B.S. which was another track released before the album came out. This was another great choice for a single as it’s so catchy and will quickly find a home in your head. The opening guitars fill the song with energy and as soon as the vocals come in you’ll find yourself wanting to shout back at the band as loudly as you can. The track is about analysing your behaviour and questioning some of your self-destructive acts. I’m very keen to see Dollar Signs live as soon as possible (hopefully at Fest this year) and I can see this song being a big highlight. The last of the three singles released before Hearts Of Gold is up next. Bad News was also released with an excellent video you can watch here. This song really reminded me of Jeff Rosenstock’s Nausea when I first heard it. There’s a musical theatre feeling to the song that gives it so much joy. It’s about sharing your problems and bad news with your friends and hopefully it will at least make things better. This is another song that’s going to be amazing fun to see performed live.

Fistfight! starts the second half of the album. It’s a slow and simple song with the music taking a backseat to Erik’s vocals. This enables the listener to really get a grip of what he’s singing about. The track is about knowing when you’ve been beaten and coming to the realisation that it’s okay to stop and smell the roses from time to time. This leads wonderfully into the next song Nihilist Gundam. Things really go up a gear here, from the slow and steady Fistfight! we jump straight into an up-tempo and chaotic song that really drags the energy of the song back up. Given that the band have made a single video of the two songs being connected by a story, it’s clear that a lot of care and thought has gone into the running order of the songs on the album and I’m a big fan of that. Nihilist Gundam is about behaving in a self-destructive way and realising that it is perhaps time for a change. This song, more than any other on the album makes great use of dual and gang vocals which adds even more to the chaotic energy that explodes out of the song. The ninth song on Hearts Of Gold is titled Falling Off. Falling Off feels like a much more straightforward punk rock song. It starts off in quick and punchy way before the melody works its way in as the band reach the chorus. As the song progresses, more and more hooks and catchy lyrics appear and, in what is true Dollar Signs fashion, things get crazy and excitable towards the end of the song. The song is about being different and accepting that it’s okay. I love the positivity that pours out of the song and this feels like another that will be really special to watch live. Interestingly, the final thirty or so seconds feels like a completely different song where Erik talks about working on himself and how difficult it can be. This felt pretty random but perfectly fitting for something in a Dollar Signs song.
Kiss Me is a short forty-three second song where Erik and bass player Dylan trade lines in a call and response manner before coming together for the chorus. I’m a huge fan of songs that have multiple vocalists as I feel like they can give a song such a big sound. It also really invites a massive sing-along which I’m always into. The track feels like an intro for the penultimate song, I Love You. I Love You sees a great duet from Erik and Phoebe Masteller-Defiance of Dandelion Massacre and I Kill Cameron. The track has a hint of the band’s early folk punk days, as well as a tinge of country thanks to some sweet harmonica fills. The song is about a couple who are madly in love with each other but not being able to express it. There is a sweetness about the song that you don’t often hear in punk songs. This might be a bold statement but, for me, this is one of the best punk rock love songs I’ve heard in a long long time. It puts such a big smile on my face and I urge all you couples to give it a listen. I wish the band would’ve made a video for the song as I imagine it would be hilarious. The final song on Hearts Of Gold is the fittingly titled Hearts Of Gold Finale. Finishing with a stripped back and raw sounding acoustic song was an interesting choice and I did expect the whole band to jump in at some point. This never happened and, on reflection, I’m happy about this and it gives the song a more earnest feeling. Hearts Of Gold Finale is about realising that even though things might seem bad now there is plenty of time for things to improve. There’s a great sense of reassurance that you get from when a good friend looks after you. Such a fitting end to a brilliant album.

I was so excited for this album to come out and it manages to exceed all of my high expectations for it. If Hearts Of Gold isn’t placed highly in my end of year lists for 2021 it means it’s been the best year for music ever. I really feel like Dollar Signs are going to be the next breakout band from the American punk rock scene and I look forward to seeing them play in front of packed crowds in the UK as soon as it’s possible.
Stream and download Hearts Of Gold on Bandcamp here.
Like Dollar Signs on Facebook here.
This review was written by Colin Clark.
Posted by ColinsPRW at 13:38:00 No comments: