Canada is a factory for producing incredible punk rock bands. My latest discovery from that wonderful nation is Saskatoon’s Swayze. The four piece released their EP St Angry on May 15th. After seeing a recommendation from a friend, I knew it was something I had to check out and I wasn’t disappointed. 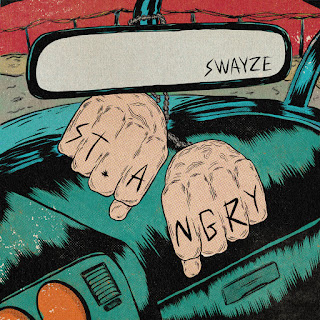 St Angry begins with its title track. This is a great introduction to Swayze for any newcomers. It starts with a pounding drumbeat and some distorted guitars that build the song up before some a great guitar riffs and then the vocals come in. Vocally it’s gruff and raspy and not too dissimilar to Chris Cresswell of The Flatliners. Chris Cresswell is widely regarded as having one of the strongest voices in punk rock so I’m all about hearing something similar here. As St Angry progresses the track gets more and more intense. I found this captivating. As it hits its absolute peak, the song stops dead before building up slowly again for its finale. This was a great way of keep me interested in the track. Up next is Trambopoline. This track shows a more melodic side of Swayze. I believe it also uses a different vocalist as the vocal is a lot cleaner and less raspy than it was on the previous song. At almost five minutes in length, this song is a long one but it really shows off the band’s ability to play their instruments as well as constructing a well thought out track. It doesn’t feel long just for the sake of it. There are highs and lows in perfect moments that really help to get you emotionally invested in the song.

Large Island Iced Tea is a song that’s packed with energy from start to finish. The vocals are clean and drive the song forward at a great pace. I love the raspy vocals as well. For the second half of the song we are treated to a more aggressive, primal style vocal which is accompanied by softer harmonies. This is a great touch to the song that I wasn’t really expecting and really loved. The penultimate song is titled Portrait Of An Ass Grabber. Showing some great variety, this is a one minute and seventeen seconds hardcore track, allowing the band’s third singer the opportunity to shine. It’s the most aggressive song on St Angry by some distance but if you’re more into the poppier side of punk this shouldn’t put you off. The song is full of melody and plenty of moments where you can sing along. The final track is named Gorilla For Sale and features Derek Kuchirka of Me The Guts on lead vocals. This sees Swayze take on a more pop punk sound with a cleaner vocal that can hit some big notes. I found it quite interesting having a guest vocalist sing the majority of the song but it adds even more variety to the EP. The slower pace gives the song more of a big feel and makes it the perfect choice to finish the EP.

Swayze and St Angry are among my favourite discoveries of 2020. Check them out, I really think they will be one of your favourites as well.

This review was written by Colin Clark.
Posted by ColinsPRW at 11:43:00