Mikey Erg is one of the most popular and prolific songwriters of the worldwide punk rock scene so I was kind of surprised that there wasn’t more fanfare surrounding his new four track EP Bon Voyage. I feel like this was mainly because it was released in time for Erg’s European summer tour which was obviously postponed due to COVID-19. Bon Voyage was released by the always brilliant Dutch record label Stardumb Records and sees Erg return to his pop punk roots. 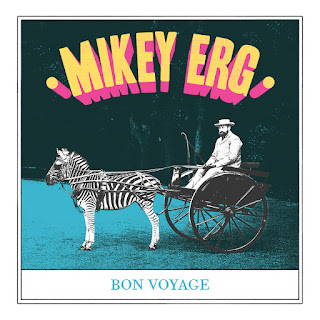 Bon Voyage begins with its title track. The song wastes no time in starting as Erg’s unmistakable vocals welcome you to the song, and the EP, in an explosive fashion. For me, this is Erg at his very best – the song is fast but also so melodic and full of hooks. Interestingly, he has managed to craft an extremely catchy song without the track even having a chorus. The harmonies from Lydia Loveless are a very nice touch. The second track is titled The New Departure Blues. This song isn’t quite as bombastic as Bon Voyage and has more of a similar vibe to his previous two solo albums rather than his work with The Ergs. The song is about coming to terms with the breakup of a relationship and admitting that “you said the wrong things for a long time today.”

The upbeat pop punk returns on Colleen. This song is just pure energy from start to finish and will be brilliant when played live to an enthusiastic crowd. Like all the best pop punk, it’s brilliance is in its simplicity. Each verse is one line repeated four times so it gets stuck in your head immediately. There’s a positive hope in the song as Erg reassures the listener that they are not alone. The final song on Bon Voyage is a cover of The Beatles song Mother Nature’s Son. I know a miniscule amount about The Beatles so had to listen to the original to really know the difference. The Beatles original is a slower track but on Erg’s version he adds a lot of tempo and life to the song and it’s much more my kind of thing. I know that Erg is a big Beatles fan so I assume he had a lot of fun covering the song.

It was great to hear Mikey Erg return to his roots for Bon Voyage. It’s a short and snappy EP that you would expect given his past pop punk history. It’s a massive shame it’ll likely be a year before he is back in Europe but I look forward to hearing these songs live then.

This review was written by Colin Clark.
Posted by ColinsPRW at 15:48:00