Album Review: Get Your Retaliation In First by 3dBs Down

There’s a good chance that despite being a fixture of the punk and ska scene in the early 2000s, you’ve never heard of 3dBs Down. Between 2001 and 2007 the band toured the UK regularly alongside putting out two albums and an EP. Then they decided to take thirteen years off, only playing shows once or twice a year. I’ve been fortunate enough to catch them a couple of times in the past two or three years and have always been so impressed with them, playing their own brand of ska punk with crunching riffs and harmonies that the Beach Boys would be envious of. Paul Smith of Be Sharp fame has told me on many occasions that they are the best band ever – and who am I to argue with Paul? Now the time has come for 3dBs Down to release their first album in thirteen years. Titled Get Your Retaliation In First, this should be an album to release a fantastic band to a whole new generation of fans as well as giving a warm nostalgic feeling to old ones. 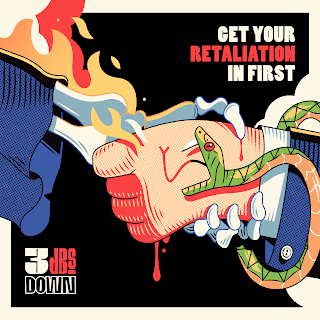 The album begins with At My Signal. Starting with an audio clip stating that men can’t show feelings, 3dBS Down then proceed to play a song about being there for your friends. The duelling guitars that are playing at the beginning of the song really build things up before the lead vocals come in. Lead singer Matt’s soaring vocals sound as good as ever as he takes us through the song. As the song progresses, we get our first crunching breakdown on the album that takes us towards the first display of 3dBs Down’s amazing harmonies. A great introduction for new fans and a welcome back for the old schoolers. Moussaka showcases the ska side of 3dBs Down’s sound. The band will have you skanking immediately on this track that really takes you on a series of highs and lows. There’s so much going on in the song, you’ll listen to it 100 times and still hear something new that you’ll love. Amazingly, despite the song being a hive of activity, it never feels too busy which is impressive songwriting. The gang vocals and harmonies at the end of the song – INCREDIBLE! The third song is titled Count To A Million. The opening two songs had more of a fun feeling around them but this shows a more serious side of the band. From the outset there is a high octane feeling to the song that is about the frustrations towards the selfish “all for one, one for me” culture that has clearly engulfed the country. The back and forth style delivery between gang vocals and Matt singing on his own sounds brilliant and adds plenty of energy to the song.

Up next is Sharpen Your Pitchforks. This song asks the question of “what makes you better?” to people who are very quick to judge. The track actually begins in quite a sombre fashion which caught me slightly off guard (in a good way) but the song does soon build up. Matt’s vocals are wonderful for helping the song grow towards its highest points and I can’t wait to sing along with the song live. Everyone Here Is Better Than You is a mid tempo punk rock sing-along and anthem-like song. The stop-start introduction will get your head banging in no time at all. The vocal harmonies throughout the opening of the song continue to give you the urge to head bang. 3dBs Down really use their ability to deliver these wonderful harmonies to such good effect, it’s like having a fifth instrument. I think they need to do some acapella songs. Idiot Ignorant Evil is a more chilled out reggae number for the most part. You’ve probably realised by now that 3dBS Down can’t just stick to one style in a song. The song has such a summer vibe to it you can imagine sitting in your garden, enjoying a cold drink and having a joyous bop to this song. The track is about being nice to people and having faith in human decency. I loved the positivity that pours out of the song, it put such a smile on my face as I danced around the living room.

The seventh song is titled Pink Cardigan Twinset. One of the more straightforward punk rock songs on Get Your Retaliation First, the track would fit perfectly on all of your skate punk playlists. On this song, 3dBs Down tackle the culture of putting on a front to try and get ahead in life and how it’s a temporary solution. Up next is a short song named Well that seems to be more of an interlude than anything else. It’s a softer song that serves as an introduction to the ninth song, Flat Out. Flat Out (which is appearing on our next CPRW Records compilation) shows off a heavier and more eerie side of 3dBs Down. It’s a positive song about constantly learning and evolving to continue to move forward. Midway through the track we get a breakdown that has a sample of Well that leads us towards a crunching, epic finale that will sweep you away. Hang In There Man is a track that the band have been playing live in recent years. Whenever I’ve seen them play it, it’s got me so excited for the band to release this album. It jumps back into the ska punk style and those superb upstrokes that make you want to dance with all the joy in the world flowing through your body. Hang In There Man is about looking out for your mental health and trying to find positives. I feel like I could say this about every song on this album but, oh my, the harmonies are so bloody good.

I was so sad that Greatest Day wasn’t a Take That cover. It is however a very good ska punk song about being positive about the future with the stand out line being “tomorrow could be the single greatest day of my life.” The theme of being positive pops up a few times of the album and it’s a refreshing change from the current trend of bands singing about how sad they are. I have to admit, the song’s finale is slightly poppy and cheesy but my goodness it had me grinning from ear to ear and singing along. The penultimate track on Get Your Retaliation In First is titled Institution. This is a chilled out reggae/dub track that will have you swaying along. This is a more political song that looks at fighting back when you’re feeling oppressed and not letting the institution win. This slower style adds so much power to this song as it has you really listening to the lyrics deeply. It’s a quite stunning vocal delivery that can’t be ignored. The thirteenth and final song is Light On A Dark Day. This, if you can believe it, is an eight minute long ska punk song. I thought Just Say Nay were the only band silly enough to attempt such a mental idea! Clearly I was wrong. 3dBs Down manage to squeeze a lot into a standard length song so just imagine what they’re able to do with eight minutes. There’s so much going on here, I don’t really feel like I can do it justice to even try and review it properly. Be safe in the knowledge that there’s big riffs, ska upstrokes, sing-alongs, harmonies, skankable moments, it’s full of positivity and it’s bloody brilliant.

In short, this album really was worth the thirteen year wait. Go and listen and if you’re unfamiliar with 3dBs Down’s back catalogue, go and educate yourselves. I hope that the release of this album means that the band will be playing more live shows in the future. Welcome back!

Stream and download lead single, Count To A Million, on Bandcamp here. Get Your Retaliation In First will be released on 31st July.

This review was written Colin Clark.
Posted by ColinsPRW at 10:45:00