Brooklyn, New York’s Hot Knife came together when bass player Vic Castello and guitarist Ryan Weber were at a bar talking about how they wanted to start a new band. It so happened that Vic, new vocalist Luke Taylor and Ryan knew a drummer named Matt Ferraro (Candy Hearts) and Hot Knife was born. It can be that easy. This was in 2015 and since then they have released a single and two EPs. Their latest EP is titled Dread and was released in April 2020 on Black Numbers Records. In case you haven’t realised yet, that’s what we’re reviewing today. 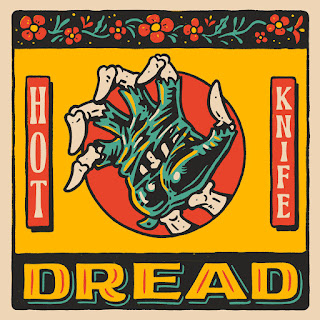 Dread begins with the song Rude. If this is your first time listening to Hot Knife, like it was mine, then you’ll be greeted with a punk rock style that is verging on skate punk. I’m slightly reminded of Pennywise here, particularly in the vocals. It’s a mid tempo track with the verses providing the song’s energy and drive and the chorus being the moment that will get a crowd singing along – fists held high in the air. A solid start to the EP and a great introduction to Hot Knife. The second song it titled Space Weapons. On this track, Hot Knife mellow out slightly with a poppier sounding song. Luke’s vocal becomes softer showing a vulnerability to Hot Knife as he sings about his anxieties. This makes the song really relatable for anyone going through similar issues. During the track, there’s a great section that seems to show a big Descendents/ALL influence that I really enjoyed.

Track three, Top 10 Habits Of Highly Successful People, was released as a single before Dread came out. It is about how people who are seen as been higher up in society very often look down on people who aren’t as successful as they are. Perhaps inspired by Lookout Records era pop punk, Hot Knife show off another string to their bow here. The penultimate song is titled Rippin Buds, Rippin Buds. Things get a bit harder and more intense here. It’s only a short song with a snappy, pounding background. After the intro, I kind of expected it to go into a fast paced hardcore song but the band show a great amount of restraint and keep it reigned in. The final song, First Street, sees Hot Knife return to the pop punk style that they do so well. It’s a super accessible, kind of easy listening style that even people who – for some reason – aren’t fans of punk would enjoy. There’s a bit of a sombreness to the vocals, particularly in the verse. The chorus seems to get a bit more upbeat which will encourage listeners to sing along.

I discovered Hot Knife and Dread thanks to Bandcamp day a few weeks ago and I’m very pleased that I did. It’s a bit of throwback to a style I really enjoy but doesn’t feel dated at all. Given the names involved with this band, it’s no surprise that this is a really good band and I look forward to seeing what’s next for them.

This review was written Colin Clark.
Posted by ColinsPRW at 17:14:00