Bad Time Records are without a doubt the best ska punk label in the world at the moment. It seems as if everything they release is absolute gold and with every announcement they make I know I need to check out the bands. On the 5th of June the label releases a new four song split featuring Catbite and Omnigone. On the four song split, the bands cover one of each other’s songs as well as covering a classic punk song from the past. Both acts are among the hottest in the scene right now so I was very keen to check out the split. 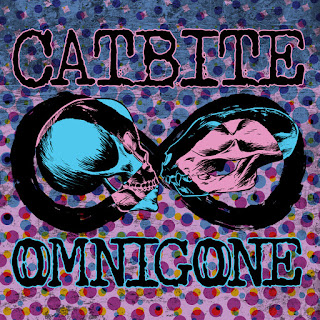 Philadelphia’s Catbite are the first band up. They decided to cover Omnigone’s Horizontal Aggression. Omnigone’s original version of the song is more of an upbeat skacore style. Catbite’s take on the song sees them add some organ and it gives the song a more traditional ska sound. I felt like this actually really helped to get the song’s message of unity coming across even more than on the original. Catbite’s classic cover is White Riot by The Clash. This song doesn’t stray too far from the original. The band do a great job of retaining the energy and spirit of the track. It’s a brave decision to cover one of the most well known songs of a band as legendary of The Clash but Catbite certainly do it justice.

Omnigone kick off their side of the split with a cover of Catbite’s Scratch Me Up. Here Omnigone take a song that has more of a traditional two tone ska song and transform it into a hardcore song. Interestingly, reading the promo notes, Omnigone’s Adam originally wanted to do a ska punk cover of the track before he was convinced to turn it into a hardcore song. I absolutely loved this version almost as much as I love Catbite’s version. You can tell that the band had a lot of fun doing it as well. Omnigone’s other track on the split is a cover of Nothing New, a song that’s probably best known as a Link 80 song but was originally written for Omnigone’s Barry’s old band, Blast Bandits. (In case you didn’t know, Adam and Barry of Omnigone are both former members of Link 80). This version of the song feels more stripped back without the horns of the Link 80 version but still retains all of its energy.

This is such a fun little split by two of the best ska punk bands to emerge over the past few years. If you like these songs, I really urge you to check out both band’s most recent albums. If you’re a fan of ska punk, they are essential for your collection.