Like a lot of people, the COVID lockdown has meant I've been able to spend more time than usual checking out new bands. Once of my favourites I've discovered over the last few months is Baltimore's Panic Problem, a three piece pop punk band who released their debut album, Just Stay Calm, a couple of months ago.

Formed in 2018, but by three people with plenty of experience – Neal Page, Tom Gilhuley and Sue Werner from War on Women – the band remained a three piece after Werner departed due the rise and rise of WOW, being replaced by Jeff Brigman on bass.

Just Stay Calm is the band's debut album, although it does include four songs that were originally released on their debut EP. Not a problem for me as I'm new to the band, but I know some people can be a little disappointed when albums include 'too much' previously released material. That aside, it's 11 absolutely pure pop punks bangers, that was recorded with Pete Steinkopf from the Bouncing Souls, resulting in songs that sit in the same mould as a lot of fast, anthemic bands with that early 90s sound. Think Lagwagon meets Sicko (and if you don't remember Sicko, you should check them out – they were the early 90s pop punks that should have gone on to world domination, not Green Day). 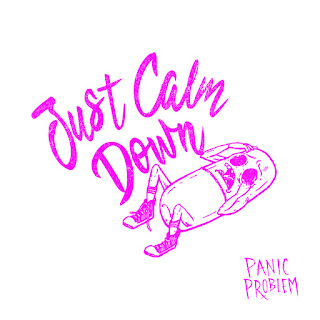 As the band's name, and indeed album title suggests, much if not all that they sing about is associated with mental health issues. As I sit here writing this in the middle of Mental Health Awareness Week, whilst most are still in some form of lockdown/isolation, it strikes me that even though the sound is similar, pop punk (and of course, much of society) has come a reasonably long way and it's great to hear so many bands address this subject so openly now. There's still some way to go, but bands like Panic Problem really do help encourage a positive culture in association with mental health. (By the way, you can still grab a download of CPRW's birthday comp on Bandcamp, with all proceeds going to the UK mental health charity Mind if you haven't already done so.)

But don't be fooled into thinking this album is going to be a solemn or introverted affair given its subject matter. Far from it. It's upbeat, feel good, positive and celebratory. As it should be. The first song, Time Flies, lets you know exactly what you're in for – a cocktail of fast guitars, relatable singalong lyrics and a super catchy chorus.

What follows are 10 more tracks in a very similar vein. There's not a great deal of variation with these, again a bit like a lot of those great pop punk albums that came before, which is just fine by me! But of course everyone will have their favourites on the album, mine being Works Suck In General, Stormy Weather and I Hate Tuesdays, but I'm sure anyone can easily pick out three completely different tracks. If you can manage to remember what it was like to be in an audience, try then to picture that whole audience singing along to every song a band plays. That's what I imagine will happen once these guys eventually get to play these songs live again. All pretty similar, but all audience favourites.

I don't think Panic Problem have set out to be anything other than what they have done with this album. Some might say we heard all this way back in the 90s, which might be true, but that's not to say that it isn't any good. There may have been a lot released back then that I really don't like, but it was also a bit of a golden age for this type of pop punk that Panic Problem have once again captured here.

Like Panic Problem on Facebook here.
This review was written by Chris Bishton.
Posted by ColinsPRW at 12:11:00