Today I’m excited to review a skacore split brought to you by the fantastic folk from Bad Time Records and featuring Nashville’s Stuck Lucky and Still Alive from Chicago. The split came to my attention because it was released by Bad Time Records and I’ve featured Still Alive a number of times before. This was my first exposure to Stuck Lucky though (the beauty of a split release) and I was excited to find a new favourite band. 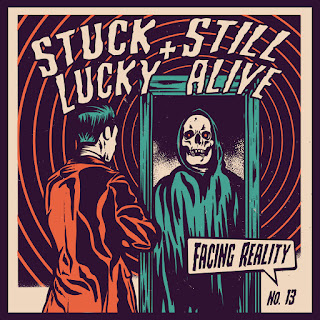 Stuck Lucky take on the first side of the split with the song Spells And Tails. This was my first experience of Stuck Lucky and I was instantly impressed. The band starts the song by quickly building things up, with each instrument coming in adding something different to the sound. When the vocals come in I’m kind of reminded of Sweeney Todd who sang for The Dead Pets and Everybody Out (that might be a niche reference). Kind of an intense street punk style is the best way of describing it. The song also features plenty of gang vocals and harmonies and the band manage to give the song a spooky an ominous feel. It feels as if Stuck Lucky have their own unique style and I’m into it. Close 2 Hell is a twenty six second noise track that, if I’m honest, I’m not really sure of the point of. Father Mercy gets things back on track though. The tempo seems a bit slower but the vocals feel much more intense and really pull you into the song. I was surprised to learn that Stuck Lucky only have one brass player, the trombone sounds massive and adds so much to the song. Stuck Lucky’s third song is titled Like A Possum. This is a very trombone heavy song and is perhaps my favourite on this half of the split. The trombone will get you dancing whilst the fantastic amount of gang vocals will get you shouting along with the band with your fist held firmly to the sky. Stuck Lucky’s final track is probably the most traditional sounding skacore track on their side of the split. For the first time they use two vocalists trading off lines. This is something I always enjoy. It keeps the song sounding fresh and adds plenty of energy. It also features some superb harmonies that I’m always such a sucker for.

Still Alive kick off their half of the split with Razor Blades. The song starts off quietly before exploding into life. Still Alive certainly lean heavily on the hardcore side of the skacore genre in their music and this is evident immediately, though they do implement little bits of ska and reggae during the track. The song is politically themed, tackling the subject of why do we do what are leaders tell us to when we know they are corrupt. I really liked the line “how can we rise with our feet in cement.” 24 Hours begins with an audio clip of running water before a heavy bass line begins to build up the song. Here, Still Alive show off their reggae influence for the majority of the song before it builds into the more hardcore side of their sound. It’s interesting that the band manage to blend two genres that aren’t natural bedfellows so easily. Switchblade Architect is a five minute long post-hardcore song. The song begins in a relentless fashion, with Still Alive melting your face off. As the track progresses, they add some melody and a fantastic guitar solo with another dash of reggae before finishing as relentlessly as they began. If you want a song that will have people losing their minds in the pit then this is the one for you. The penultimate song on the split is named Exposed. Changing things up, now the band play a just over two minute track that packs in so much ferocity you can’t fight the urge to get those devil horns high in the air. We finish with Ransom Note. This is a song about how so many people die in the USA because they can’t afford to pay health insurance. Coming from the UK where we’re very lucky to have the NHS, it’s shocking to me that anyone has to pay for healthcare. It’s disgusting. This was probably the song that hit me hardest on the split and it’s a perfect choice for a final track as is leaves you walking away outraged about this situation.

Listening to this split on a sleepy Tuesday morning really woke me up. Having both bands on this split was a great idea. They work well together but also are different enough that they add variety to the split. I was already a fan of Still Alive before this split but I’m now keen to check out more of Stuck Lucky. I guess that’s the point of a split release.