It’s always nice to discover bands from parts of the world that aren’t your first thoughts when looking for punk rock. I’m not familiar with the New Zealand punk scene at all so it was a great surprise when I discovered Melanie whilst trawling through Bandcamp Discover. The four piece are from Auckland and formed after playing “shitty pop punk covers” at a house party. On May 1st they released their debut album titled 42 Losers. After previewing it a little, I was very impressed and couldn’t wait to hear more. 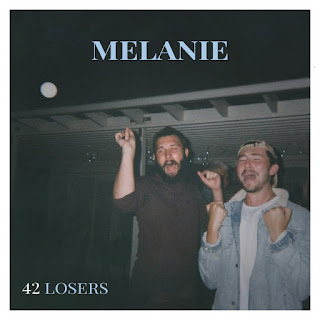 42 Losers begins with Hollywood. After quite a long jangly, distortion filled intro, it builds up to James Dentice’s raw vocals opening up the song. Those vocals were a really startling way to begin the album and had me interested to see where it would go. As the track progresses, the vocals get a bit cleaner but there are flashes of intensity that keep you invested. Playing their own take on the Midwestern emo/punk sound, this opening track really shows you what Melanie are all about. I loved the energy that the second song, Collide, brought to the table immediately. The track begins with some high tempo vocals and a subtle guitar part, that it slowly joined by some drums and then the whole band before we get to the main portion of the song. Things are slowed down slightly after this attention grabbing start. From then on, I found myself captivated by the song and particularly the structure of the vocal delivery. There’s this fantastic melody that you can’t help but want to follow along. The song then ends with a long and grungey finale. The third track sees Melanie change things up with a happier and sunshine filled song name Dead Starlet. The highlight of the track is undoubtedly the chorus which you will be singing along with very soon. Even though the song sounds quite happy, obviously with this being an emo band it isn’t. Dead Starlet is about not having enough time with someone who you cared deeply for and struggling to deal with that.

Year Six Speeches is probably my favourite track on 42 Losers. It has a long and impressive intro with Joe Gasparich’s drums really standing out before things get a little quiet and the vocals come in with a bang. At this point, I’m a bit in love with James’ rawer vocal style and how he can so effortless flit between the raw and clean style. This is an insanely catchy song that will lodge itself in your head pretty quickly. Try not singing along to this track, it’s very hard. The middle section of 42 Losers contains two songs that are nearly five minutes in length. The first is Bill’s Riff which I’m guessing is named after the impressive bass line that William Dentice plays throughout the song. This is a slower song that rumbles along and features some longer musical interludes. This all adds to the ride that Melanie take you on during the track. The song is about being on the verge of a mental breakdown and trying to get help to calm you down. As the song progresses, the vocals become more intense which creates some great imagery for the level of the breakdown. Kachow! begins with a short audio clip of a somebody asking for a “fro-co” which is a frozen coke. I have literally no idea what this has to do with the song but I did find it amusing. Kachow! really allows Melanie to show off what an impressive group of musicians they are as it’s mostly instrumental. There are two short verses during the song but it’s really a vehicle to show how talented they are.

The seventh song is No Shoes. No Shoes was used as the lead single for 42 Losers and it’s clear to see why. It’s an uptempo song that you can jump and dance around to as well as a track that will get stuck in your head. It’s also super relatable as it’s about dealing with the anxieties about growing up. The band also made a lockdown video for the track which you can find here. Triple Knot is up next. Perhaps more so than any other song on 42 Losers, Triple Knot plays around with tempo and melody a lot during the track and this makes it a very interesting listen. At times, you don’t know whether you’re coming or going and not don’t know what’s going to happen next. The unpredictable nature of the song plays in with the overall theme of self doubt that plays out during the track. The penultimate song is titled Half To Death. Half To Death is a completely instrumental track that’s eerie and atmospheric, takes you on a series of highs and lows and it generally an epic listen. 42 Losers is finished with Maude St. I did a little Google and discovered Maude Street is an actual place in Auckland so I can only assume that this song is based on true events. This track sees Melanie amp the tempo back up to conclude the album with an energetic flourish. Except that’s what you’re thinking until things slow right back down for the ending of the song and it just fades out. It very much feels like a ‘to be continued’.

Emo/punk isn’t usually my go to when I’m picking something to listen to but I can see myself going back to 42 Losers again and again. Melanie could be considered one of the bright new bands in the emo scene. If they were based in the northern hemisphere I could see them on the same line ups as bands such as The Menzingers, Spanish Love Songs and Joyce Manor and other top bands in the genre. Hopefully one day, they’ll find their way to this part of the world and we can enjoy what I can only imagine is an exciting Melanie live show.

This review was written Colin Clark.
Posted by ColinsPRW at 12:20:00