The Scuts are a three piece pop punk band from London influenced by the likes of NOFX, No Use For A Name, The Offspring and Descendents. Originally an acoustic folk duo before growing into a electric three piece, the band have recently released their second album named Net Profit. Let’s see what it’s like. 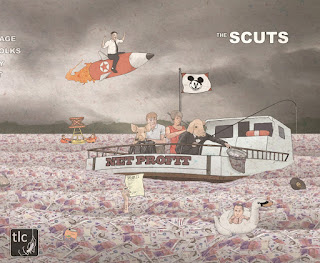 Net Profit begins with a short song named Sony (Suck My Boney). This track is only twenty four seconds long and starts out a bit folky before finishing in a rowdy fashion. It’s about how punk rock isn’t cool and fashionable and gets ignored by the major labels. London Living Slave feels like the first proper song on the album. It’s an uptempo pop punk song about struggling to get by on the living wage. It’s fast and punchy but is also underlined with some sweet harmonies. The song has a great sing-along quality that will unite a crowd of people who are probably all struggling with the same thing. Punk rock always does a great job of showing people they are not alone. Generation Rent is about how rent is becoming unaffordable in many parts of the country and how landlords take advantage of people. Sadly this is a big problem in the UK but it’s great to hear a band shine a light on this issue. This is another hugely relatable song that will unite the people listening to it. That’s All Volks is a slower and more melodic song where you can hear the band’s Offspring influence. The track is about how big global corporations often have ties with fascist organisations and that we should fight against them. It’s an interesting listen that really makes you think about who you give your money to.

The fifth song, Monet, begins in a pretty sombre fashion before jumping up a few gears and becoming a full on melodic punk track. NOFX are clearly a big influence on the sound of the track, particularly their song Leave It Alone. UK Minimum Wage sees The Scuts showing off their folk punk origins. This really adds another element to the album and keeps it feeling fresh. It’s about how the minimum wage doesn’t go up as quickly as price inflation. This means many people struggle financially whilst the rich people just get richer. The Scuts take aim at the Conservative government who have willingly let this happen. What a bunch of bastards the Tories are. X-Fucktor sees The Scuts jump back to a skate punk style for a song where they talk about people’s obsessions with TV talent shows and how people use them as stepping stones to get famous rather than earning it the more traditional way. Coming from a punk background that values DIY ethics very highly, seeing performers earn their stripes in this way is something that is very frustrating and I completely relate to The Scuts on this track.

Hypnocratic is a mid-tempo track about how political parties lie to you to make you vote for them and that eventually people will begin to see through these lies. It took me far too long to work out the pun in the title of this track. Given the subject of the song, you might expect it to be an angrier sounding track but in truth it’s pretty uplifting, particularly when they sing about the revolution that will come soon enough. The ninth track on Net Profit is named Getting Lucky. On this track The Scuts step away from the politics and play a song about some misadventures in sex. It’s all a bit silly and doesn’t really feel that in keeping with the album. That said, punk rock doesn’t always have to be super serious and should also have a sense of humour. Plagiarism is the title of the penultimate track. It’s a tongue in cheek song about ripping off other band’s music and lyrics and claiming it as your own. Throughout the song, there are little nods to other band’s songs that are quite fun to try and pick out. Net Profit is finished by Hey Sister, Seoul Sister. After a long audio clip talking about North Koreans moving south, we are treated to the heaviest song on the album. I really enjoyed hearing The Scuts head in this direction and think it was a great way to finish Net Profit.

Net Profit is a fine pop punk album from a London band that I wasn’t too familiar with before. They don’t really reinvent the wheel here but it’s a fun listen and they touch upon many important subjects that people need to listen to. For the most part, they talk about more local political problems which makes the album really relatable for me.

Like The Scuts on Facebook here.
This review was written by Colin Clark.
Posted by ColinsPRW at 12:17:00