The last time we reviewed The Raging Nathans on CPRW was their 2018 album Cheap Fame. Since then, they’re released splits with Dead Bars, Starter Jackets, Parasites and Jon Cougar Concentration Camp as well as compilation of all of their 7”. Not a band that like to rest, now they are getting ready to release a brand new full length titled Oppositional Defiance on Rad Girlfriend Records (USA) and Brassneck Records (UK), on 24th July. One of the hardest working and most prolific pop punk bands in the scene, when this arrived in my inbox I was very excited to check it out. 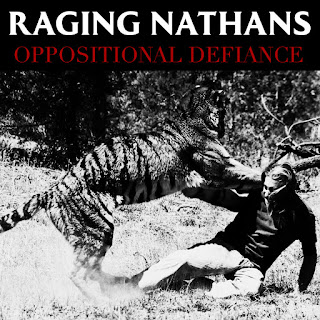 The album starts with Tragedy Ghouls: An Introduction. As you should have guessed, this is an introduction for the album. Layered over the top of a pop punk song, there are audio clips of news pieces talking about gun violence. It’s a startling but powerful way to start the album and really makes you think. Following this, the album begins properly with the song One Day Closer. This is a fast paced and frantic song that hooked me in immediately. The song manages to keep its tempo throughout and remains super engaging for the whole duration as well. Despite the tempo, it’s still super catchy and will receive some huge sing-alongs – assuming people are fit enough to keep up with the vocals. The song is about being angry with your place in life and not being able to change that. The chorus is one that I’m sure is relatable for a lot of people, “every day I’m alive I’m one day closer to death.” Where Ya Been? has a throwback 90s sound to it and is definitely a song for the summer. There’s an upbeat breeziness to the song that put a smile on my face. On the track, The Raging Nathans sing about getting reacquainted with an old friend and seeing a change in them. I’m sure that we’ve all experienced that. When looking over the track list before I listened to Oppositional Defiance, the next track, Don’t Miss The Train, stood out to me. I wondered if it was a No Use For A Name cover. It’s not. It is however a smashing track that shows off a more restrained Raging Nathans. The wings are mostly clipped with everything feeling sharper and to the point on the track. It’s about looking back on the things you did when you were younger and deciding it’s best to leave them there.

Parole Violation sees The Raging Nathans go down a different route. Turning everything up to eleven, including their anger – this is a full speed hardcore song and I love it. It’s full of passion and energy and will certainly get a circle pit going whenever they play it live. The track really allows Christian Roerig to show off just how good he is as a bass player with some great rumbling basslines pushing the song forward. The sixth song is titled Signals. Reverting back to the band’s more traditional pop punk sound, Signals is about the frustration of not being able to read people and feeling bad about it. There’s such a slickness to the song. It feels like a lot of time has been spent crafting these songs so they’re perfect. The backing harmonies in particular are a superb touch on the song. It’s a subtle extra layer that brings a lot to the track. Outside wastes no time in getting started. During the track, lead singer Josh Goldman sings about feeling ostracised and asks if you know what that’s like, as well as wanting to find a way of fitting back in. There’s a definite 90s skate punk feel to the song, particularly No Use For A Name who always edged towards the poppier side of skate punk. Up next is You Are Not Me. This was one of my favourite tracks on Oppositional Defiance. It’s about those people who always have a better story than you and look to one up everyone. What The Raging Nathans are saying is that those people are jealous of what you’ve achieved by yourself. The song has a great barroom sing-along feel to it; arms wrapped around your friends, fists in the air shouting as loudly as you can – a great time!

The ninth song is titled Big Mouth. Big Mouth certainly has a feel of The Copyrights about it with the buzzsaw like guitars and big gang vocal chorus. There is an in your face nature to the song that fits the song’s theme perfectly. It’s about, like the chorus states, having a big mouth and not being able to shut up. This is such a catchy chorus that you will be singing for days after listening to the song. Stargazing is about missing your loved ones, perhaps due to being away on tour. This is one of the poppiest songs on the album, showing off a softer side of the band. The song is quite a simple and repetitive one that you will latch on to quickly – this really made it stand out on my first listen of the album. I enjoyed the irony of the harmony during the line “so alone”. The penultimate track on the album is titled Old Blood. Old Blood really brings the pace back up. Opening with some rapid fire vocals and an uptempo melody, it gives the album an adrenaline shot just as it begins to finish. Musically it’s relentless from start to finish with the vocals supplying most of the melody. Oppositional Defiance is finished with Spoiled Brat which originally appeared on their split with Parasites. Making sure to finish the album with a bit of a flurry, the song has quite a long intro that builds into some of the most passionate vocals on the album. The song is about not appreciating what you have and what you’ve done and then realising that that is a stupid thing to be doing.

Oppositional Defiance is another superb addition to The Raging Nathans discography. It could be, in fact, their best release so far. It is definitely one of the best pop punk records of 2020.

Pre-order Oppositional Defiance on Bandcamp here.
Like The Raging Nathans on Facebook here.
This review was written by Colin Clark.
Posted by ColinsPRW at 16:20:00