I’ve been on a bit of a roll for reviewing splits lately. After two ska punk reviews, here is one for some Austrian pop punk. I’ve been a fan of 7 Years Bad Luck for a number of years and have been lucky enough to see them live a couple of times in the last year or so. Dorkatron are a newer band who I fell in love with immediately after hearing their The Extra Mile EP in 2018. 7 Years Bad Luck and Dorkatron recently teamed up for a twelve song split which was released by Monster Zero Records. 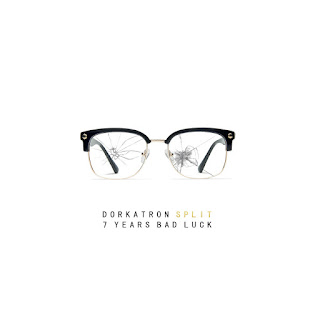 Dorkatron kick of their half of the split with the song Robotic Love. Robotic Love is a weird love story between a human and a robot. If you’re new to Dorkatron then this is a great introduction. The band plays fast and catchy Ramonescore pop punk, very often with a nerdy sci-fi theme. Up next is Custodians. Inspired by a solo from a Fidlar song, the track is about feeling uneasy about custodians. Fast, catchy and fun with witty lyrics, Dorkatron have a style and they absolutely excel at it. I really like the guitar riff in the song, it gives the track a great energy. Shop Class Baby is a story about falling in love with a girl in your shop class. Another theme of Dorkatron’s is high school and often falling in love with different girls. I’m glad to see they haven’t stepped away from this theme on the split. It’s a relatable topic for fans of pop punk.

Hall Monitor sees Dorkatron actually slow things down a little. It’s a pop punk ballad dedicated to the people who care about safe and respectful behaviour at school. It’s great to hear the band slow things down and show a different side of their songwriting. The chorus is the standout moment and features some great chant-along harmonies that will get the listener invested straight away. My Girl is a thirty second song where Dorkatron proclaim that a girl is theirs. It’s short and sweet, really repetitive and a whole lot of fun. The final Dorkatron track is titled Pills. Starting in explosive fashion, Pills actually sees a more mid-tempo and melodic side of Dorkatron. It also feels more serious as the band sing about becoming reliant on medication to help you stay awake to study, because you don’t have enough time, and then regretting taking it. It’s quite a sombre finish to Dorkatron’s side of the split.

7 Years Bad Luck begin their half of the split with Comatose. The three piece play a more melodic style of punk rock than their counterparts in Dorkatron but that doesn’t mean it’s any less catchy. This half of the split already feels a lot more dramatic and emotional thanks to the builds spread throughout the song as well as some great gang vocals. Up next is Out. Starting out with a crunching introduction before some fantastic fast paced vocals, this song has a slight feel of the 90s skate punk sound to it. The song is a more political one about wanting to question decisions and realising that, no matter how hard you fight, it will always feel like an uphill battle. You, The Ocean And Me shows the poppy side of 7 Years Bad Luck and also has a bit of 60s rock ’n’ roll sprinkled in. It’s the sort of song that instantly cheers you up and has you bopping along in your seat. This is a sweet, summery love song about needing your loved one around and missing them when they’re not there.

Better Joke is a song dedicated to that friend who likes to play the joker but often takes it too far. This song has the more traditional 7 Years Bad Luck sound, melodic pop punk that brilliantly pulls you in. There’s a seriousness about the track and also a sadness in the vocals that plays with your heartstrings somewhat. The penultimate song on the split is titled Milk Teeth. Jumping back into the skate punk style, there is a driving tempo that gives the song plenty of urgency. It has you yearning to know where the song is heading. I think this is mainly due to the drumming. The beat really stands out on this track. There’s an understated style to the vocals. They feel a little quiet and this makes you really listen hard, as well making you anticipate something louder coming in. The split is finished with Movie Star. This feels like a final song. By that I mean that there’s a sense that 7 Years Bad Luck put everything they have into the song. It sounds bigger, it’s full of hooks, it has shifts in tempo and it’ll have you singing along happily from start to finish. There’s also some subtle “whoa-oh” harmonies to get involved with.

This is a fantastic split by two of Europe’s best pop punk bands. As you would expect from a Monster Zero release, it’s quality from start to finish and, if you’re not familiar with either of these bands, it’s a great place to start before checking out their previous work.

This review was written by Colin Clark.
Posted by ColinsPRW at 17:11:00