Articles are a three piece from Gainesville that I very much hope to see at The Fest this year. Fingers crossed it can happen. I recently featured them on a top ten bands I’ve discovered during lockdown and I enjoyed them so much I wanted to review their latest release. In March, they released two new songs titled Smoking Section and Pool Noodle. Here’s my take on them. 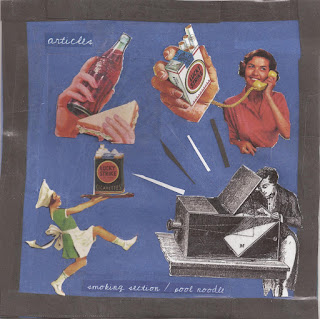 Smoking Section is the more uptempo of the two tracks. The first thing that you notice is the Brendan Kelly-esque raspy vocals that give the song a great feeling of urgency. On the track, Articles deal with the topic of growing up and realising that life hasn’t gone the way that you wanted it to. They paint a great picture of being stuck in a plain office and thinking back to your days in school making big plans.

Pool Noodle is a slower track that instantly felt more serious than Smoking Section. The introduction has a powerful opening and when the vocals come in they don’t seem as urgent, focussing more on getting the message across rather than filling the track with energy. Pool Noodle is about people being radicalised into doing terrible things in the name of religion. It’s a heavy song that really makes you think.

This is a great introduction to Articles if you’re new to the band. It shows two different sides of the band and certainly left me wanting more. Since hearing this release, I’ve been spending some time going through their back catalogue and it does not disappoint.