In 2019 London’s Modern Shakes released my favourite EP of the year with their debut Murmur. Obviously not a band to rest on their laurels, the band went back into the studio in December 2019 to record their next EP, Someday, One Day. As soon as I found out about this, gee whiz I was excited. In my opinion, Modern Shakes are one of the best new bands in the UK at the moment and deserve your attention. Playing melodic pop punk music inspired by bands such as The Lawrence Arms and Banner Pilot, Modern Shakes are the perfect band for you if you’re a fan of that Fest sound. 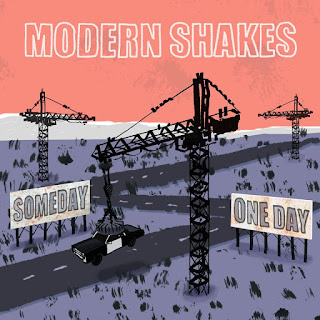 Someday, One Day begins with the song Fair Do’s. We were lucky enough to be asked to premiere the lyric video for the song so I was already aware of how good it was before I heard the EP. Those buzzing guitars at the start of the track immediately got me excited and when Ian Crook’s unmistakable vocal comes in I knew this was going to be another cracker of an EP. Starting off in superb, high tempo fashion hooked me in right away. This really is exactly how I love my punk rock. It fills me with energy and I want nothing more than to passionately shout along with the song. Perhaps taking a little page from their friends Burnt Tapes’ playbook of referencing older material, there is a great nod to Murmur and the song Freefall. Cruising slows things down a bit for a more tender sounding Modern Shakes. This is my first time hearing the band like this and I really enjoyed it. Ian’s vocals are able to do the rousing fist in the air punk rock but he can also get you emotionally. You should also check out his solo acoustic songs in Wayfairer. The song sees the band in a reflective mood, looking at the break up of a relationship due to people changing at different speeds and how it affects them.

The third song, Chew, isn’t quite as punchy as I’ve come to expect from Modern Shakes songs. Adding some indie punk style to their sound, it shows another side of the band. Drummer Dan Conant does a fantastic job in building the intro of the sound with a powerful beat. Cruising is the song on the EP that allows the whole band to show off their skill as musicians. Bass player Sam has some intricate sounding bass lines sprinkled through the song and guitarists Ian and Ian (not a typo, two guitar playing Ians) work together brilliantly. Chew is about realising that you need to make a change in your life, even if you don’t want to admit it. The final song on Someday, One Day is titled Spinning. The song starts slow before jumping into life with a return to the more uptempo Modern Shakes sound. They have managed to do that wonderful thing of making a final track feel like a final track with a catchy melody, a chorus that grabs your attention and some wonderful builds. The song has a bit of a party feel to it. I can imagine being in a crowd of people having one last sing-along to the band. It’s a hugely relatable song about feeling stuck in a rut with your life whilst the people around you seem to be making great progress.

I knew I was going to enjoy this EP before I heard it but I didn’t expect it to blow me away just like Murmur did. The band have had a line-up change or two between EPs but have still managed to release an absolutely first class EP that should see them gain more of a following. Before I heard Someday, One Day, I would tell everyone and anyone that Modern Shakes are one of the most exciting bands in the UK punk scene and this EP has really backed up my claims. Well done guys.

Someday, One Day will be available on all platforms on 1st July. Meanwhile, stream and download Fair Do’s on Bandcamp now here.

This review was written by Colin Clark.
Posted by ColinsPRW at 12:33:00