Throughout the end of 2019 and the beginning of 2020, the big question on the lips of everyone in the UK DIY punk community has been Who Are Knife Club? The band have been booked for plenty of gigs and a couple of big festivals including Rebellion and Manchester Punk Festival but few people knew who they were and what they sounded like. This was a great way to drum up intrigue and promotion in the build up to their first shows and first album. Unfortunately, due to COVID-19, those gigs and festival appearances got postponed but our friends at Shout Louder did announce who Knife Club are – Zoë Barrow (Casual Nausea/Mousebrass) on vocals, Eliott Verity (Nosebleed) and Dan Flanagan (Haest/Matilda’s Scoundrels) on guitar, Dani Rascal (Faintest Idea) on bass, Big Hands (Revenge Of The Psychotronic Man) on drums and Andy Davies (Revenge of The Psychotronic Man) on vocals. That's a DIY punk supergroup right there. It was also announced that the band would be releasing their debut album, We Are Knife Club, on TNSRecords as well as 5 Feet Under Records (Denmark). This was going to be one of the most anticipated albums of 2020 but would it live up to the hype? 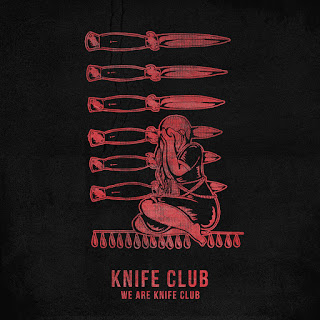 As you might expect from a band which features two members of ROTPM, We Are Knife Club is twelve songs long and goes by in just twenty-one minutes. Starting out with Making A Big Deal Of It, this track really sets the tone for the entire album. Andy and Zoë trading vocals back and forth between one another as the rest of the band play in a thrashy style. I'm not generally a big thrash fan but on this song, and throughout the album, I found the urgency infectious. Up next Schnitt mit dem Küchenmesser which translates to Cut With The Kitchen Knife. When translated into English it turns out that Cut With The Kitchen Knife can be a very catchy lyric, no matter and what speed it's sung at. This is one that'll be in your head for days whether you like it or not. Remember The Gold Dollar Sign Hoodie was the lead single from We Are Knife Club and was the world's first chance to hear the band. The song is about how people try to take advantage of the good nature of the DIY scene and attempt to get guest list for £5 shows. Obviously the band don't like this attitude and lament people who try it. The song was a great choice as a lead single as it really showcases the DIY ethics of the band and shows they won't be taking any prisoners.

Artex sees Knife Club venture into the territory of mental health. This is one of the most intense songs on the album but somehow retains a lot of melody as well as having another super catchy chorus. The Tibby Tan Tiger was a surprising song. It's much poppier than anything else on the album and comes as a welcome break from the intensity. I never ever expected to find a song like this from this group of musicians and I'm really impressed by the versatility displayed. The track is about calling people out for their bad behaviour and making sure they know there's no place for their particular beliefs around here. The sixth song is titled Working Class Tories. Here's one of the more political songs on the album and is a reaction to the sad way that working class people voted for a political party that doesn't care about them in the most recent UK elections. The lyric that really stands out throughout is "the downside of all of this, is that you dismissed, the chance to make your lives better." I couldn't agree more and share the band’s frustration with the population of the UK.

The second half of the album is kicked off with The 1%. The initial thing I noticed when listening to the track for the first time was the ominous sound the bass makes at the beginning of the track. This really made me feel like Knife Club were about to get really serious. This is by far the angriest song on the album as Andy and Zoë scream about how furious it makes them that the people with all the money don't contribute as much as they could do and how selfish they are. Definitely a topic that should make anyone really angry. The eighth song is titled I Mean, I'd Probably Take An Adidas Endorsement. This is a song that is about DIY punk ethics and encourages the listener to get involved in the movement. The more people involved in the scene then the stronger it is. Killing Two Birds With Two Stones is up next. This is a song about struggling with indecision and feeling pressured by people to make the right choice. There's more than likely no way to please everyone and that can really tip people over the edge. I'm not sure I've ever heard a song that tackles this subject before and it feels like a refreshing topic for Knife Club to look at.

Do You Want A Knife With That Salad? is about feeling worn down by the world and trying to eventually put yourself back together after being at your lowest. This is a straight forward punk rock song and is similar in sound to the UK scene from the 70/80s. It's quite a throwback but has a subject matter that is really relatable to the modern day. The penultimate song is 27% Of Statistics. The track is relentless as Zoë and Andy barely pause throughout, singing about simply not wanting to be a statistic. It's another song that quickly finds a home in your mind and you'll be singing along to the chorus immediately whilst also feeling like you want to be in an crazy mosh pit. TNSClub7 completes We Are Knife Club. This gives the album a nice rowdy finish with a big gang vocal section throughout the majority of the song. I love the feeling of inclusion that the song gives out. The track is about always having the best intentions even when things go horribly wrong. The titled suggests they are talking in particular about TNSRecords (whom all the band members had a relationship with before Knife Club) but I feel like the message can be taken to everyday life. Such a positive way to end the album.

With the collection of people and talent involved in this album, it's no surprise that it's really good. Even if the harder and thrashier side of punk rock isn't really your pint of Pepsi, I would still suggest you listen to We Are Knife Club. Hopefully we'll be able to see them live as soon as is safe, as I feel like these songs will be even better live.

Stream and download We Are Knife Club on Bandcamp here.

This review was written by Colin Clark.
Posted by ColinsPRW at 12:20:00