I may have mentioned a few times previously about my love of German punk rock on CPRW. There are so many great bands releasing fantastic music. At the end of April, Cologne’s The Sewer Rats released their new album Magic Summer on Uncle M, Monster Zero Records and Disconnect Disconnect Records. I first became aware of The Sewer Rats thanks to last year’s Hamburg Booze Cruise Festival and have been enjoying listening to their previous album Heartbreaks & Milkshakes ever since. When Magic Summer was released I couldn’t wait to hear it. 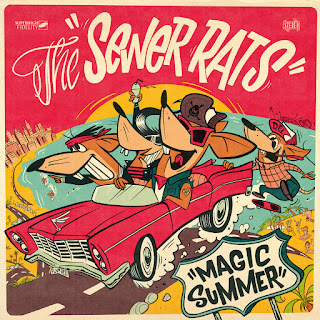 Magic Summer begins with the song chosen to be the lead single for the album, Rejuvenate. Rejuvenate is a song about going back to the things that you loved in your youth when things as an adult become too hard. It’s a fun and positive way to begin the album and also a great way to introduce new listeners to The Sewer Rats – melodic pop punk that’s wonderfully catchy and a lot of fun. Up next is I’m Quitting My Job. It’s pretty self explanatory what the song is about so I won’t patronise you with an explanation. The song is brilliantly simple and super accessible for everyone. It’s relatable for anyone who is in a job they don’t like and singing along with people who feel the same will be really cathartic. I Don’t Wanna Go To The Dentist No More is a less upbeat song about the fear that lead singer Chris Gin has about going to the dentist. This fear is something a lot of us go through but I don’t think I’ve ever known a band to write a song about it so lots of points for originality here. This is followed up by I Don’t Wanna Go To The Shrink No More. Any guesses on what this song is about? Lyrically it’s pretty minimalist but you get the point on what it’s about. Much like I’m Quitting My Job, there’s a cathartic feel to the song as you sing along to the track.

The fifth song is title My Sweet Chun-Li. This track is about Gin’s love for the legendary Street Fighter character Chun-Li. It’s a super sweet love song for a fictional character that does show a softer side of The Sewer Rats. It’s all a bit silly but it did make me smile a lot. Nasty Cut brings the tempo of the album back up. It’s a fast and punchy song about a barbershop in Düsseldorf. Definitely the first time I’ve ever heard a song about a barbershop. I like to think the band wrote this song to ensure they get free haircuts for life at Nasty Cut. The seventh track it titled My Baby Is At Groezrock (And I Am Not). It’s about Gin’s jealousy about his girlfriend being at Groezrock Festival without him and the range of feelings and emotions that go through his mind during the weekend. It’s all a little tongue in cheek but again something I’m sure we’ve all related to in one way or another at some point in our lives. The chorus in particular is crying out for a big sing-along with The Sewer Rats in a sweaty basement somewhere. This is The Sewer Rats at their best. I literally have no idea what Total Creep is about but it’s, again, a massively fun sing-along. Something about creeps, green skin and aliens that had me grinning from ear to ear.

Choice is probably the most serious and passionate song on Magic Summer. It’s about the positives of following a vegan diet. Not just for animal rights reason but for the good of our planet. What I really like about the song is how The Sewer Rats don’t come across as preachy but instead encourage the listener to make the right decision. I Don’t Wanna Leave My Room No More is another song that’s pretty self explanatory. This is one of the sadder songs on the album, particularly on the verse but does a wonderful job in building towards a big chorus. The harmonies that finish the track are a thing of beauty. The penultimate track is Down For Life. This song is about being a punk for life and being so proud of that even if people look down on your lifestyle choice. For some people, there is a belief that being an adult means not doing the things you loved as a kid and that’s not the case at all. You can be a grown up and still love the things you loved when you were younger. This song could become a bit of an anthem amongst the punks, many of whom will relate in a big way. I know I do. The album is finished with its title track, Magic Summer. This is another of the album’s slower songs where the band reminisce about the good old days of their youth and wish they could return to it. We all remember those great summers that were non-stop fun before adulthood and responsibilities got in the way. This is a fantastic chilled out way to finish the album. I’d love to hear an acoustic version of this song at some point in the future.

Magic Summer was one of my most anticipated albums of 2020 and it most definitely didn’t disappoint. As the title might suggest, it’s an album for the summer – for singing along with your friends on a warm night. It’s such a shame everything got cancelled this year as I was really looking forward to seeing The Sewer Rats at festivals all around Europe and singing along with the band.

This review was written by Colin Clark.
Posted by ColinsPRW at 11:51:00