I must admit that when a band decides to release a new album for the first time in a long time I’m always a bit sceptical. In my experience, they might turn out to be good but they never hold a candle to their earlier material. When long running Detroit ska punk act The Suicide Machines announced they would be releasing their first album in fifteen years on Fat Wreck Chords this year my sceptical nature returned. Then I heard the first single from Revolution Spring, titled Awkward Always, and I became very excited for this record. It did not disappoint and has been on constant rotation at CPRW towers ever since. Frankly, it’s taken me way too long to get round to reviewing this album but here it is. 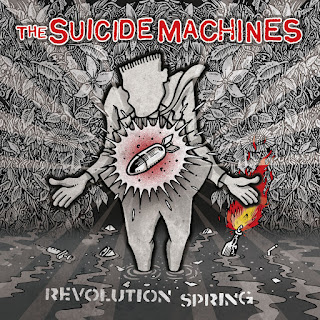 Revolution Spring opens with Bully In Blue. Unsurprisingly, The Suicide Machines kick things off in a hard hitting way with this song about racism throughout the police force. The song starts the album off in an energetic fashion with some of Rich Tschirhart’s bass lines really stealing the show. I was also immediately reminded how much I love Jason Navarro’s vocals – in my opinion it’s one of the most underrated vocals in punk rock. Up next is the brilliant first single Awkward Always. This is a more ska sounding song about feeling like you never fit in as a child and continuing to have that feeling through your adulthood. In the punk and ska scene, I imagine this song hits a chord with a lot of people so it was a great choice as a lead single. It’s also a lot of fun to skank and dance along to and the refrain with the great gang vocals will bring a crowd together. Babylon Of Ours looks at the subject of politicians profiteering on war and using the media to divide the people rather than trying to unite them. Musically it’s mostly played at a steady beat, allowing the message of the song to really stand out. The use of the keyboard throughout the song adds a great extra element without taking anything away from the song. The fourth song is titled Flint Hostage Crisis. This shows off the heavier side of The Suicide Machines sound. Navarro adds a little spite and anger to the way in which he delivers his vocal on the track. It’s about the people who have to live in poverty-like conditions in a nation as rich as the United States because the rich only look after themselves. The fact that this kind of thing is happening is really sad and I’m glad The Suicide Machines chose to put some light on this topic as I’m sure there are plenty of people unaware it’s even happening.

To Play Caesar (Is To Be Stabbed To Death) sees the band go back to more an uptempo ska sound that you can dance along with. Despite the fun nature of the song, it again carries quite a serious message about how people seem to pick pointless battles with each other rather than uniting against the people who really oppress them. Trapped In A Bomb is one of Revolution Spring’s sadder tracks. Because of this, the ska sound is taken out and we’re treated to a mid-tempo punk rock song instead. It’s a track dedicated to a lost friend, speaking of missing them and dealing with the grief that the death has caused. It’s interesting to hear this softer side of The Suicide Machine as it’s not something they’ve often displayed during their long career. The tempo is brought right back up on track seven – Detroit Is The New Miami. This is a fast paced hardcore track about how the Earth is in big danger and people are still denying that anything is wrong and are more interesting in making money than preserving our futures. There’s no surprise that the band went hardcore on this song as they are rightfully furious that this is being allowed to happen. Eternal Contrarian brings us to the halfway point of Revolution Spring. On this song, Navarro sings about constantly pushing in a different direction to someone and the problems it creates. Sticking with a straight forward punk sound, this is another of the softer Suicide Machines tracks. I love the variation that the first half of the record brought.

Well Whiskey Wishes is half a fast paced pop punk track and half a slow paced ska reggae song. I was kind of reminded of Rehasher during the speedier section which perhaps isn’t too surprising given that Roger Lima co-produced the album with the band. This track looks at what happens when you deal with having a bad day by drinking whiskey. The contrast in the two halves of the song is a delight and the subtle brass lines really add a lot to the song. Black Tar Halo sees the band hit top speed. It’s impressive how we can hit track ten and the band are still finding ways to grab your attention and still make you want more and more. This is another sad song about someone with a drug addiction and how they look to take advantage of people to get their next fix. Empty Time is almost a modern take on a more traditional two tone sound and I’m really into it. It’s about looking back at your past and thinking about the things you’ve done, before ultimately deciding to just move on. The opening guitar riff of Impossible Possibilities had me ready for a big party song. It’s a positive song about unity and thinking about what we can achieve if we found a way to work together. This kind of message was something that Revolution Spring has been missing up until this point. It warmed my heart to hear a song like this and it does give me hope that things can get better. The chorus was fantastic – “can you imagine what this could become, with hope and love and a little communication, can you imagine what this could become, with unity, fire and inspiration.”

Potter’s Song is a complete re-working of the Break Anchor song Defiant Culture. If you don’t know who Break Anchor are then they are another Detroit punk rock band who have ties with The Suicide Machines. They’ve taken the original, which is more of a heavy hitting street punk song, and given it more of a ska punk treatment which I honestly feel has improved the song. It’s about that punk rock staple of fighting the man and taking back what you think is yours. Simple adds some more positivity to the end portion of Revolution Spring. It’s a summery ska punk track that encourages the listener not to put up walls and how things aren’t always as bad as you think. The track is full of advice that will hopefully inspire anyone listening who is becoming closed off and even depressed. I’m a big fan of bands using their platform to try and help people and make them feel better. The penultimate song is named Anarchist Wedding. This shorter song is another about fighting the government. It’s one of the catchiest tracks on the album and you’ll be singing along with fists high in the air in no time. I always think that the best political songs are the ones that are simplest to sing-along to as they will unify and rally people together. If a political song is really wordy and complicated, it won’t have anywhere near the same effect as a simple one. Revolution Spring finishes with what is perhaps my favourite song on the album and what is definitely the cheesiest. This is The Suicide Machines version of a barroom sing-along and ensures that the album is completed in positive fashion. Titled Cheers To Ya, it’s about looking at the mistakes you’ve made in the past and learning from them to become a better person. The really long outro has me aching to see them live whenever they manage to make it back to the UK. Singing along to that moment in particular will be quite the highlight.

The Suicide Machines really did a fantastic job on this album. Normally I’d steer well clear of reviewing a sixteen track album but I couldn’t not review Revolution Spring as it’s so good. I feel like if you’re new to The Suicide Machines then this is a great place to start with them, before going back on their fantastic back catalogue. If you were already familiar with them then Revolution Spring is a brilliant addition to their discography.

This review was written by Colin Clark.
Posted by ColinsPRW at 17:12:00