Has there ever actually been a punk supergroup that's any good? The Falcon? More miss than hit most would say. Me First And The Gimme Gimmes? Fun, but ultimately a gimmick that's been taken too far, I reckon. Any band Mikey Erg ever plays in? Well, I love all of these, but I don't think any of these bands would quite be classed as a 'supergroup'.

And how do you actually define a 'supergroup'? There are greats, formed by people from seminal bands – Fugazi (Minor Threat), Rancid (Operation Ivy), Off! (Circle Jerks et al) – but the key thing here is that these bands had all split before the new ones took off. They were also formed years, sometimes decades, ago. Even if you try and argue these are supergroups (which they're not, by the way), we've been waiting a helluva long time for a new one that's actually any good.

So if we're being honest, I'd probably say no, we've never actually had a legit punk supergroup, which makes it all the more surprising that I found myself ordering the new Fake Names album (but that's bored, lockdown, internet shopping for you). Made up of Brian Baker (genuine legend from Minor Threat, Dag Nasty, Bad Religion and others), Michael Hampton (Embrace and State of Alert), Denis Lyxzen (Refused) and Johnny Temple (Girls Against Boys), Fake Names are the latest punks to give it a go with their self-titled debut LP released, unsurprisingly, on Epitaph earlier this year. 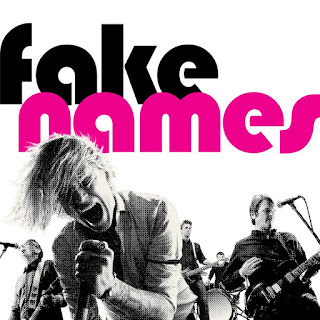 The album has 10 songs and comes in at under 30 mins – standard stuff for a punk album. It's not particularly gritty punk though. As a collection of songs, the album sounds a little too polished. Maybe that's just because these guys are such accomplished musicians that have been in the game for so long and presumably are consummate professionals? I can imagine them recording this in a fantastically equipped studio with everything at their disposal. If that's all the case, then I guess there was very little they could have done to have drummed those instincts out of themselves, but, for me, it means the sound isn't quite raw enough for my ear.

The album kicks of with All For Sale. It's a decent mid tempo song, with a typically old school punk theme of how terrible capitalism is and how we all get screwed by the system. I like it, but it doesn't have that smack-me-in-the-face, sit up and take note element to it.

There are some strong tracks. There's plenty of melody and singalong harmonies on the record. I really love the songs Brick and Being Them, probably because they're fast and Brick, in particular, sounds Dag Nasty-like. The obvious standout track is First Everlasting, which is a really hooky, bouncing, singalong song punctuated with a whoa-cry. But there's also a couple of lesser and slower songs that are just quite average. It's not quite formulaic, stadium rock, but some of it is not far off.

As I'm listening to this, I can't help but being reminded of the book and documentary The Other F Word and specifically the bit where Jim Lindberg of Pennywise is dying his beard because he doesn't want the 'kids' to realise how old he is, going through the motions. Somehow, I don't actually think these guys are the same. I think they're doing it because they enjoy it and they're not bothered by what the 'kids' think. Indeed, there's no real hiding how 'experienced' they are. If that all means a sound that's very cohesive and that fits together well, then I bet that's the sound that they were going for.

I actually like Fake Names more than Beach Rats – Brian Baker's 'other' recent supergroup that didn't seem to go anywhere after releasing a single a couple of years ago – and that surprises me given the Bouncing Souls and Lifetime connections in Beach Rats. On paper, I would have me down to be drawn more towards Beach Rats, so I guess that's one small victory for Fake Names, and I'm sure that there will be people that love this band in the same way there are people that love Bad Religion or Minor Threat or Refused. However, for me, as someone that likes those other bands rather than someone that loves them, I'm gonna put Fake Names in the same bracket. I like this album, but I'm never going to love it.

This review was written by Chris Bishton.
Posted by ColinsPRW at 17:23:00