Hell’s Ditch are somewhat of a UK DIY punk supergroup. Featuring previous members of River Jumpers, Chief, Bad Ideas, Dearest, Maycomb and Knock Out Kaine, the five piece have come together to release the Vacant Hearts 7”. Released by Disconnect Disconnect Records, Bypolar Records and Rosecoloured Records, Vacant Hearts was supposed to be the first step of a very busy year for Hell’s Ditch until the world fell over. Thankfully they were able to get these songs out into the world and what a couple of great songs they are. 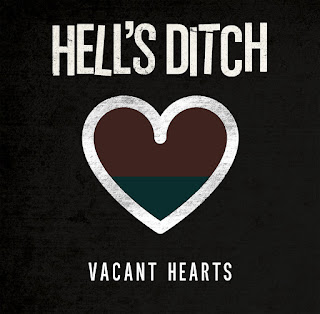 The first of the two tracks on the Vacant Hearts 7” is its title track. Perhaps a little unsurprisingly, the first thing I thought when I heard the song was how nice it was to hear former River Jumpers vocalist Nick Davis’s voice again. One of my favourite vocalists in the DIY scene. If you were a fan of River Jumpers then you’ll perhaps know what to expect here – melodic pop punk music with an edge and plenty of great hooks. The song is about feeling dead inside and wanting to change that. The chorus is catchy enough that you’ll be singing along with the band and if it’s a topic you can relate to then you’ll certainly feel better screaming your lungs out to the song. A great positive introduction to Hell’s Ditch.

The other song on the 7” in titled Hope Is Hope. This is another song that bleeds positivity. It’s about holding on to hope when all feels lost. On this track, Hell’s Ditch show what fantastic lyricists they are. Perfectly crafting imagery within the lyrics, so much so you can almost imagine the characters involved in the story and envision the music video in your head. The production (by the legendary Mass Giorgini) is perfect. You can hear each instrument so well and can pick out all the subtle layers that each member of the band brings to the track. As you might expect, the song peaks at the chorus. The band do a great job building things up and getting you pumped for it to hit before you lose your voice shouting along.

This is a perfect introduction to Hell’s Ditch. You wouldn’t expect anything but quality from these guys and they definitely don’t disappoint. Hopefully, when the world is up and running again, the band can reschedule all of their cancelled shows and maybe even get some more music out. Two songs isn’t enough.