Album Review: The First One by Andy B & The World

Four years ago, former Fandangle, New Riot and Mr Zippy bassist Andy B set out on an ambitious project to write and record an album featuring musician friends, old and new, from all over the world. The project saw Andy travel all around the world to record the different parts for the album and eventually ended up featuring members from bands such as Reel Big Fish, Less Than Jake, RX Bandits, The Slackers, [Spunge], Death By Stereo, The JB Conspiracy, Random Hand, Lead Shot Hazard and many, many, many more! In total there are one hundred and seventy two people on this release. The album is titled The First One (suggesting that Andy is mad and is going to do this again!) and will be released on Pookout Records. Pook also appears on the album. The First One is also raising money for Centre Point and Music For All. The thought of reviewing such a big project is pretty daunting but, given the effort that’s gone in to putting this together, I feel like the world needs to hear about it. 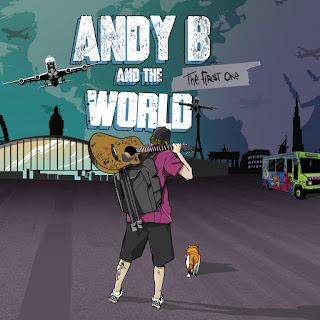 The album begins with Black & Blue. Unsurprisingly, given the talent featured on the album, this is a pop fuelled ska punk. It’s a great choice to start the album as it’s full of energy and bursting with positivity. It’s about coming together and ignoring all of our differences to fight for a bigger and better change. The song really shows the amount of people who have appeared on the album, the gang vocals sounds absolutely massive and I love them. Up next is Something’s Out. The song starts out acoustically before some horns come in and helps build towards the vocals. After the full on celebration sound of Black & Blue, Something’s Out pulls things back for a song about struggling with your mental health, in particular anxiety. I loved that Andy placed a song like this so early on in the album. Sure the album should be a celebration of unity but it’s also important for messages such as this to be prevalent. I really enjoyed the horns on the track; those short blasts really give the song an urgency that pulled me in. On my first listen through of the album the third song, Protestin’, really stood out. Lead by Cara-Jane Murphy, the song is a political song about the importance of protesting. The song borders on gypsy punk but maintains a ska element. If you were expecting a full on third wave ska album from start to finish here then you’re in for a shock. The use of the gang vocals in the call and response section of the track is genius, giving you the feeling of being at a protest. Fantastic work. The track also features the tenor saxophone playing skills of Dave Hillyard of The Slackers which is pretty cool. Frantic starts out with some horns from Jeremy from Skatune Network and Matt Appleton of Reel Big Fish among others. The list of people on this album really is ridiculous. Ben Hayes and Matt Carson’s vocals sound great on the track. The higher pitch gives it a unique feel that really pulls you into the song. This song certainly reverts back towards the third wave sound but also features some of the most impressive musicianship on the entire album (which really is saying something!), there are some moments throughout the track where Jon Priestley’s guitar really shreds.

Won’t Back Down features a familiar vocal in the form of Karen Roberts, formerly of Chase Long Beach. There’s a band I haven’t thought of in a long time! There’s a fun swing vibe to the song that will get you moving and Karen’s vocals sound as good as ever. The song is another political one about continuing to fight for what you believe in no matter what obstacles stand in your way. Times sees Al Copeland of [Spunge] fame take the lead vocals. As a big fan of [Spunge] this was very exciting for me. This is a bouncy ska punk number than will get you singing along and dancing (in true [Spunge] style). This song feels like a massive party number where you’ll have your arms around a stranger, singing along with joy in your heart. The track is about having a big night out, the self destructive behaviour that comes out and wondering where you should draw the line. The seventh song Don’t Look Back sees a bit of a Fandangle reunion as Andy is joined by former bandmates Tommy Saunders on lead vocals and Ed Starnes on trumpet for the song. It also features Roger Lima of Less Than Jake and MC Lars on the song. And it also features Chloe from Catch-It Kebabs, Tom and Evelyn Crabb of Lead Shot Hazard, Rob of Darko/Lockjaw Records and the previously mentioned Pook among loads of other people in the song. Imagine if Andy could somehow organise all these people to perform live one day, that would be something! The song is about the beauty of friendship and having people who will be there for you whatever happens.

The second half of the album starts with Not Gonna Settle. Jennifer Morrison of Tef London takes lead vocals on this track. It’s a stripped back acoustic ska song that is full of summer vibes. The track is an upbeat and positive song about knowing your worth and striving for the best of everything. This song is full of empowerment and works perfectly in the context of what the entire album is about. The ninth song is titled Follow The Streetlights and features the impressive vocal talents of Tony DiCarluccio of The Main Street Sweep. This track is a modern take on a more traditional ska and two tone style. The song really explodes during the chorus and I would imagine it would sound incredible sung in a big hall. The horns (there are thirteen horn players on this song) add so much bounce and energy to the song and the organ (played by Andy B) gives life to the verses. The punk in ska punk is well and truly brought back in No Righteous Cause. The song starts out with some simple guitar chords that give the song a darker edge before a huge drum roll comes in and the song bursts with energy. The guitars become faster and soon are joined by a catchy horn riff. By the time the vocals come in you know it’s time to party. Billy Canino’s vocals were higher than I was expecting after the intro but they do give the song a different sound. Something great about this is how they make you listen to every word. Advertise This must win the award for the most amount of people on a stripped back acoustic song ever. Richard Narbett is in charge of lead vocals here and gives the song a very accessible pop sound. It’s a catchy song about how people can be affected by the way advertising and the media make you feel about the way you look and how you’re doing in life. How they paint a picture of what is perfect and the mental health issues this can cause people. It’s important for people to remember that there is no such thing as perfect and everyone has flaws. The gang vocals on the final chorus present a great coming together of people and let the listener know they’re not alone.

Change The World is a stand out track on the album for me. Captain Accident takes the lead so you know it’s going to be a reggae driven number. There are also elements of world music that sneak in that work really well within the song. As the song progresses, the band take you massively by surprise as the track changes gears dramatically. It switches from soulful reggae to skate punk and I guarantee nobody listening heard it coming. I absolutely loved it. I guess with this many people working on the album it inspires so much more creativity and possibility. Change The World is about exactly what you would expect – changing the world. It’s a positive song about protesting and fighting for what you believe in. How the song goes from peaceful to urgent is just amazing. The penultimate song on The First One is titled Things Change. Andy B released a fantastic video for this song in the run up to the album's release. This is a full on folk song that is again brimming with positivity. It’s about coming together to try and make changes for the better. There’s a couple of songs that cover this subject on the album and I’m all for that. It’s important for people to know that they can make a change in the world. The gang vocals are the big highlight, with a huge choir of people coming together to sing out the song's important message. The final song, Eleventh Hour, shows off another different style. It starts off with an electric horn melody which was written by Pook before a gentleman by the name of Jake “Project” Brimble begins rapping over the music. Being this far into the album and it still managing to sound different and unique is impressive but I guess not that surprising given just how many people are involved in this album. Combining hop hop and ska punk music always seems to work really well, I'm not sure why there aren’t more bands doing it at the moment. There’s so much energy here that it’s difficult to stay still whilst listening to the song.

The First One is an incredible achievement. The time and effort it must have taken Andy to put all of this together doesn’t bear thinking about. Each song is brilliantly unique but they manage to all tie together and feel a part of the album rather than the album feeling like a collection of songs with no connection. Even if ska punk isn’t your thing, I encourage you to give The First One a chance just because of the sheer size of this project and that it was all done for two very worthwhile charities.
Stream and download The First One on Bandcamp here.
Like Andy B & The World on Facebook here.
This review was written by Colin Clark.
Posted by ColinsPRW at 12:41:00