Surely by now you’ve noticed the massive resurgence in American ska punk that’s been happening over the past couple of years. Bad Time Records, the California-based label, have been at the forefront of this movement. In December they put out their latest release which was the self-titled debut from New Orleans group Bad Operation. The album, which was co-released by Community Records, had a lot of hype behind it before it was released and has earned rave reviews since. It’s now time for my rave review. 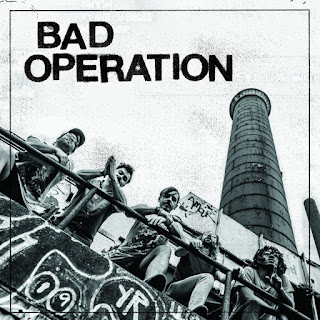 The album begins with the song Perilous. This is a great introduction to Bad Operation’s new tone style of ska music. They take that two tone style made famous by bands such as The Specials and The Selecter and give it a fresh coat of paint. The song starts out in an upbeat fashion which really caught my interest immediately. The first time you hear Dominic Minix’s vocals is a special moment – they are super soulful and impossible to ignore as Dominic sings about finding solace in music when your mental health is giving you problems. Next is Bagel Rocks which starts out with some marvellous keyboard playing from Daniel “D-Ray” Ray. With its simple but catchy “oh oh oh oh oh oh, oh oh oh oh oh oh” chorus I can see this being a real crowd pleaser when they play it live. It’s about trying to learn from your mistakes and growing as a person, something we all could try and do. It’s crazy how a song with that chorus can be so deep but Bad Operation pull it off brilliantly. The opening guitars on Brain give me great Operation Ivy feelings. This is the shortest song on the album and also the most up tempo. The band squeeze a lot into these two minutes. The up tempo style obviously means this is a high energy song. Minix shows great vocal skill in getting all the words out and them still remaining as soulful as they do on the slower songs. The track is about searching for meaning in your world and realising that your life doesn’t need to go the way that society says is the conventional route.

The fourth song is titled Little Man. After the energetic Brain, Little Man sees Bad Operation switch to a slower, reggae style and prove that they’re just as adept at this style. There’s such a nice, chilled out vibe coming from the song, you can just lay back, listen and smile along with it. Listening to the lyrics, it’s obviously a deep track about those people who can’t get on with other people and can’t understand that people are all different and that’s perfectly fine. It’s mad that in 2020/21 this song feels as important as ever. It’s sad that a lot of people still aren’t evolved enough to realise that people don’t have to be cookie cutter. Next is the album’s title track BAD OPERATION. Just to be confusing, the band, the album and the track is named Bad Operation. The song starts in a haunting and atmospheric way that gradually builds towards a mid-tempo ska song. I love the way in which Minix’s vocals are delivered. They seem deeper and more serious, brilliantly contrasting with the bouncy music that’s accompanying them. The track is about people who ignore all of the wrongdoing and struggles that go on around them rather than trying to help and be the solution. I feel like when Bad Operation play live again (or for the first time?), the next song will be their set opener. Titled Kinda Together, it serves as a introduction to what to expect from them musically and thematically as well as introducing you to the band. It will get your feet tapping immediately. The seventh track is Peachy. The song tackles the subject of mental health, in particular the feeling of wanting to stay at home but also not wanting to be by yourself. It’s a difficult scenario to find yourself in. The song is a reasonably simple one that anyone listening will pick up quickly, this will encourage great sing-alongs and hopefully a feeling of catharsis for anyone who is feeling the same.

After a small sample of The Specials classic Ghost Town, Siren’s Call has a quiet bass lead introduction. Soon some simple guitar chords and the vocals come in. Because of the quiet nature of the opening, when the vocals do start they are striking. Your ears prick to attention. The track is about suffering from anxiety and how worry and stress can affect your attempts to live a healthy lifestyle. The penultimate song is titled Baby In Arms. Minix’s vocals are so interesting on this track. They have a haunting wailing quality that sends shivers along my spine. Minix has such a versatile vocal ability. Baby In Arms is about looking for a positive and believing that something is good is on the horizon. In a world that seems to be more doom and gloom than ever it is important to find positive things to hold on to that will keep you sane. There’s a great spoken word moment during the track that really stands out as something unique. The final song on Bad Operation is Fish Out Of Water. This is a bombastic way to finish the album, opening with a short trombone solo before some pounding drums join and the song starts proper. The song is heavy on the trombone which gives it a playful sound. The track is also full of “whoa-oh” gang vocals that give the song such a big sound. The track talks about the stress of trying to have everything and how bad that can be for you mentally before eventually realising that you can be happier with less. This is such an important message for people and a really positive way to finish the album.

Bad Operation deserves all the hype that surrounded this release and much, much more. It’s phenomenal. In my opinion, it doesn’t deserve to be spoken highly of in just the punk/ska/alternative press but in the mainstream press as well. Musically it’s incredible and the themes touched on throughout the album are more important than ever. This is vital listening. It’s also a lot of fun. I hope I get the chance to see Bad Operation at some point. As good as these songs are on recording; they can only be better at a live setting.
Stream and download Bad Operation on Bandcamp here.
Like Bad Operation on Facebook here.
This review was written by Colin Clark.
Posted by ColinsPRW at 12:24:00