Beach Bunny are an emotional indie rock meets power pop band from Chicago, Illinois, who, until coming to write this review, I didn’t realise were quite as ‘big’ as they are – they have their own Wikipedia page and over 3 million monthly listeners on Spotify! The band started out as the bedroom-based solo project of Lili Trifilio in 2015 and, after releasing a number of solo EPs, the band expanded to a four-piece. In February 2020 – on Valentine’s Day no less – the band released their debut album on Mom + Pop Music, Honeymoon, which was highly rated not just in indie rock circles. It was not long after this that I discovered the band and Honeymoon was on regular rotation for me throughout the Spring last year.

At the beginning of this year, 15th January to be precise, the band released a new four-track EP titled Blame Game. I must have missed the initial release of the EP as it’s now early February (at the time of writing this) and I’ve only just checked it out thanks to one of the songs popping up on my Spotify Release Radar but I am absolutely loving these four new songs. 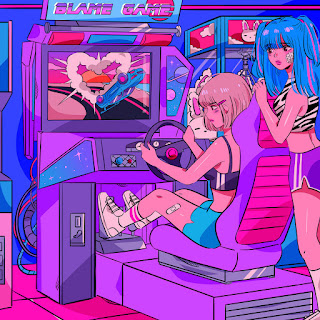 First up on Blame Game is Good Girls (Don’t Get Used). Lili’s vocals take centre stage right away with the rhyme of ‘Say you miss me, Say you wanna kiss me’ immediately grabbing the listener’s attention. It’s a catchy tune from the outset and is oozing in feel-good vibes as Lili sings of being fed up of being messed around by a guy and saying that enough is enough. Rather than being a woe-is-me tale of heartbreak – something that I feel a lot of the tracks on Honeymoon could be described as – this is an empowering anthem that declares ‘I don’t need people like you in my life and I’m going to be just fine without you’. Love Sick is the name of the second track on Blame Game and it opens with a brilliantly infectious indie-style guitar riff that instantly has me grooving in my seat. You might think from the title of the song that Love Sick is about pining over someone but it’s actually more about being sick of love and the pressures to be ‘in love’ for a young twenty something year old woman – ‘Sick of love, I’m tired of the bullshit, Fed up with subtracting names, Need someone that isn’t an equation, Only adding up to pain.’

There’s a feeling of bitterness seething underneath the opening lines of third track, Nice Guys. After starting out fairly slowly and stripped back for the first few lines of the song, it’s not long before some crunchy guitars and pounding drums come in and build up to a hard-hitting chorus. Lili displays some of her finest lyrical work thus far with ‘I’m sick of nice guys, I want someone who actually wears hearts inside their eyes, And isn’t only interеsted in what's between my thighs, You win me likе a trophy, not a consolation prize.’ The track is a fuck you to so-called ‘nice guys’ who are far from as genuine as they seem. Bringing the EP to a close is its powerful title track, Blame Game. Musically it’s a fairly slow-paced and pleasantly melodic tune but it was the lyrics of the track that really made me stop what I was doing and pay attention when I first heard this song. Blame Game is about how people often try to justify sexual assault by saying things like ‘they were asking for it’ because of how they were dressed. The ‘blame’ is shifted to the person who has been assaulted rather than the actual abuser – ‘Guess it’s my fault my body’s fun to stare at, Sorry my clothes can’t keep your hands from grabbing, Yeah, it’s my problem, I’m asking for it, Guess you’re the victim and I’m the suspect’. It’s crazy that in 2021 this is still a problem and songs like this are needed. As Lili says, we should ‘Teach them why they shouldn’t do this, Instead of telling us [women] to hide.’

Although I enjoyed Honeymoon a lot at the time, this feels like a leap forward in terms of Lili Trifilio’s songwriting, as well as the subject matter she’s writing about. The songs feel more mature and, I guess being a good few years older than her myself, I feel like I can relate to these songs more so than the band’s previous material. With Blame Game, I feel like Beach Bunny have gone from adolescent heartache and superficial insecurities to really taking charge of their identity. These songs are passionately defiant and are the perfect combination of catchy indie punk melodies and lyrics with plenty of bite. If this EP is anything to go by, the next full-length Beach Bunny record is really going to pack a punch and I cannot wait to hear it.