The Cereal Killers are a new pop punk band out of New Jersey. I was lucky enough to discover them thanks to the Punk Rock Radar Instagram account – if you’re passionate about finding great new punk bands then I seriously suggest following them. In January, the four piece band released their debut EP titled Force Feeding Unhealthy Cereal Knowledge. From that title and looking at the artwork for the EP, which features the four members of the band dressed as a Dracula, a rabbit, a tiger and a frog forcing cereal upon a tied up child, it’s obvious they are a band that doesn’t take themselves too seriously. Another clue on that is that they’re called The Cereal Killers. The EP features six songs that put a big smile on my face. 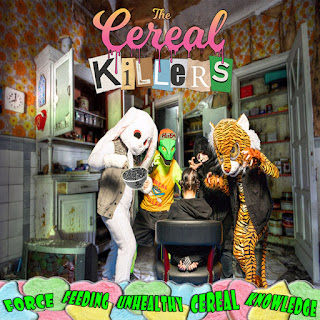 The EP begins with Magically Delicious. The track starts out with an audio clip of a bowl of cereal being made before it jumps into a drum roll and some guitars. Soon enough the vocals come in and we’re treated to a melodic pop punk song about the band’s love of Lucky Charms cereal despite knowing how bad they can be for you. It’s a mid-tempo song with a catchy melody that will certainly get you tapping your toes. Next is Hey Mikey Likes It which sees The Cereal Killers play a ska style. I was not expecting this but I really enjoyed it. This sound doesn’t hang around for long as the band soon hit the chorus where they revert back to a pop punk sound. The song is about a cereal named Life (something we don’t have in the UK) and the bands love for its simplicity. During the pop choruses I’m really reminded of the song Life, Hey Mikey by the McRackins. Batman Bank starts out with a much higher tempo than the previous two tracks giving the EP an injection of energy. On this track, the band talk about classic Batman cereal and bemoan the fact that they kept making Batman sequels but stopped making the cereal. It’s hilarious how passionate the band are on this subject.

The second half of the EP begins with Perfect Saturday. The track has a quiet and slow build that eases you into the song. As it progresses, the track does get more expansive without really hitting any massive highs. The song’s lyrics are the real highlight. They paint a perfect picture of a dream Saturday, eating cereal, watching cartoons and playing Nintendo. Sounds like a top quality day to me! The penultimate song is titled Silly Rabbit. My immediate thought on the song was that it has a darker tone than anything previously on the EP. The track has a couple of really interesting and catchy guitar riffs that really stand out, giving the song a really serious feel. Obviously, it’s not serious at all, it’s about cereal. Last up is Young Frankenberry. Things get heavy here – heavy for The Cereal Killers anyway. Sonically there is a hardcore vibe but the song manages to keep a great melody throughout. I’m probably going to get slated for this but it actually reminds me slightly of very early AFI and I love it. We don’t have Frankenberry cereal in the UK but after a little research I discovered that it is only sold in America around Halloween and the song is about how the cereal mixes four different flavours together to create something else. Frankenberry – Frankenstein, I get it!

Obviously this is an EP to take deadly seriously and to live your life by all the messages that spill out of it. Force Feeding Unhealthy Cereal Knowledge really made me jealous of all the different types of cereal that they have in America. We’re missing out on a lot of sugary goodness over here in the UK!
Stream and download Force Feeding Unhealthy Cereal Knowledge on Bandcamp here.
Like The Cereal Killers on Facebook here.
This review was written by Colin Clark.
Posted by ColinsPRW at 13:21:00