I’ve recently been listening to Beach Bunny’s latest EP, Blame Game, a lot (I recently reviewed it as well if you want to check that out) and it was through Beach Bunny that stumbled across fellow Chicago-based band Hospital Bracelet. Hospital Bracelet are a three-piece emo band consisting of Eric Christopher on lead vocals and guitar, Arya Woody on bass and Manae Hammond on drums and I was blown away by their latest release. South Loop Summer is the band’s debut album and it was released by Counter Intuitive Records on 17th January. Here’s what I have to say about it… 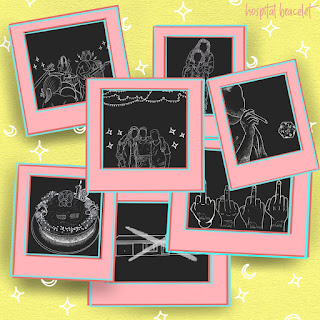 The first of seven tracks on the album is its title track, South Loop Summer. Opening with a melodic and slightly fuzzy guitar riff, this first song serves not only as a great introduction to the record but also an introduction to Hospital Bracelet’s own brand of emotional pop punk. The track is about feeling stuck in your life, missing your friends who are miles away and simply wanting to be anywhere else but where you are right now – ‘Why are all my friends in Ohio? I’m 6 hours away from everywhere, I wish I could be, I can’t keep telling myself to be a better version of me’. There’s a bitterness in Eric’s vocals that really shows the frustration with their situation. Sober Haha Jk Unless is up next and here Hospital Bracelet take their emotion on display to another level. It’s a quieter sounding song and there is a real sense of fragility in Eric’s vocals that manages to be both soft and powerful at the same time as they sing about battling with sobriety. The songwriting and delivery of the vocals do an incredible job of making you realise just how difficult giving up alcohol (and other substances) can be.

Kicking things off with a bold, reverberating emo-style guitar riff before the pounding drums and deep bass line come in as well, Happy Birthday is a faster paced ear worm of a tune that has a great sense of building throughout its verses. It kind of reminds me of Camp Cope – which is no bad thing. The chorus of ‘Happy birthday to you’ is far from the cheery tone that you might typically associate with that phrase, as the song is about wanting to forget someone whom you don’t hold fond memories of in your mind. If big fuzzy, almost grungey guitars are your thing then you may well like the breakdown section of this track. The repetitive but super compelling emo-style riffage continues into the fourth track, Feral Rat Anthem. Like Sober Haha Jk Unless, this is a slower paced tune but it packs no less punch than some of the louder songs on the album. Eric grows angrier and angrier throughout the track’s four minute duration while singing about a particularly despicable and toxic human being. The culmination of all that pent-up anger results in a stunning bridge section that sees out the song – ‘None of this is fucking tight, None of this has ever been right, ’Cause everyone knows you’re a lying cheat, And I hope you’re always feeling incomplete, And you can go rot in hell, And I really hope you learn and never forgive yourself, Because everyone knows you’re a lying cheat, And I hope you’re always, always feeling, always feeling, always feeling, from everyone you hurt, I hope you’re always feeling incomplete’.

I may have mentioned already that this is an emotional album but with Sheetz vs Wawa Eric truly lays bare some of their most intimate and troubling thoughts and feelings – ‘I'm tryna figure out where I went wrong, Have you been this person all along? The couch wasn't good enough for you, Climbed into my bed when I begged you not to’. The song is about dealing with being at your absolute lowest low and struggling to define what it is that is expected of you. It’s difficult to know what more to say about such a deeply personal song so I’ll just suggest that you listen to it (and the whole album) yourself instead. The penultimate song on South Loop Summer sees the volume and pace cranked up for a relentlessly catchy, relatively short Dungeons & Dragons themed track. With Sour OG RPG, Hospital Bracelet cleverly have a song that is seemingly about being an unsuccessful character in everyone’s favourite role playing fantasy game but could quite easily translate to real life relationship problems. Musically, I’m reminded of Paramore but you wouldn’t ever find Hayley Williams singing ‘I’m a small rogue with no self-control, Chaotic neutral who, Can’t find a home, And you’ve got the people lining up at your door, You’re a bard with a guitar with a voice for the scoreboards’. I love this song so much and, damn, I miss playing Dungeons & Dragons. Bringing the album to a close is Summer Friends. I always think it’s fairly important for a closing track on an album or EP to sound like the last song and that’s certainly what we have here. Summer Friends feels like a combination of all that came before it – and then some. It’s emotional, of course, but it also feels more hopeful and resilient than some of the preceding tracks on the album. Lines such as ‘And I will keep on playing shows, And writing music no one knows, Because it’s worth a shot.’ make me want to throw my fist in the air in unity and agreement. The song, and indeed the album, feels like end of a certain chapter in Eric’s life before they move on to bigger and better things.

Is this my favourite album I’ve heard so far this year? Yes, I think it is. It’s been a little while since I’ve been this excited about a new band and/or new album – I literally discovered this band two days prior to me writing this review – and I want everyone I know to check this out. Please.