Album Review: Pride Was Somewhere Else by Career Day 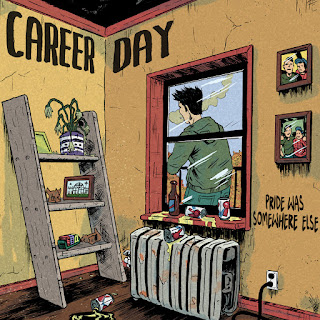 The name of the first song is Monument. After a quick audio clip, Desmond Zantua’s vocals immediately come in giving you a quick impression of what to expect from Career Day. Clean and dare I say poppy vocals accompany some interesting guitar tones and a drum beat that builds towards the song properly beginning. What really did attract me to Career Day is the high level of musicianship that’s found throughout the EP. As the song moves more towards the verses it gets more urgent and that’s when the song really comes into its own. A great start to Pride Was Somewhere Else. The second song is titled Deathbed Regrets. The track begins with some fantastic guitars and a great drum beat that really hooked me in from the beginning. When the chorus hits the song really comes to life and has me wanting to bounce. The song is about dealing with a break up and feeling bitter about it. I would’ve loved to have heard more gang vocals on the chorus, I think that would have taken the song to another level. The third and final song on the EP is Truth Changes. Again the song starts out with a great guitar riff that hooks you in. The guitar is joined by Desmond’s vocals. They’re quiet but move at a high tempo which makes for a very interesting sound. The urgent opening then leads to the full band coming in and playing the song in a chugging style. It’s the sort of melody that will get the crowd banging their head along with the song. As the song goes on it builds and builds, hitting some big highs before quietly finishing, bookending the track. The song is about moving on from your past and realising that everything changes whether you like it or not. This is probably my favourite song on the EP.

If you’re new to Career Day, like I was, then this is a great introduction. Emo is never my go to genre when I want to listen to new music but I really enjoyed Career Day and Pride Was Somewhere Else. It features some great songwriting and musicianship. I feel like it’s one of those releases you can listen to two dozen times and still find cool little intricate things that you like.
Stream and download Pride Was Somewhere Else on Bandcamp here.
Like Career Day on Facebook here.

This review was written by Colin Clark.
Posted by ColinsPRW at 12:24:00