I’m always a fan of a good split, so when I saw that A-F Records were releasing a split single from Ship Thieves and Reconciler my interest was very high. I’ve been following Reconciler for a couple of years now but this was the first new music I’d known of from Ship Thieves in a little while and I was very keen to check out both songs. 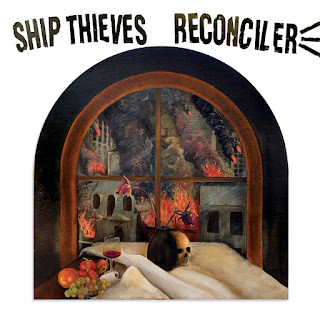 Ship Thieves start the split with their song Nothing Now. For those unaware, Ship Thieves are the project of Hot Water Music’s Chris Wollard. As soon as the song begins and Wollard’s booming voice comes in there is a great feeling of familiarity. The song begins with a pounding drumbeat and some guitar effects that soon transition towards a more standard riff that you would perhaps expect from Wollard. When his vocals come in it’s a powerful moment that ensures the song has fully hooked its claws into you. I really enjoyed how urgent the song feels, in no small part to that drumbeat I mentioned earlier. I’m assuming that this song will be used for a full Ship Thieves release later in the year. If that’s the case, I am very excited to hear some more because this is great.

Reconciler’s track is named Push To Break. I’ve been following Reconciler since discovering their album Set Us Free in 2019 and I immediately became a fan. Push To Break is another great track from the Atlanta-based three-piece. The guitar riff that welcomes you into the song really pumps you with energy and the shift in key before the vocals come in really gets you ready to have a good sing. Those opening few lines come at you at quite the pace, again adding so much urgency, but when the chorus kicks in it’s a real fists in the air moment. Joseph Lazzari’s vocals sound brilliant throughout, whether it’s during the urgent verses or those big choruses. If you’re new to Reconciler then this is a great introduction to the band.

I’m assuming that both bands have new music coming out this year and this split is a great teaser for those. Dip your toes in now and before diving straight in later in the year.
Stream and download the split on Bandcamp here.
Like Ship Thieves on Facebook here and Reconciler here.
This review was written by Colin Clark.
Posted by ColinsPRW at 13:23:00