Album Review: Scooter Jeezie: I Think It’s Your Turn To Take Out The Trash, Margaret by Old Bones Break Easy

Old Bones Break Easy is the solo/side project of Dave Cavallo who is the lead singer and guitarist of Texan skate/pop punk band Dropped Out. On Boxing Day, Old Bones Break Easy released a brand new EP Scooter Jeezie: I Think It’s Your Turn To Take Out The Trash, Margaret. The songs were recorded to be used in an episode of the podcast The One Stars. It’s four songs in just over six minutes. As you could imagine, I couldn’t wait to review this. 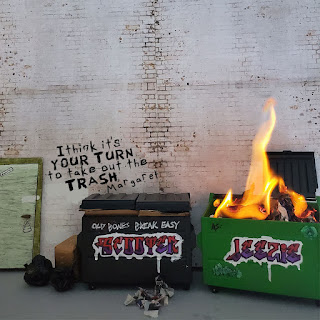 The first track on the EP is A Goofy Movie. At just over a minute long, the EP starts with its shortest song. It starts out quickly, getting you hyped for what is to come. Lyrically it’s super simple, it’s mostly “what’s your favourite movie?” for the majority of the song before proclaiming that A Goofy Movie is the best movie and if you think otherwise you’re wrong. Personally I’d argue the greatest movie ever is The Mighty Ducks (all three of them) but each to their own. Back To Bed manages to get up to seventy seconds long. I really liked the harmonies used throughout the song. It’s a more serious track about feeling like there’s nothing in your life worth getting up for so just wanting to spend all day in bed. I would have loved to hear a slightly longer version of this song so Dave could expand on what he’s saying in the track.

Dinosaur On A Skateboard is a fun song about Roger the skateboarding dinosaur. I’ve been doing CPRW now for five and a half year and I’m now quite sure that I’ve reviewed a song on every single topic. This is frankly ridiculous but it’s made me so happy. It makes me think of what would’ve been my favourite cartoon as a kid. Is there a cartoon about a skateboarding dinosaur? There should be – I’ve found the perfect theme tune. The fourth and final song on the EP actually takes up almost half of the EP’s duration which is a bit mad. It’s titled Bad Dong (Dad Bod). It’s another more serious song about getting older and wanting to be a really good dad. The song is more melodic than the previous songs and it makes me think of Lagwagon when they’re at their best. It’s nice to hear Old Bones Break Easy play a longer song that actually has a bit more substance. What a great way to finish the EP.

If you’re after a short EP that will make you smile then look no further than Scooter Jeezie: I Think It’s Your Turn To Take The Trash Out, Margaret. It’s important to find fun things, these days more than ever, so I thank Old Bones Break Easy for this.

Stream and download Scooter Jeezie: I Think It’s Your Turn To Take Out The Trash, Margaret on Bandcamp here.
Like Old Bones Break Easy on Facebook here.