On a recent hunt around Bandcamp, I discovered this great band from South Wales named Bone IDL. I was immediately impressed with what I heard from the band and was gutted when I discovered I’d found them too late to see if they wanted to be on CPRW Records’ Hidden Gems 2 compilation. Not to worry as I have a blog, you’re reading it now, where I can showcase great underground bands. In December Bone IDL released their debut self-titled EP and here’s my review of it. 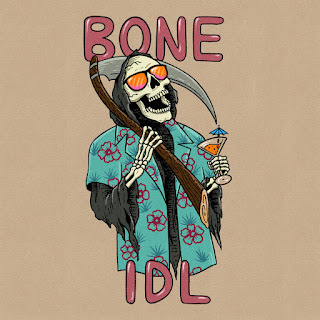 The first of the five tracks on the EP is named Kaleidoscope. As you would expect from all great pop punk EPs, it begins with a flourish. The opening guitar acts as a siren, the drums and bass build up towards the vocals which hit you like a brick when they come in. They are absolutely ferocious and I was not expecting it. I love them though. This is the type of aggression in music that I really enjoy. The song is about the break-up of a relationship and how usually it’s not just one person’s fault. Next is The Local (Anaesthetic). This is a song about using alcohol to try and solve your problems and the effect that has on you. Vocally the song is more melodic, though there are times where that angry monster does come out. Perhaps that’s a metaphor for what the alcohol is doing? The song is less urgent than the previous track, this really allows for the storytelling element of the lyrics to really shine through.

Synonymous is the title of the third track. This song shows off both sides of Bone IDL. The first half of the song is super melodic, the opening two verses are full of great hooks and it just builds wonderfully. When we reach around the halfway point of the song we are treated to a great guitar solo (that really shreds) before that intense vocal comes back and the song finishes in this heavy manner. This is another song about the ending of a relationship. The penultimate song is 1992. I think that this is a song about holding on to your youth and your dreams when everyone around you tells you to do otherwise. This is a song a lot of people I know will relate to. The opening verse has this great walking melody that gives the song a great energy and will get you moving. And, as soon as the chorus hits, it’s time for a big sing-along! The final track on the EP is Second To One. This is where Bone IDL really turn up ready to rock. The track had me headbanging the entire way through and I loved how it again got more intense as the song progresses. The song ensures that the EP finishes much like it began, with a ferocity that feels like getting hit by a brick.

Bone IDL are a new band that I can already see getting quite a following. They have a sound that I don’t hear that often anymore and that has me excited.
Stream and download Bone IDL on Bandcamp here.
Like Bone IDL on Facebook here.
This review was written by Colin Clark.
Posted by ColinsPRW at 12:02:00