As rewarding as being a DIY punk gig promoter can be it can often be thankless, frustrating and hit you very heavily financially. Speaking to many friends who have promoted gigs over the years, they have often become jaded and disillusioned and leave promoting gigs to the other people. To reach twenty years in the game is an incredible achievement and that’s something the legend that is Ollie Ward of Till The Wheels recently achieved. To celebrate the big milestone, Ollie decided to put on a three day festival in New Cross named Till The Fest.

Ollie originally announced Till The Fest whilst the UK was in the midst of a lockdown and, if I’m 100% honest with you, I was very sceptical on whether or not the weekend would be allowed to go ahead. As time went on and restrictions gradually began to ease, my confidence in the festival actually happening began to grow. I quickly bought weekend tickets and even began to get very excited. As the months went on, more and more amazing bands continued to get added to the line-up and it soon became a three day, three venue, over 50 bands behemoth of an event. 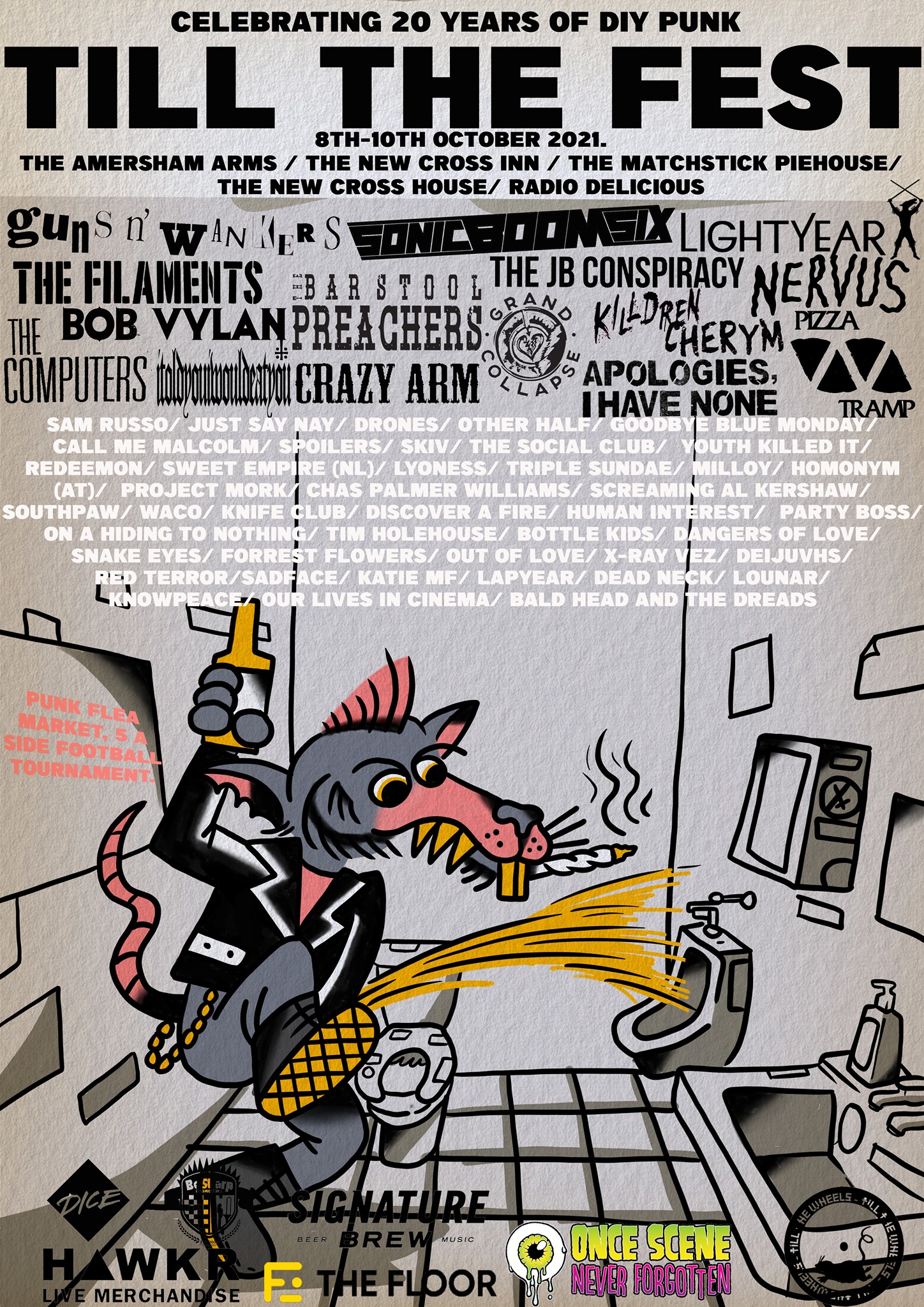 Till The Fest would be taking place at the New Cross Inn, The Amersham Arms and Matchstick Piehouse. There would also be a record fair happening upstairs in the New Cross House pub and a five aside tournament happening at Fordham Park. There was absolutely loads going on! It was also a wonderful opportunity to have a punk rock family reunion, with friends from all over the UK making the pilgrimage to South East London. As the weekend grew closer, I was just as excited to see people I hadn’t seen for nearly two years as I was to see some of my favourite bands. It was due to be an emotional weekend.

We arrived in New Cross, dropped our bags off at our Air BnB, freshened up and made our way to Matchstick Piehouse. This was our first time going to Matchstick Piehouse and Emma and I were very grateful to bump in to our pal Tommy of BaldHead And The Dreads to help show us the way. We arrived at the Piehouse and immediately bumped into loads of friends and it was a bloody lovely feeling. Music hadn’t even begun yet and we were already having a magical time.

After saying lots of hellos to lots of people, we needed to get some food before the bands began. We met up with CPRW member Lara and her husband Nicky, who had travelled from South Wales for Till The Fest, and took them to our favourite falafel spot, Beirut. Unfortunately I got us lost on the way there, shout out to Tommy for helping out again, so we sadly missed SKIV. I’m sure they put on a 10/10 show to open up the festival at The Amersham Arms.

Thankfully we did get to New Cross Inn in plenty of time to see the band tasked with opening the festival there, our lovely friends Goodbye Blue Monday. Despite it not even being 7pm, a very decent sized crowd had turned out for the Scottish boys and were treated to another superb GBM set. Graham noted that they would be opening with a brand new song for their first show back since the lockdown. This new song, along with the couple of others, sound amazing and has me even more excited for their debut album, whenever they’re able to get it recorded and released out in to the world. Of course there was also big sing-alongs for favourites such as Misery-Punk Ruined My Life, Love Is A Noose For Two, Trigger Alert, Take Your Pills and Exile (which was my first time seeing it live since it was released). Seeing Goodbye Blue Monday always fills me with the warm, fuzzy feeling and leaves me with a sore throat. What a band. What a time. 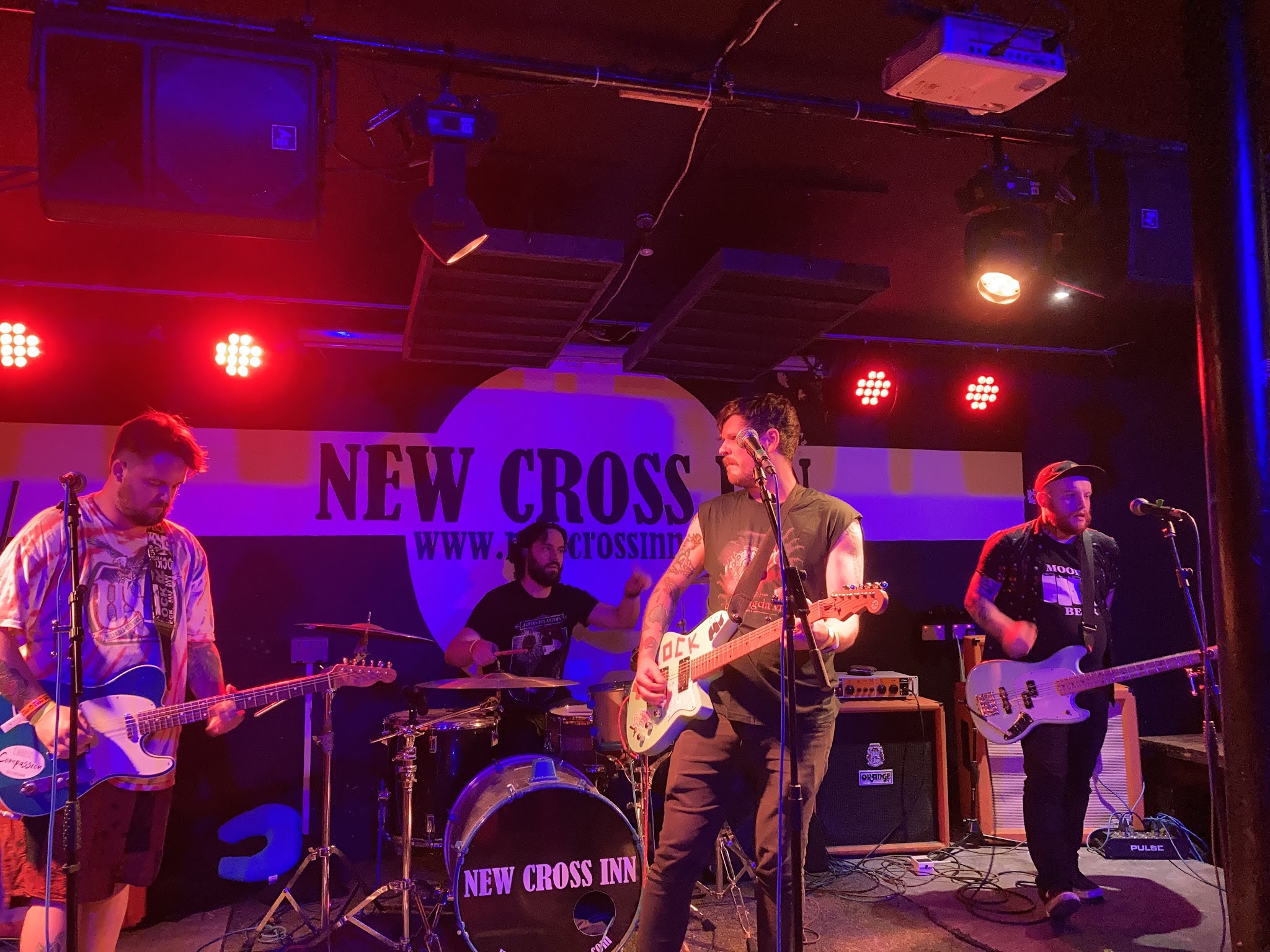 We didn’t get a chance to hang around NXI and have a proper chat with the GBM boys as another of our lovely friends, Katie MF was taking to the stage at Amersham as soon as they finished. After a power walk for the five minute journey between the venues, we made it with a couple of minutes to spare. This was somehow our very first time in the Amersham Arms and I was immediately impressed with it as a venue. There was a nice wide stage, with no pesky pillar blocking the view of the stage. In fact, you could probably get a decent view of the stage from anywhere in the venue. Before the band started, Katie announced that the band hadn’t been in a room together since March 2020 so hadn’t practiced their set. If Katie hadn’t have said that I don’t anyone would’ve noticed as they played a cracking set. Playing the more uptempo tracks in the band’s catalogue, really tailoring for the punk crowd, for me it was another set of sing-alongs. I’ve said many times over the years that Katie has this magnetic quality on stage that cannot be ignored. Backed by one of the best rhythm sections in punk rock, this was another superb performance. Just like GBM before them, Katie MF have a load of high quality songs that are yet to be recorded and I can’t wait for them to get released. 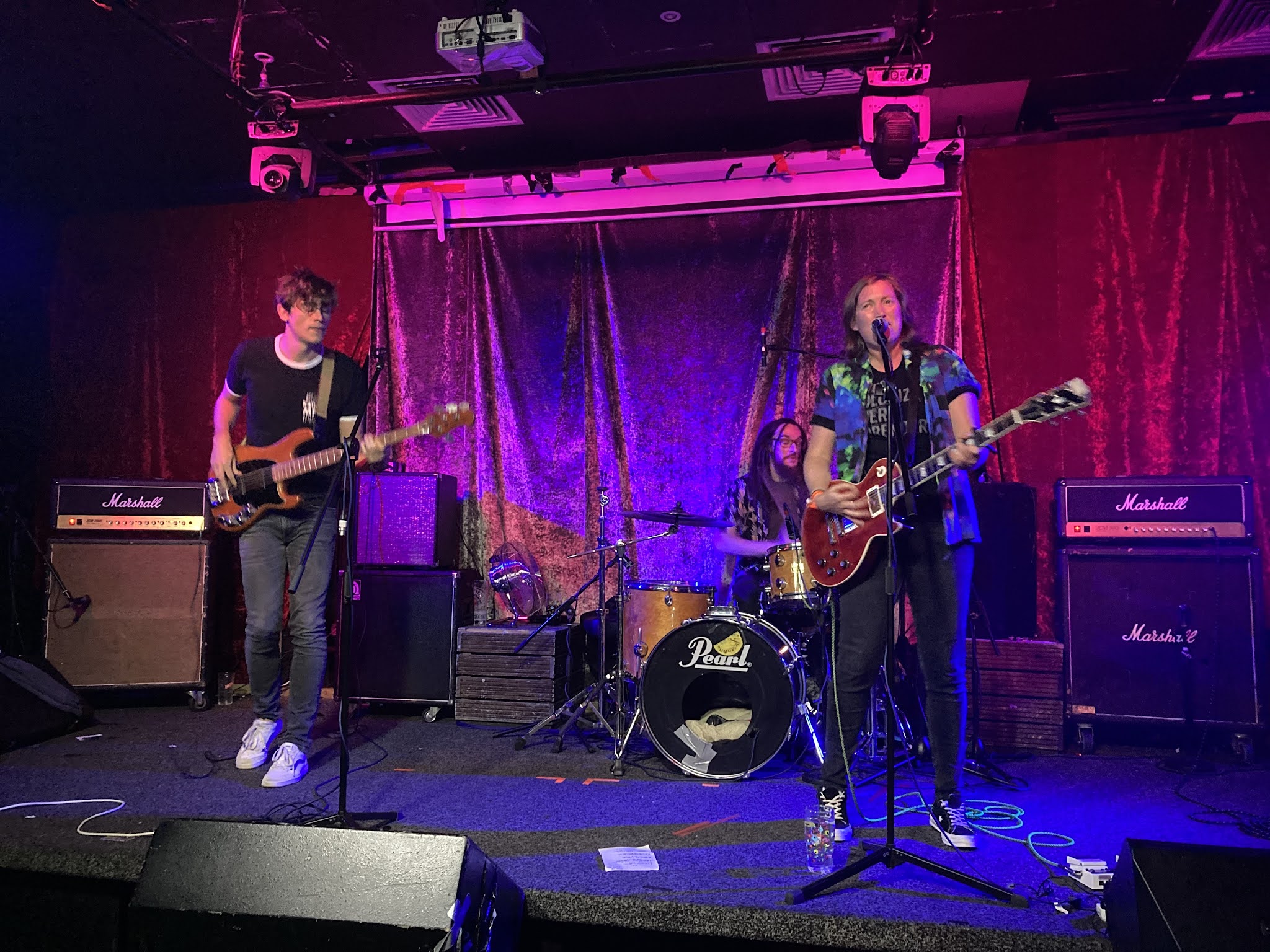 Unfortunately we had to leave Katie’s set one song early as Just Say Nay were starting back at NXI. I always say that it’s a sign of a good festival to have clashes but, for me at least, this was a stinger. We arrived back at very full looking NXI to see Just Say Nay already well into their set. Sadly during lockdown trombone playing goblin king Mikey T decided to leave the band, so on this occasion they were only playing as a seven piece. Yes, seven members is the fewest amount of people I’ve ever seen on stage when I’ve watched Just Say Nay perform. This did allow lead singer Jak to move around the stage more freely and he did a magnificent job in getting the crowd amped up. Not that Just Say Nay need to do much to get a NXI crowd warmed up as they are much loved at the venue. We arrived back at the venue as the band were playing Tempted from their debut EP Shit Out Of Luck before moving on to crowd favourite, With A Twist Of Lemon. With A Twist Of Lemon has a great ending that gets the entire crowd chanting along with the band. It always goes down well but on this occasion it went down so well that the crowd did their own extra verse of the song. They probably would’ve done another one if the band hadn’t have moved on to the next song, Pass Me A Cloud. The band finished with Low Blow which earned another huge sing-along. Just Say Nay are one of the best live bands in the country – make sure you see them as soon as you have the chance! 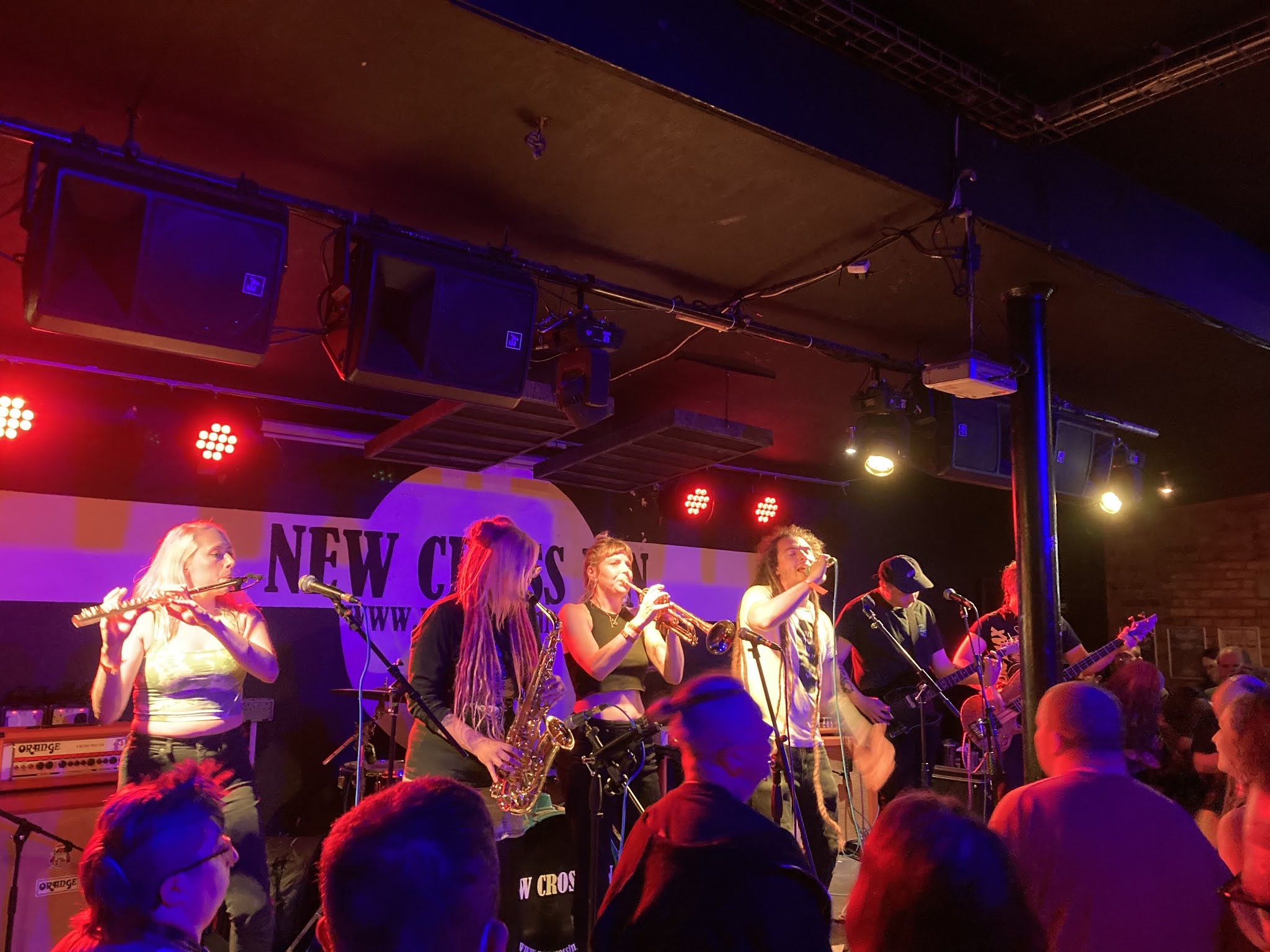 We hung around at New Cross for the next band, The JB Conspiracy. We’d recently been able to see JB in Bristol for Fishstock but that didn’t dampen any excitement for seeing them again. I said in my review of Fishstock that JB get better each and every time I see them live and this trend continued once again. Playing a mix of old favourites and new ones from 2021’s Beginnings, this was the band’s second London gig since Beginnings’ release and it was clear that the crowd had spent plenty of time with it. It’s always tricky for a band releasing new music so long after they released two absolute beloved albums. Will people care about the new stuff or do they just want the classics? It really says a lot about just how good Beginnings is as songs like The Long Road To Zurich (one of my favourite songs of 2021) and Guiding Lights got just as good receptions as The Escape or This Machine did. It’s always nice to see a band on stage, who’ve been doing this for so many years, still clearly having the time of their lives. Between songs there was always a big smile on lead singer Lank’s face. I was sad that the band only had a forty minute set because I would have happily watched, sung and danced along with the band for much longer. Every time I see JB they prove that they are one of the very best ska punk bands that the UK has ever produced. 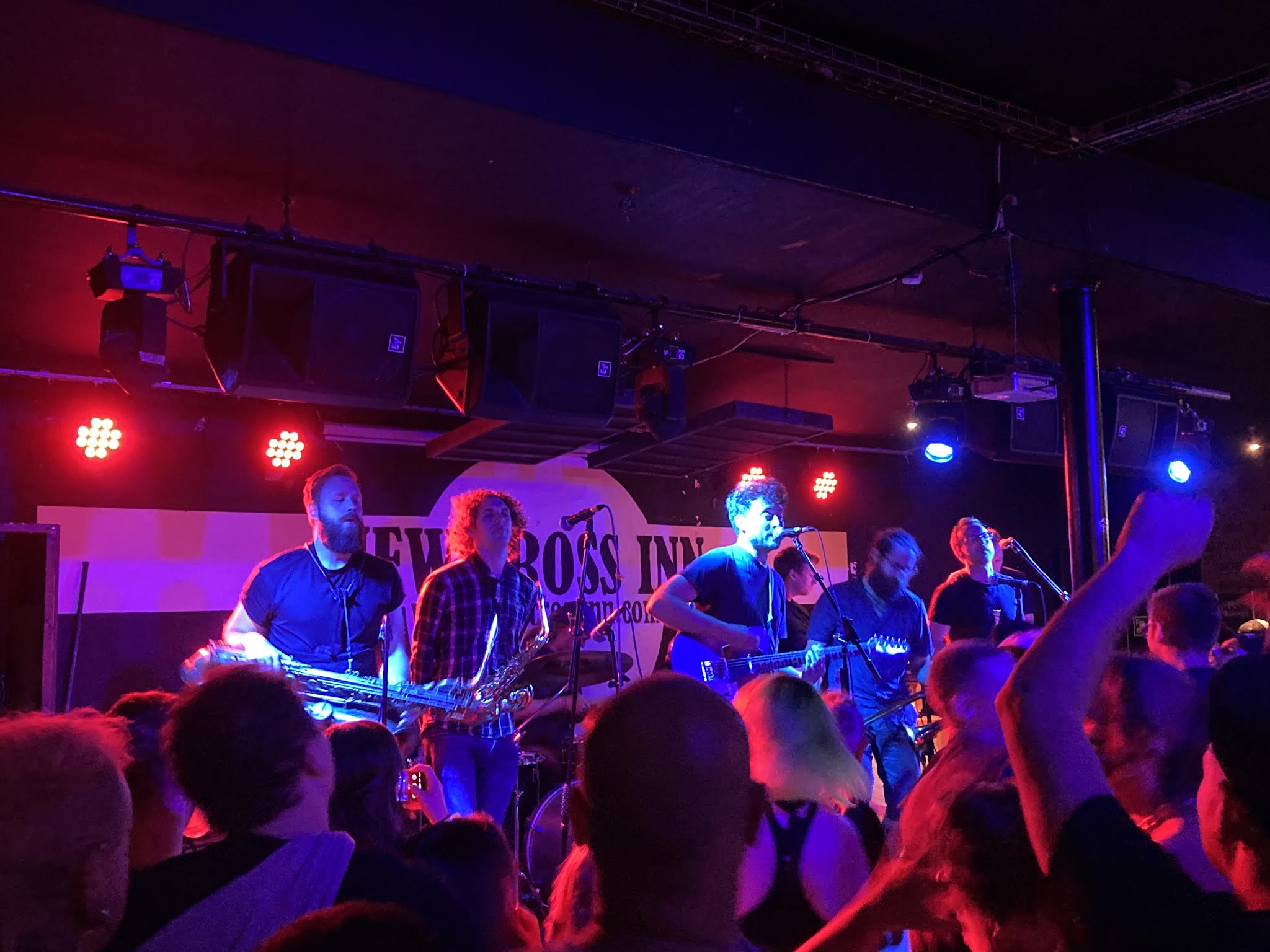 The choice of the night’s headliner through up another tricky decision on who to see. It was between The Bar Stool Preachers and The Filaments. Both are phenomenal live acts so I shouldn’t complain about having to pick between two fantastic bands. We decided to go with The Filaments at Amersham Arms. The choice was made because BSP were the last band we saw before lockdown started and we hadn’t seen The Filaments for years. Plus I always love seeing Pook bounce around on stage and he was playing in The Filaments. We made the walk back to Amersham with our new friend and NXI legend Fred The Punk. If you’ve not made friends with him yet, this is something I recommend you do. He’s a lovely man who really understands what this whole punk community thing is about. Amersham was already pretty full when we reached the venue but we managed to find a good spot from the side of the stage. The Filaments were a little late to take to the stage, I didn’t mind this though as it gave us time to have a little chat with pals. When the band did get on the stage they quickly began to tear the roof off the venue. The set was mostly comprised of the band’s more ferocious songs which got the mosh pit going hard. Unfortunately there was one person in the pit who was going too hard and ended up causing a fight. This lead to the band stopping a song midway through and jumping in to the crowd to sort it out. I believe that the instigator of the fight was then removed from the venue. It’s a shame that after almost two years of not having nice things like Till The Fest there was an idiot who didn’t know how to behave but big love and respect to the band and venue for making sure everyone was safe and the show could continue. I feel like this incident could’ve put a lot of bands off their stride but not The Filaments who stormed through the rest of their set. The highlight for me was a rare run out of Trevor, a song I’ve not seen the band play for years and it remains my favourite Filaments song. This was a great way to finish off night one of Till The Fest. Night one of Till The Fest had been a massive success and all around us there were big smiles everywhere. There were positive vibes all around and there was much excitement for what was to come for the rest of the weekend.
This review was written by Colin Clark. Photos by Colin and Emma Prew.
Posted by ColinsPRW at 11:21:00