This third instalment from Grand Collapse takes its name from the emotive scenes witnessed with the tearing down of the Colston statue in Bristol. Empty Plinths leaves you with hardly any time to catch a breath between songs – this itself reflecting many of the themes explored in the album, including race and class divide, as well as animal and human rights. There is a hint of the melodic guitar from previous albums, though with a more thrashy, metal sound to it, which can clearly be heard on Without Let or Hindrance and Empty Plinths. 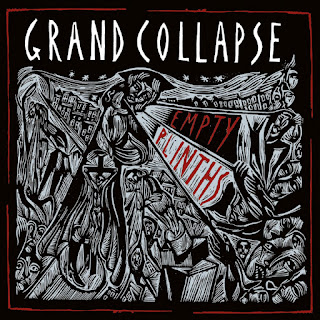 With the opening song, Waves, we are taken on an emotional journey of the suffering of the refugee. The sadness and struggle with every twist and turn of a journey to an “elusive haven”, only to be sneered at by “megalomaniacs and jingoists” upon arrival. Waves reads as a short story, with no happy ending.

More intense images are summoned with the horror of Amygdala. A brutal, first-person description of the suffering caused by the impact of a nuclear bomb. “Feel the burning from the fallout, faces melting in the street, out of breath from the chase”. Glenn’s galloping drums serve as a backdrop to the harrowing images generated, with Jon’s thrashy guitar licks creating the impression of a collapsing street. The brutal imagery brought with these lyrics is as intense as the music, forcing us to not only listen, but to also dwell in the pain, sadness and confusion.

The pace of Claret Thirst reflects the subject of the song – an animal running for their life, grass, flowers, trees a blur as they try in vain to escape the advancing gunman on their tail. But this song is also about anger. Anger at those who kill these creatures for fun, anger that these killers use terms like “preservation” and “safety of breeds” to placate the public when questioned about their reasoning behind their actions. They are being called out as the bloodthirsty savages they are. Spare me the bullshit. It’s impossible to not feel the emotion and frustration in the delivery of the song.

Empty Plinths is as unapologetic as it is angry, aggressive and honest, with a fitting tribute to Icons Of Filth as a hidden bonus at the end of the record. Most of this album was written during 2020, with many of the social tensions experienced during that year being projected through the writing. You can feel the anger, you can hear it. And with such honest and descriptive lyrics, you can almost see it.

A brilliant third album from a much loved band who show no interest in slowing down.
Stream and download Empty Plinths on Bandcamp here.
Like Grand Collapse on Facebook here.
This review was written by Lara Roberts.
Posted by ColinsPRW at 12:23:00