Album Review: Back To Basics by HEY-SMITH

HEY-SMITH are a long running ska punk band from Osaka, Japan. I first became aware of them due to Asian Man Records releasing their 2020 album Life In The Sun. I absolutely loved the energy of the album. It was an album that was relentlessly fun from start to finish and had me itching to see them live. This year, HEY-SMITH have followed Life In The Sun up with a new EP named Back To Basics. It was only three tracks long but as soon as I listened to it I knew I had to review it. 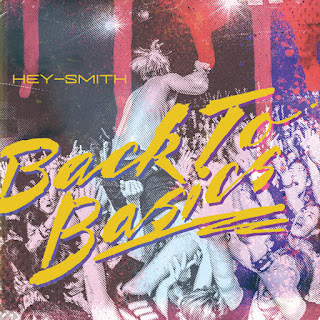 The first track is titled Proud And Loud. It’s a mostly instrumental track, aside from some gang shouts of “Proud And Loud”, that’s just under ninety seconds long. It’s a song that is about being unashamedly a big fan of ska punk. The brass section carries you through the majority of the song but when the gang vocals do come in, the track gets a bit crunchier with the guitars and drums coming to the forefront. A very solid start to the EP.

Up next is Be The One. After the upbeat vibes of the opener, Be The One showcases the heavier side of HEY-SMITH’s sound. The track begins with some building guitars before some horns come in signalling the song is ready to go. The opening vocals swap between lead singer Shuhei Igari and gang vocals, this gives the song so much energy. The vocals soar like you would find on a modern skate punk song making me think HEY-SMITH would be equally at home on a skate punk line up just as much as on a ska punk one.

The third and final song is named Fellowship Anthem. In true third wave ska tradition, this is a song about unity and friendship. About people coming together no matter what their differences might be and doing something good. Starting out with a horn riff that will get your knees up from the outset, Fellowship Anthem has arguably the most catchy chorus on the EP. This makes a lot of sense given the song’s theme. There’s such a sound of pure joy on the song that put such a smile on my face as I listened to it. The song is a hell of a lot of fun but it also feels important given everything still going on in the world today. I think this is when ska punk is at its best, it’s sharing an important message but is also a lot of fun.

The Japanese ska punk scene has always been jam packed with phenomenal bands and HEY-SMITH are among the best. Back To Basics feels like a great introduction for people before they jump into their extensive and brilliant back catalogue.
You can stream Back To Basics on Spotify and Apple Music and like HEY-SMITH on Facebook here.
This review was written by Colin Clark.
Posted by ColinsPRW at 12:13:00