You all must know about Andy B And The World by now, right? The project started by former Fandangle and New Riot bass player Andy Baker, where he travelled the world meeting up with musicians to put together a huge album featuring over 170 different people? If you don’t know it yet then I highly suggest checking out Andy’s YouTube page and learning all about the project and then reading our review of their 2021 debut album The First One here.

For obvious reasons that I’m bored of explaining, the launch party for the album was delayed until November the 6th, put on by our friends Be Sharp Promotions at the New Cross Inn. The day soon came around and I was excited. Not just to hear some amazing songs but to see how Andy B And The World would work in a live setting. But before that we had four awesome support acts to watch. 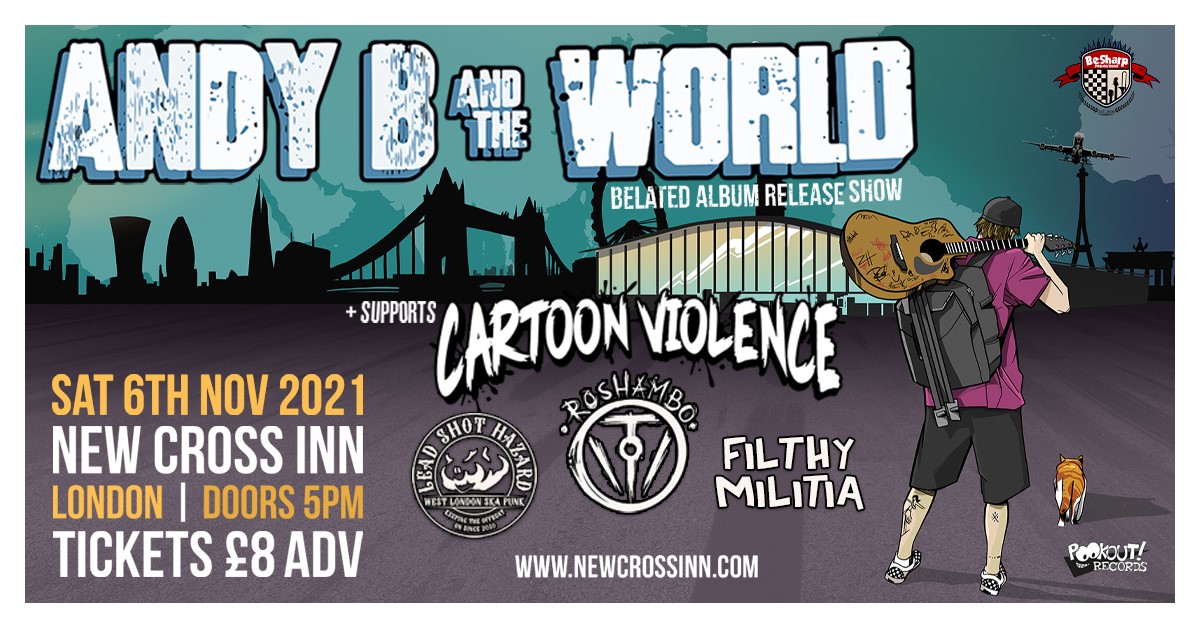 First up was Filthy Militia. Before the gig I was trying to remember the last time I saw Filthy Militia live and I worked out it was actually Halloween 2019, so this was well overdue. The five piece took to the stage and started with Little Sister, the final song from their debut EP Innocent Until Proven Filthy. The rest of the set was then comprised of songs from their upcoming new EP, Coping Mechanism, which is due to be released in the early part of 2022 on Pookout Records. I was seriously impressed with these songs and felt that they really showed a great amount of progress from the band. Mixing ska, punk, reggae and even a bit of dub together so seamlessly, it was really great to see. There was a moment in the set where the band’s frontman, guitarist and all around friendly giant announced that this was the cheesy part of the opening band’s set where they encourage the crowd to participate in a sing along. We expected some easy “whoa-ohs” or some “la-las” but no, Frosty taught us an entire chorus to sing along to. Filthy Militia were the perfect start for the night and I’m looking forward to seeing them again at the end of the month, back at NXI for Frosty’s birthday gig. 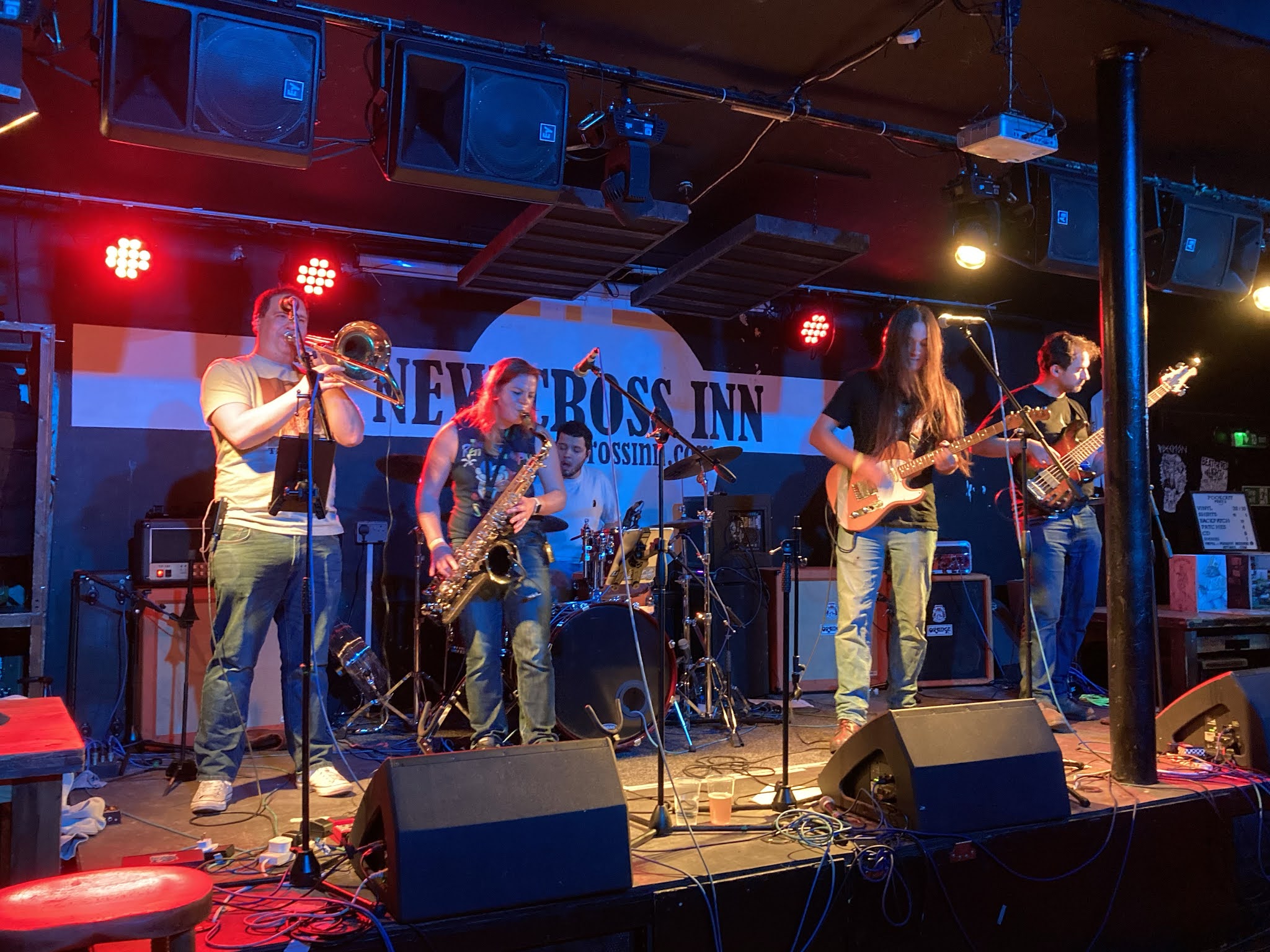 Next up were NXI favourites Lead Shot Hazard, who were back at the Inn for the first time since September 2019. I would guess that this is the longest they’ve not played the venue since they formed. That was also the last time I saw the band which, again, is too long. Something I’ve noticed a lot with all the bands I’ve seen since gigs have come back is just how happy every band looks to have had the opportunity to play live again. The joy on the bands’ faces is such a lovely thing to see. The six piece had been down in Hastings the evening before supporting Call Me Malcolm and 3dBs Down at The Pig so it was no surprise by how tight they were. I’m always super impressed with how good Lead Shot Hazard’s horn section is whenever I see them. They add so much to the band’s live show whether they are blasting out some killer horn riffs or dancing on the stage or – at times – in the crowd. The band know how to have a lot of fun, this is showcased no more than when they play a cover of New Found Glory’s My Friends Over You. During the song it had me thinking, gosh I’m getting old. The ska bands I grew up with covered 80s songs. These days the current crop of ska bands are covering songs that I loved when they were first released 15–20 years ago. The band finished with my favourite song off of their latest album Fires To Find Our Friends, Between Hell And High Water. The chorus of “we light fires to find our friends” felt even more apt after not being able to see so many of my favourite people for so long. 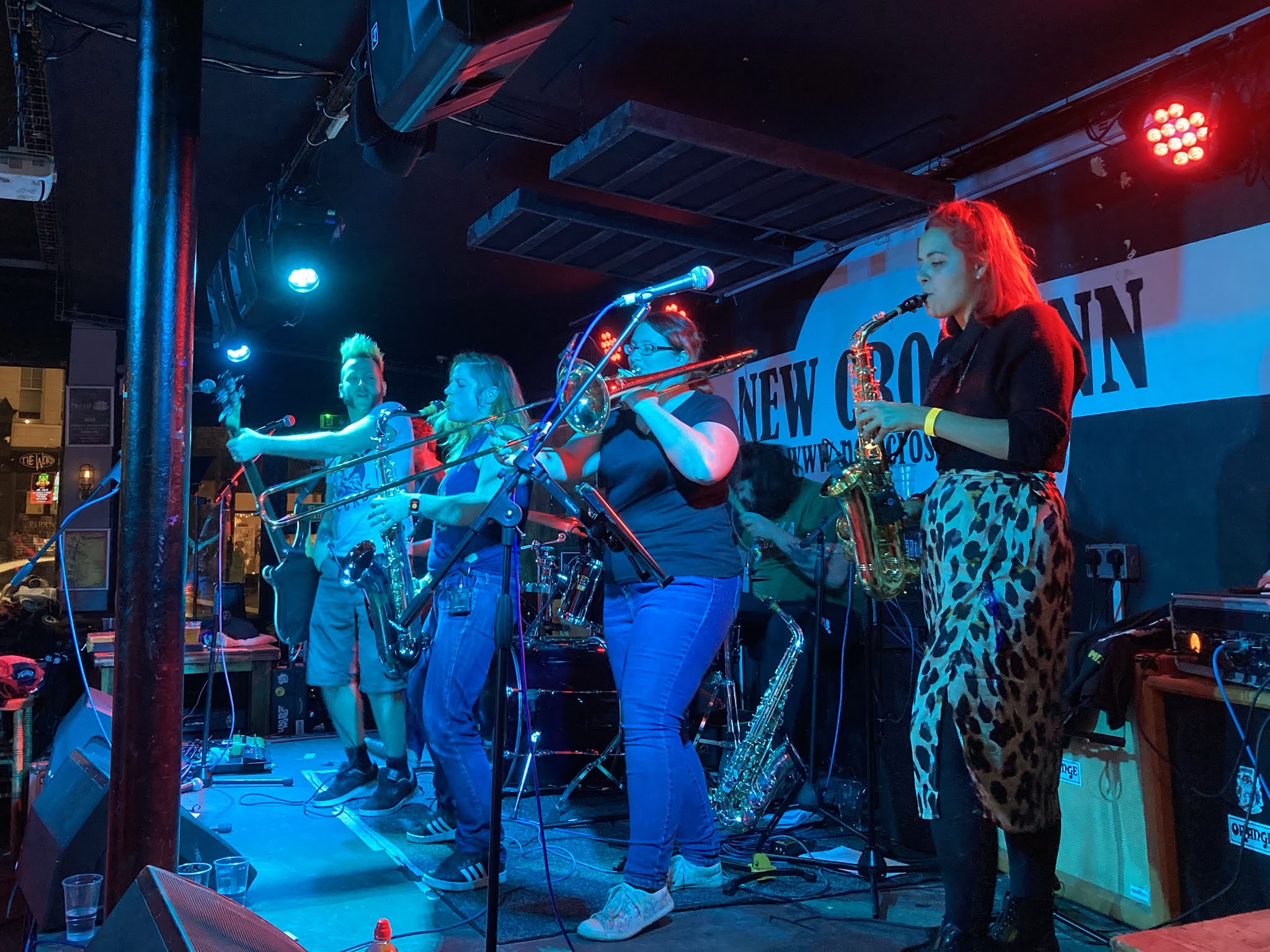 Following Lead Shot Hazard were Roshambo. Roshambo are a new skacore band with a load of familiar faces in the band. The six piece feature members of The Junk, Faintest Idea, Ducking Punches, The JB Conspiracy, Blag and Where’s Babylon? – this is a skacore super group. With the group of people that was gathered on the stage there’s no surprise that Roshambo were incredibly tight, you would’ve never known that this was only the band’s second ever show. Lead by the incredible dual vocals of Jake and Tom, energy filled the room as soon as they started their set. I love bands that have two lead singers especially when they work as in-sync as these two gentlemen. The two voices come together wonderfully. So far, Roshambo have only released two singles to the world but somehow each song of the set felt like a familiar friend and kept me transfixed to the stage. They had the whole room invested in the performance which is so impressive given the newness of the band. It’s been a while since I’ve seen a new ska band who have caught me like Roshambo did in this set and I’m already desperate to see them some more. Hopefully their commitments with their other bands won’t prevent them from playing a lot more in the future. If you’re not on the Roshambo train yet, it’s time to get on board. 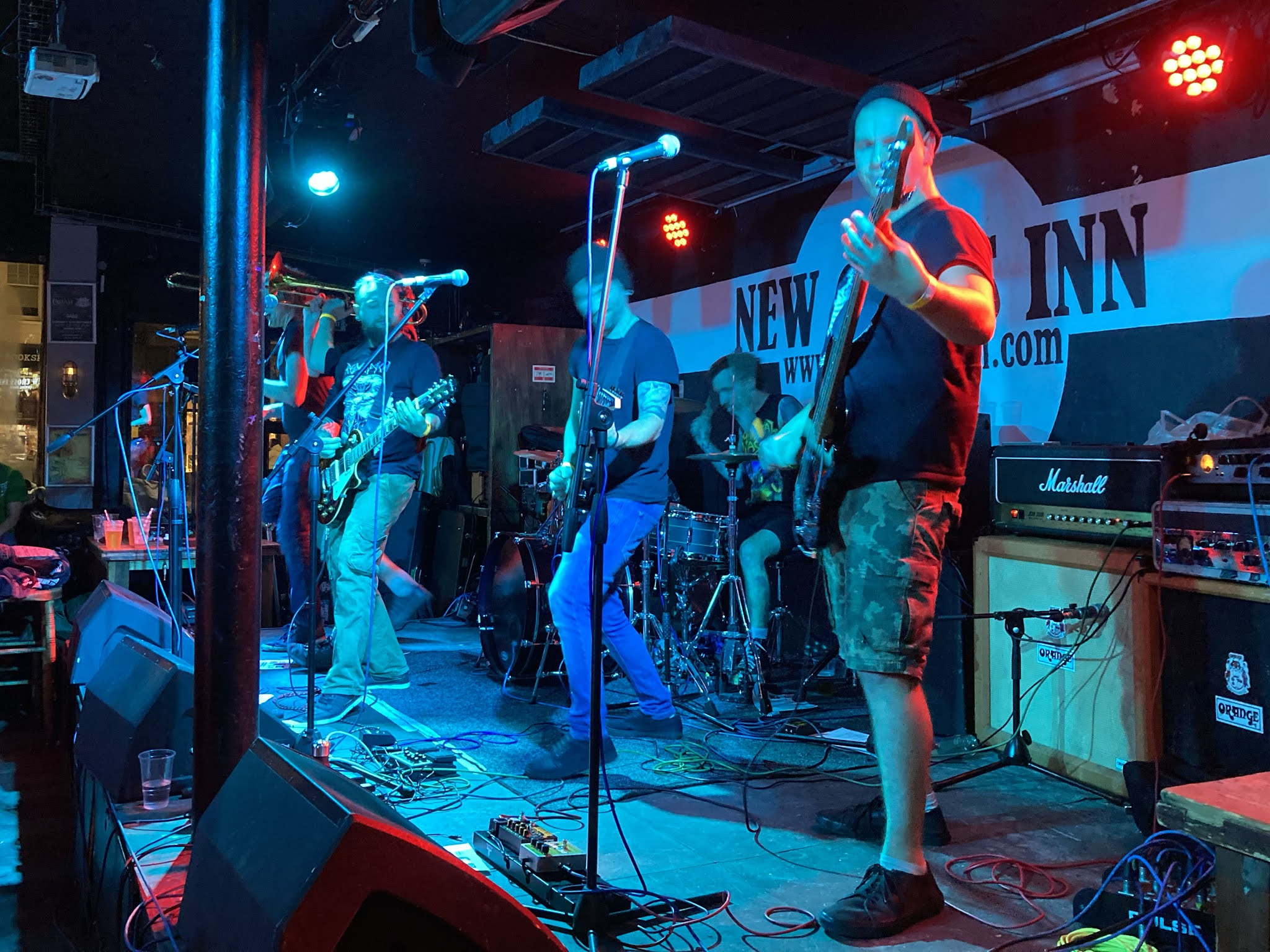 The penultimate band of the evening was Cartoon Violence, a much more established band in the UK ska scene. This was my first time seeing the Welsh two-tone act and I didn’t really know what to expect. What I encountered was a super energetic band that wrote brilliant ska pop songs. It didn’t take long for the band to get New Cross moving and having a great big knees up. The band tore through their set, trying to squeeze as many songs as possible into their time slot. This resulted in a fast and free flowing set that barely gave the audience a chance to stop. The band’s lead singer and keyboard player in particular stood out to me. He was (in the kindest possible way) a maniac behind the keys. I have no idea how he managed to play his keyboard properly whilst singing and dancing frantically. The gentleman is a seriously talented individual. I don’t know much about the band’s music to really talk about what they played but it certainly put a big smile on my face throughout the set and was a wonderful choice to finish warming the crowd up for Andy B And The World. 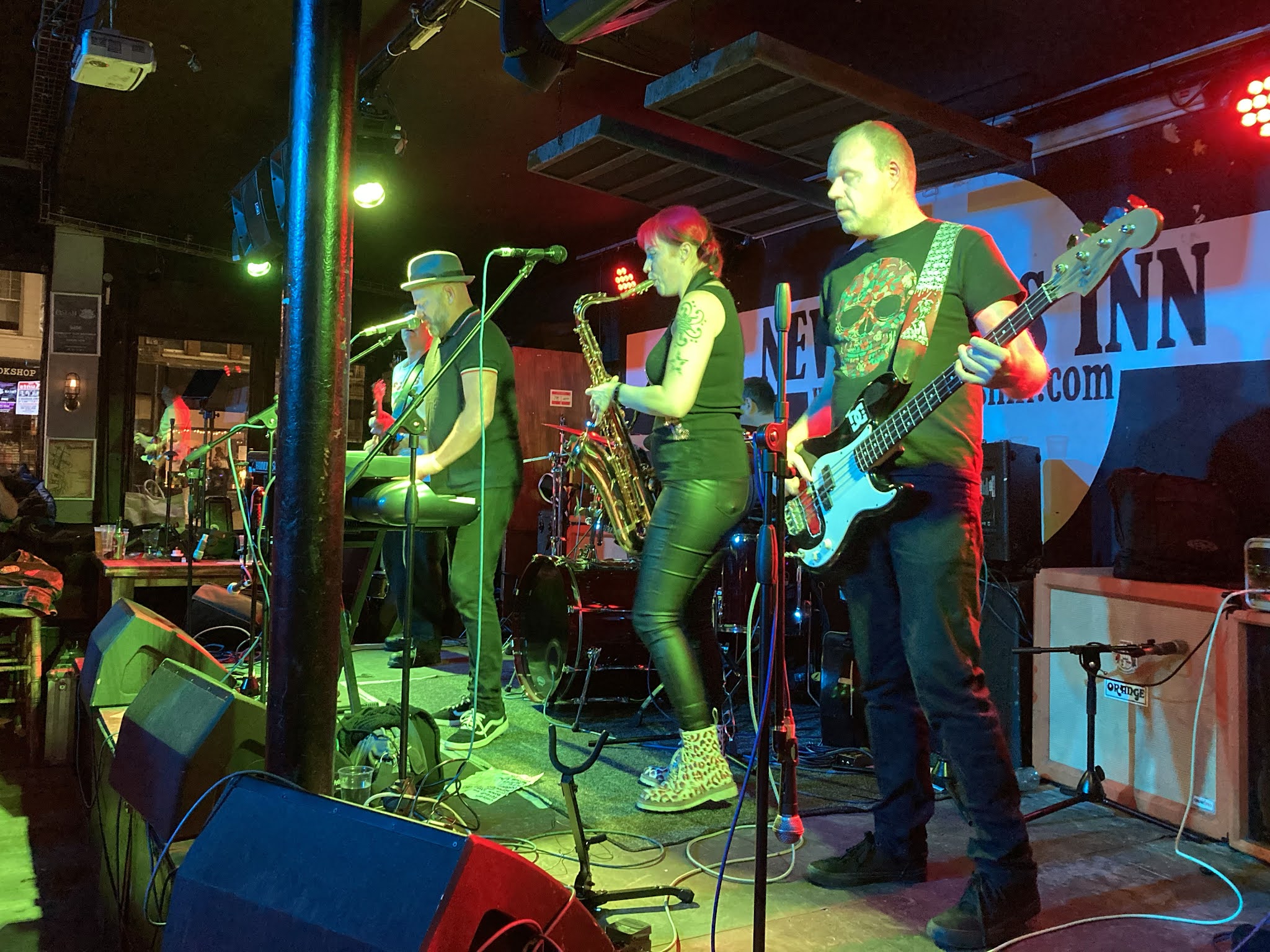 My questions about how Andy B And The World would work in a live setting were about to be answered. Basically, Andy had put together a band for the night, all of whom I assume took part in the album in some way, and then they also had some special guest singers lined up to sing the songs that they sang on on the album. I don’t know why it didn’t occur to me before they started the set, but the band would be playing The First One from start to finish. This meant that they started the set with the awesome Black & Blue. I believe this was also the first song that Andy B released to the world from this project. The gig immediately became a party with so much joyous dancing and singing along immediately. Andy took the lead vocal duties for the first couple of songs as unfortunately the person who was scheduled to sing the songs couldn’t make the gig due to illness. Bass player Sam also took some vocals duties to help Andy out as his voice was sore due to all the practising and talking to so many friends at the gig. Among the guest vocalists who were in attendance were Al from [Spunge], Andy’s former Fandangle and New Riot band mate Tommy, Aaron from Make It Better Later, Dick Narnia and Sash from Cartoon Violence. I did worry if the constant guests joining the stage would ruin the flow of the set but it worked really well. It seemed extremely well thought out. Which is not surprising given that Andy B organised an album with a million people on – he’s a logistics genius! There were some breaks from The First One. First being the band covering Frank Turner’s Recovery just because Andy really likes singing the song and the second being a song from the next Andy B album where they were joined by Jake and Tom of Roshambo for a track that sounds amazing. Something I really enjoyed about The First One is the variety of sounds on the album. I guess that’s what will happen when you have that many different people working on a project. This variety worked so well in a live setting as well. The set had something for everyone and left everyone feeling with such a warm and joyful feeling. I don’t know how often Andy B And The World will be able to play gigs but if you get the chance to see them I seriously suggest that you take it. It’s a big and ambitious project that’s come together amazingly. I can’t wait for The Second One. 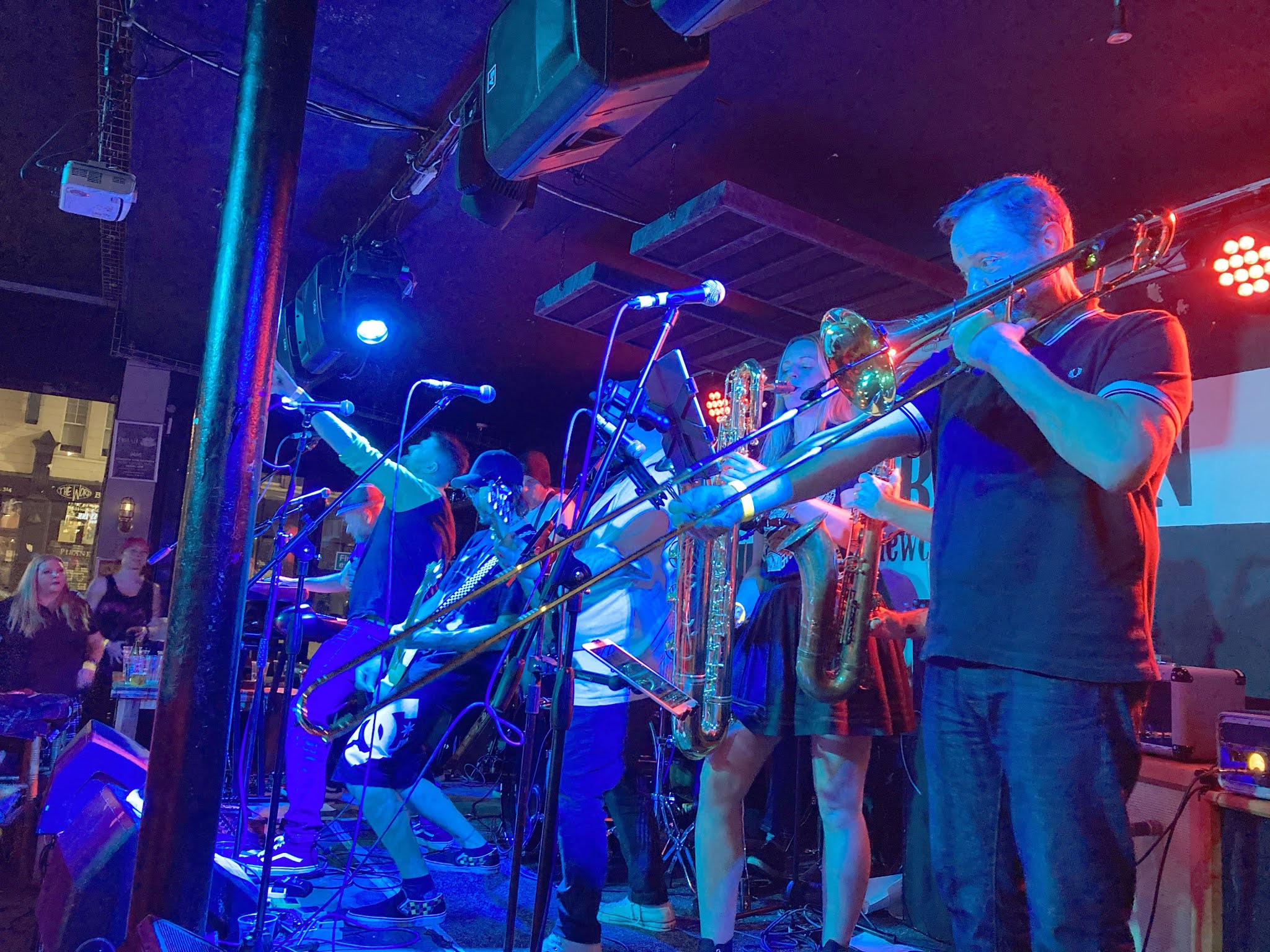 This review was written by Colin Clark.
Posted by ColinsPRW at 10:59:00