I was thinking the other day, something nice that has come from the all the bands not being able to play gigs for so long is that they’re all now back doing comeback shows. Every gig has felt like a big reunion with everyone in great spirits. It was now time for London’s Burnt Tapes to make their long awaited return to the stage with the help of Be Sharp Promotions. The whole gig felt like it would be a great big friends fest and that feeling was amplified with the addition of Triple Sundae and Katie MF. 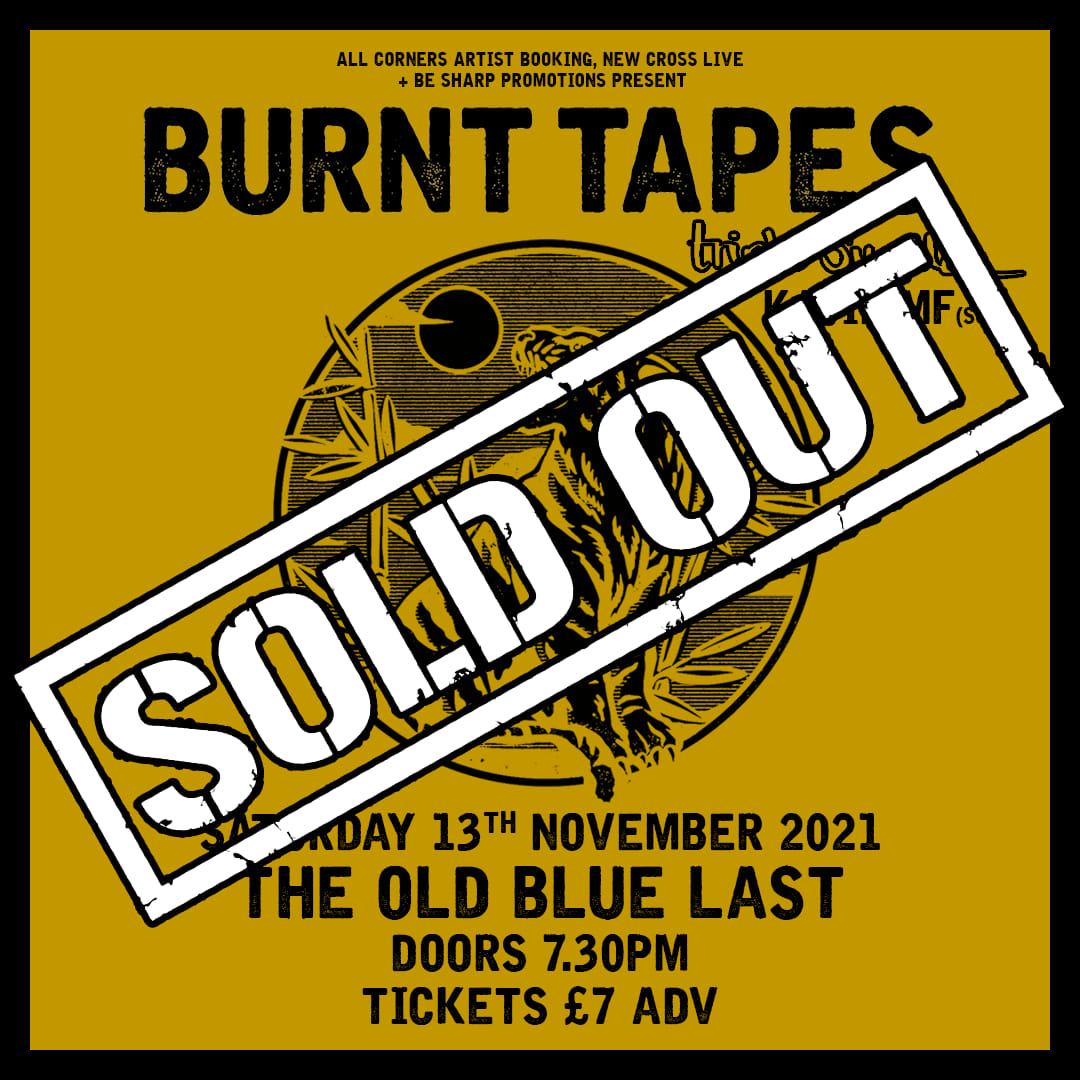 The gig would be taking place at the Old Blue Last in Shoreditch, a venue I hadn’t been to in years. Leaving Liverpool Street Station we were really taken aback by just how many people there were everywhere. You don’t get this many people in New Cross. After getting some food in Spitalfields market, we made our way to the venue and once we were inside there was a nice feeling of familiarity to be surrounded by all the pals from the New Cross scene rather than all those pesky Shoreditch trendy types.

The always absolutely delightful Katie MF would be opening the night. Katie was playing solo acoustic this evening and amazingly, despite seeing her play a lot over the past couple of years, this was my first time seeing her without the band. Something I believe Katie is very good at is tailoring her songs for the type of gig she’s playing. On this occasion, she played more of an upbeat and rowdy set of songs than she would perhaps would at a folkier type of gig. The set mostly consisted of unrecorded songs that are getting me super hyped about her next release, whenever it may be. Something I’ve noticed in her songwriting is that her songs are getting more uplifiting. Her previous release Everything Trouble Meant was an EP full of sad break up songs but the direction she’s going now seems to suggest there is a bright light at the end of the tunnel where everything will be fine. It’s a message I love. She finished a glorious set with a song that Emma thinks is titled Set It Alight which got such a fantastic reaction from the Old Blue Last crowd. The best way to start the night. 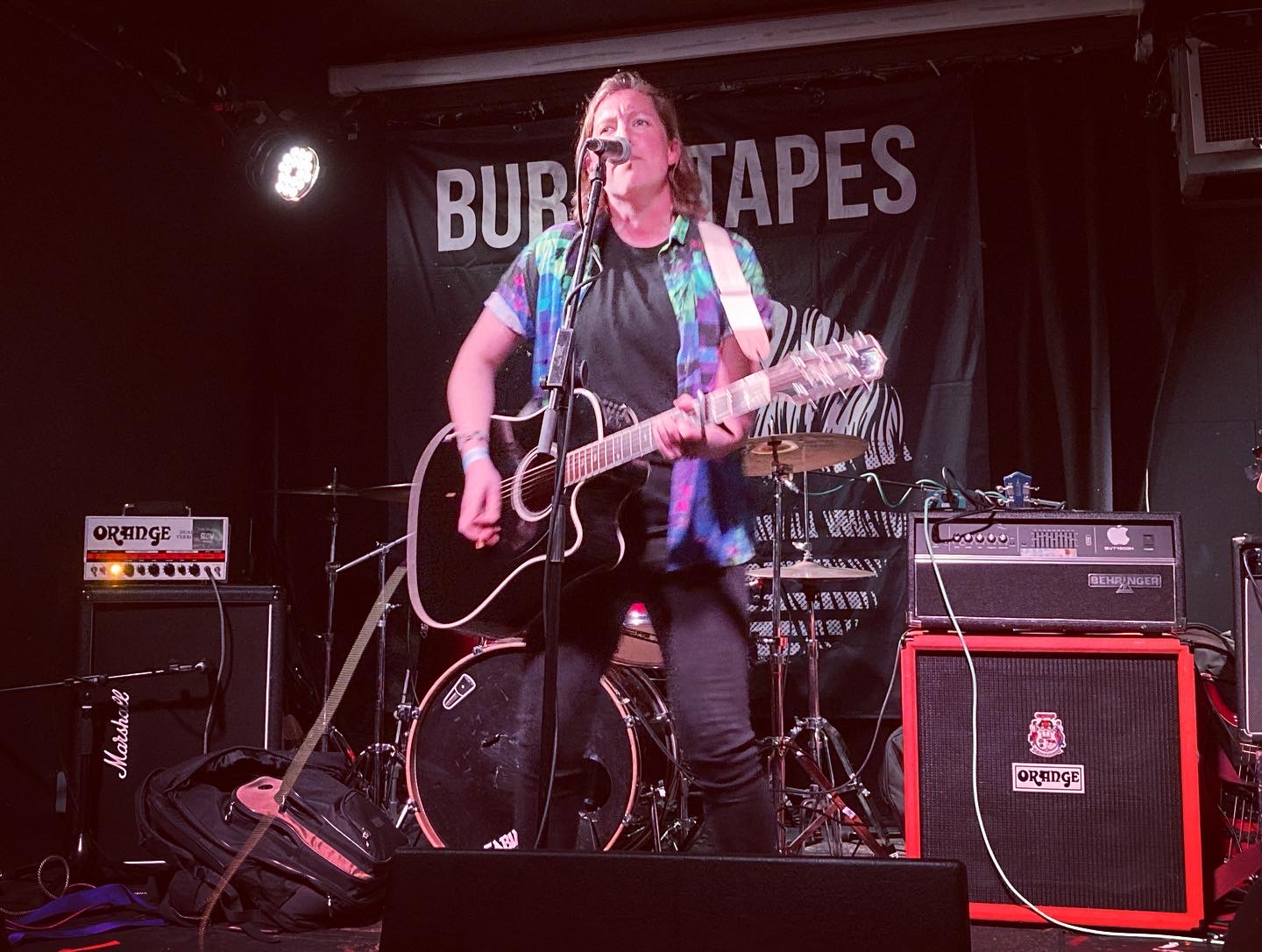 Next to take to the stage were Triple Sundae. Before the supports for the gig were even announced I think most people would have assumed that Triple Sundae would be playing. The two bands have been playing together in the same London DIY scene since their beginnings and have become great friends over the years. It was only right that Triple Sundae played this gig. The band themselves had already played their triumphant comeback show a month earlier at Till The Fest but this didn’t dampen anyone’s excitement to see them take to the stage. I said after the Till The Fest show that it was perhaps my favourite time ever seeing them. I take that back. This was my favourite time seeing Triple Sundae. Since coming back, there seems to be a new found enthusiasm within Hassan, Zandro, Mike and Andy and they have really smashed their sets. The smiles on each member of the band’s faces was just lovely to see and they were putting everything they had into the performance. I can’t think of many bands that get the kind of reaction from their fans as Triple Sundae do. It really is a case of everyone in the room is in it together. So many times during the set Hassan just stepped away from the microphone and let the crowd take the lead vocals. It’s something you love to see. Something I always enjoy when I see Triple Sundae play is how they make a point to shout out everyone in the room who has helped and supported them over the years. The love that comes from the crowd is always reciprocated right back by the band. It’s how it should be. Another stunning set by Triple Sundae 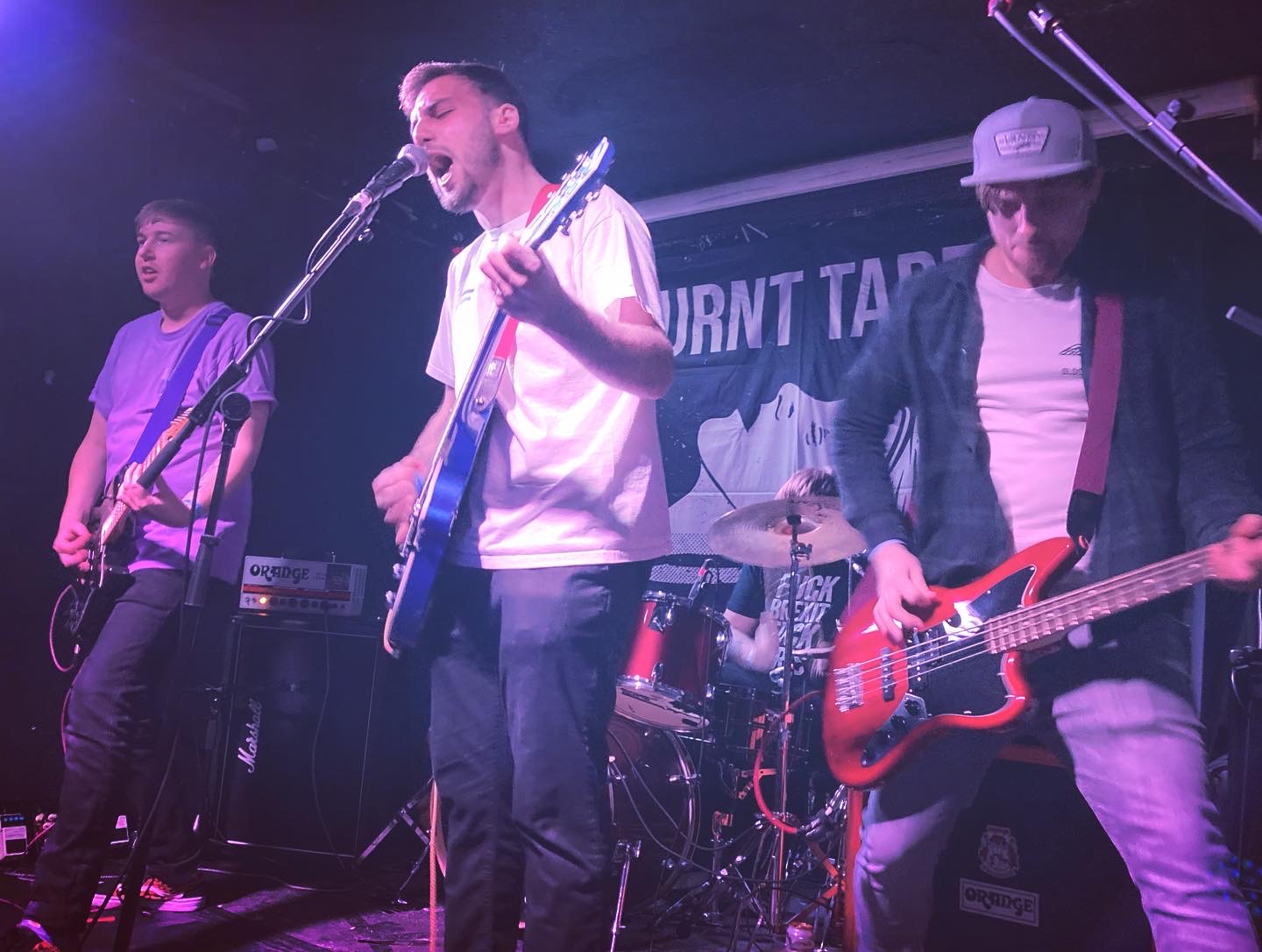 It was now time for Burnt Tapes and the room was absolutely buzzing. This was their first London headline show since their album launch show for Never Better back in 2019. After setting up their gear, they then left the stage and some traditional Greek music began to blare over the Old Blue Last speakers. It really gave the set a big-time feeling and really added to the level excitement throughout the room. The band soon returned to the stage and kicked off their set with Getitgotitgood and Drift Champ ’16. From then on, the next forty five minutes was filled with big sing-alongs, crowd surfs and stage dives – and I couldn’t have asked for anything more. The set was full of songs from Never Better and their 2020 release Grower as well as a couple of special covers. With each song the reaction seemed to get better and better. I fully expected them to finish their set with Yuzi but they decided to include it early in the set. I got extra excited when they played Dirt Roads, as I’ve been asking them to play it for months and was it great to finally see them play it again. The two pronged vocal assault from Phil and Pan throughout the set sounded as good as ever and Tone and Jordan’s rhythm section proves once again that they are one of the best in the scene. After Dirt Roads, the band slowed things down with Lost In Transit. Midway through the song Phil decided to put down his guitar and jumped into the crowd to be surfed around the room before getting put safely back down on the stage. The Burnt Tapes have played a few Menzingers cover sets in the past and treated the Old Blue Last to renditions of I Don’t Wanna Be An Asshole Anymore (where Zandro of Triple Sundae sang lead vocals) and After The Party. Both went down an absolute storm. After the covers, the band finished the set off with Things Get Weird where Tone joined the crowd on the floor to start the song and then Don’t Make Me Play Bocelli. What an epic ending to not just an incredible set but a wonderful night. 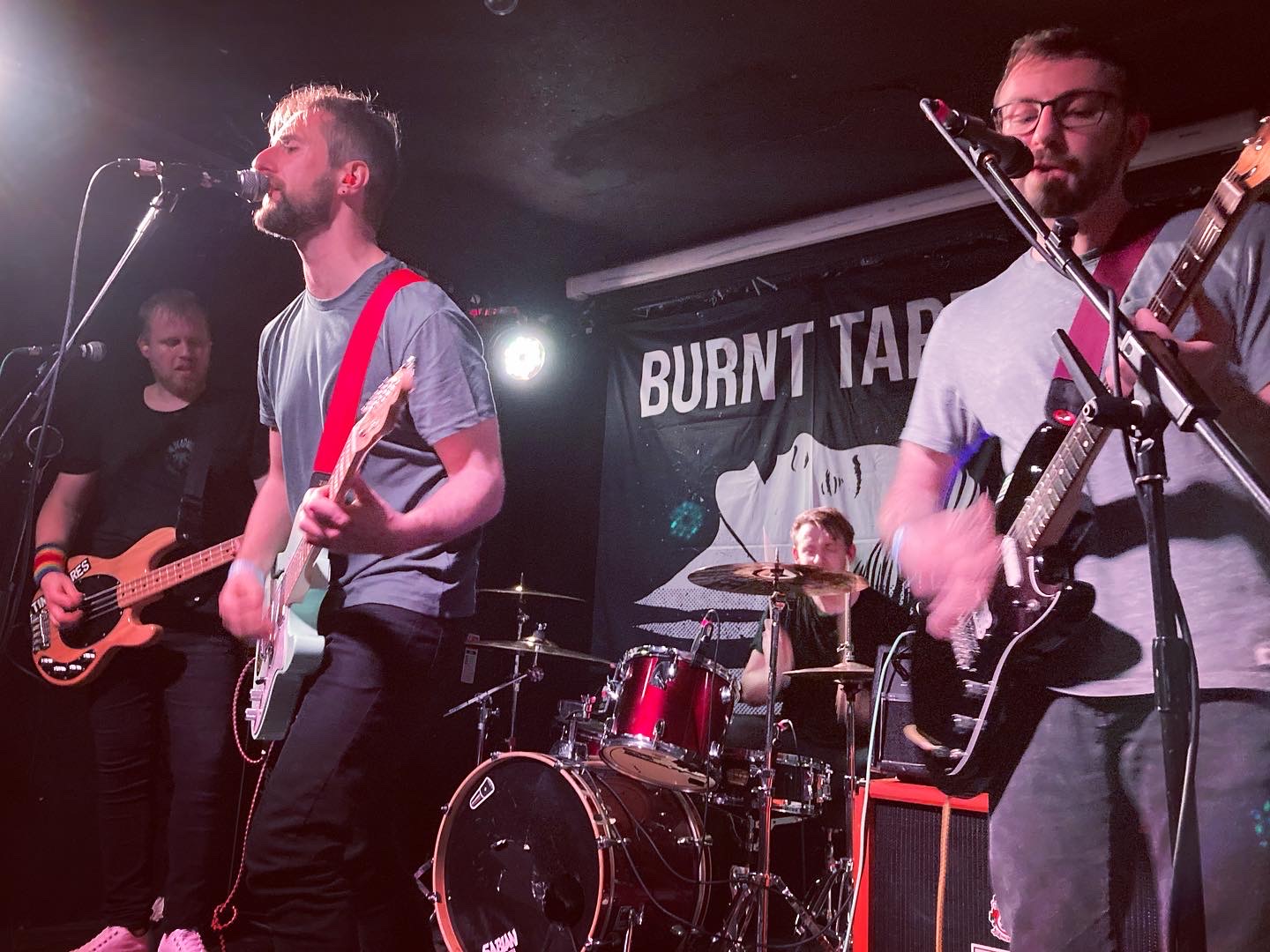 I think that when I look back at this gig in the weeks, months and years to come, it will be one of my favourites ever. With everything that’s gone on over the past eighteen months this gig seemed to mean so much to so many people. The level of love in the room was something truly special to be a part of. As we left the venue (and walked awkwardly through the weird hip hop clone swaying dance party that was happening downstairs) we were on a massive high, absolutely buzzing with a night of brilliant moments replaying in our minds. I couldn’t help but think about how much the Tapes, as well as Triple Sundae, would’ve smashed The Fest if things had worked out better. These two bands, as well as Katie MF, deserve all the success in the world, not just because of their brilliant music but because they are amazing people.
This review was written by Colin Clark. Photos by Emma Prew.
Posted by ColinsPRW at 12:26:00