This weekend, by some minor miracle, Slam Dunk Festival is happening. Obviously, the worldwide pandemic we’ve all been suffering through since March 2020 has made organising a festival a very tricky proposition. Due to the all the restrictions that have been put in place by the government, the festival has been moved around countless times and the line up has gone through a number of different variations. At the time of writing this, hopefully the line up will remain as it is until the event but who knows what will happen given the current climate of the world!

I should start by saying that the majority of bands I talk about throughout this article will be featured on the Punk In Drublic stage. That was the stage I spent most of my time at at Slam Dunk 2019 and it will be the place to find me in 2021. I’ll be the devilishly handsome one in the shorts and the black band t-shirt. The stage will once again be headlined by NOFX. Since NOFX last came to the UK they have released a split with Frank Turner (who will also be appearing) as well as their fourteenth album Single Album. It’s NOFX so who knows if they’ll play anything from those releases but you can guarantee that it’ll be one of the most talked about sets of the weekend. 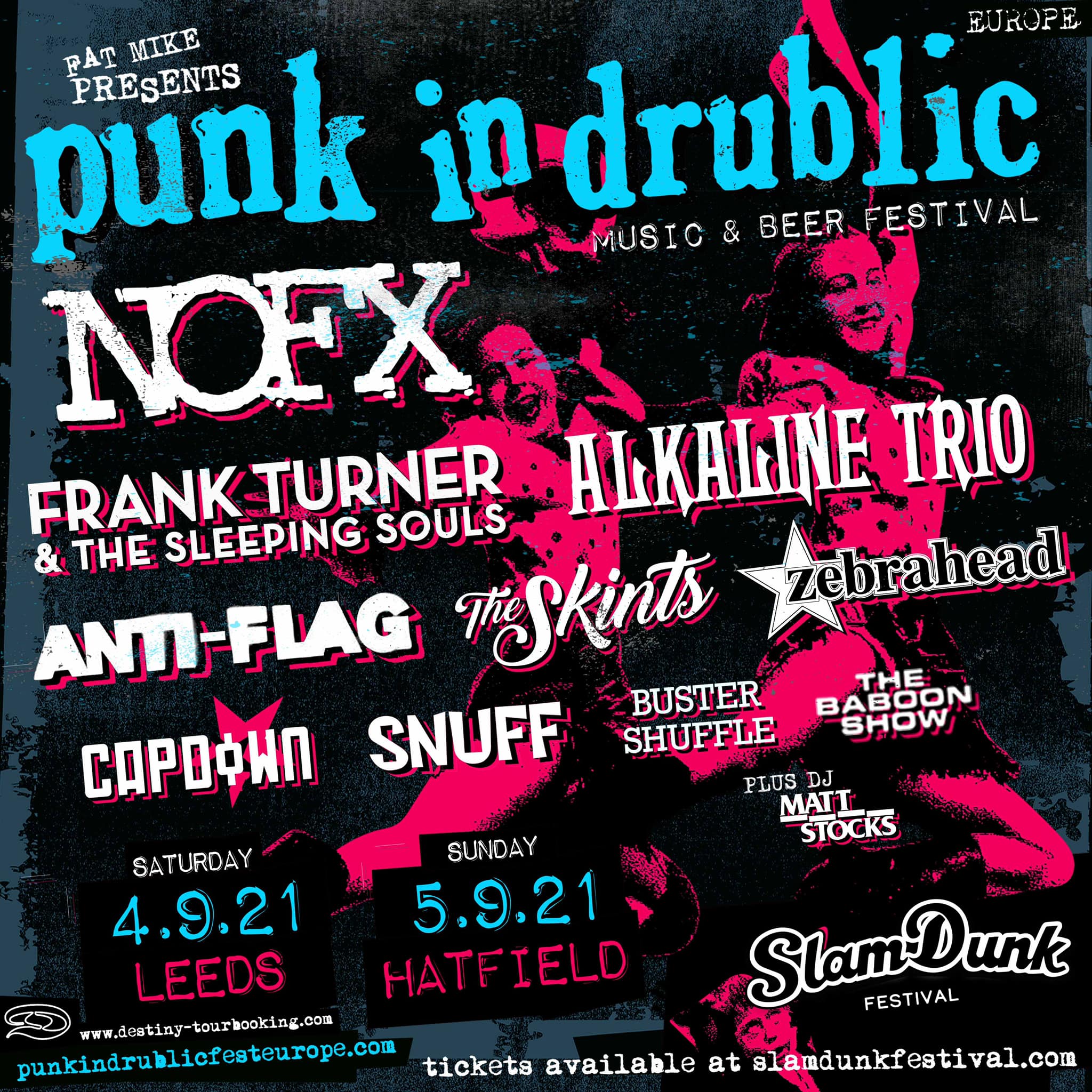 Joining them on the Punk In Drublic stage are Chicago’s Alkaline Trio. Trio have not been to the UK since touring with NOFX way back in 2015 (I assume partly due to Matt Skiba’s work with Blink-182) so their announcement was met with much excitement from fans of the band. This year the band celebrated the twentieth anniversary of their breakthrough album From Here To Infirmary so I’m expecting the set to be heavy on songs from that album alongside plenty of favourites spanning their entire career.

Stepping away from the Punk In Drublic stage for a minute we have Creeper. The Southampton based five piece continue to get bigger and bigger and have become one of the most exciting bands in the UK alternative scene. Channelling influences such as AFI and Alkaline Trio whilst showcasing their own unique style, Creeper have to be one of the most anticipated sets of the festival. The band recently released eight track American Noir which performed incredibly well in the UK popular music charts, this will be the first time the majority of the crowd will have had the opportunity to see these songs performed live.

Returning to Punk In Drublic for a comeback I never expected to see happen is Capdown. The UK skacore legends have been inactive for years now so when they were announced for Slam Dunk it was quite the surprise. It feels fitting for Capdown to be making their return now given the boom that ska punk is having and it’s entirely appropriate that one of the most influential bands in the UK scene graces the big stage once again. Recently we covered the classic album Civil Disobedients on the CPRW Podcast and I cannot wait to see some tracks from it live once again.

Talking about legendary UK ska punk bands, Slam Dunk gives us a chance to see [Spunge] a few weeks before they begin a UK tour to celebrate twenty one years of their album Room For Abuse. I’ve made it clear a number of times just how influential [Spunge] were on me, they were my gateway band into ska and punk music and without them I wouldn’t be the person that I am today. Any chance I get to see them I try and take. This will be a set full of smiley, bouncy faces.

The Popes Of Chillitown, one of the bands leading the newest group of UK ska bands, will be making their Slam Dunk debut on The Key Club stage. Based in London, the Popes have been wowing crowds all across the UK for years now with their intense and energetic style of ska punk. Word is the band have been working hard on some new material and I’m very excited to hear that. Popes Of Chillitown will be one of the first bands on at both festival sites and are guaranteed to get the party started early.

Pittsburgh punks Anti-Flag are a late addition to the line up, replacing Pennywise who sadly cannot make it over anymore. Anti-Flag are one of the best live bands on the planet, always managing to whip a crowd into a frenzy with their politically charged anthems. I would expect a greatest hits set of songs spanning their entire career. Bass player Chris#2 is one of the most engaging performers in punk rock – he’s part bass player, part singer, part acrobat and part rabble rouser and is an absolute delight to watch.

Last but certainly not least in this preview is Snuff, another legendary UK band joining the line up. Before the pandemic started, it seemed as if Snuff had been more active than they had been in years and it’s pleasing to see an eighteen month break hasn’t slowed their momentum. Combining cockney charm with ferocious punk rock, there’s not another band in the world who do it like Snuff. I would imagine there will be a lot of younger folk at Slam Dunk who aren’t familiar with Snuff but I urge those folk to give Snuff a go because of their influence to so many of the current crop of UK punk rock bands. Dan from Spoilers also plays for Snuff now and it’ll be really cool to see him on a big stage.

Big props to all the organisers of Slam Dunk Festival for struggling through this last year and managing to still put on a very impressive line up. The last year and a half has been incredibly difficult for everyone professionally and privately. Let’s hope that the festival goes on without a hitch and we can have some semblance of what life was like before.
This Slam Dunk Festival 2021 Preview was written by Colin Clark.
Posted by ColinsPRW at 12:07:00