Album Review: Dancing With The Curse by Get Dead (by Rich Bailey)

Now signed to Fat Mike’s Fat Wreck Chords, this is San Francisco Get Dead’s fifth long player. Overall, the vocal arrangement is reminiscent of Matt Caughthran of The Bronx/The Drips with some early Tim Armstrong thrown in too [no bad thing in this reviewer’s humble opinion] – think Suicide Machines mix of hardcore/ska vocals, but by one vocalist rather than two. There is a definite ska/punk vibe through a good percentage of the tracks whilst some others have story arcs that evoke Drive By Truckers. 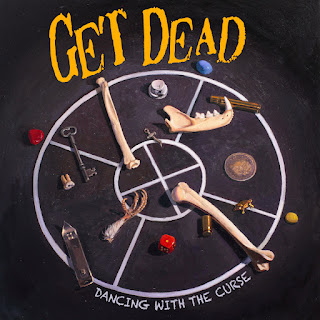 Stand out tracks include album opener Disruption; a slow burner that increases in pace from an acoustic sounding start to sudden energy, back to spoken word through to a ska-punk guitar/bass/vocal sound reminiscent of early Mad Caddies.

Second track Nickel Plated is more of a straight forward punk song that wouldn’t sound out of place on ‘… And Out Come The Wolves’; there’s a very slight Joe Strummer feeling about the lyrical arrangement, especially in the delivery of lines like “She fell in love with a criminal, I keep a bag under the bed, For the day I steal her away”. The track ends with a sample from the movie Sling Blade - “We don't got no goddamn band!; we don't need to fucking practice, Randy!”. Which I’ve heard sampled before, but can’t quite remember where.

Fire Sale is a joyful sounding rant about getting old and reminiscing about past endeavours; thieving, drinking, fighting: “These battle wounds on display, these scars we earn”.

Stick Up is the longest track on the album – and at 3:43, that’s impressive. Although it’s really difficult to decide, it is my favourite song. A warning of what life is really like behind the vacuous façade perpetrated by pretty much one and all. A great mix of hardcore vocals and then toned down to deliver killer lines like “This place is collapsing, hordes of uncontrollable bastards, they are coming for you, I see them moving, they’re fucking breathing, it feels like this place is cursed, so do your worst”; reminds me slightly of Rated ‘R’ era Queens of the Stone Age or The Bronx’s second studio album from 2006.

At the risk of assessing each and every track, I’ll mention just a few more: Glitch is the shortest song on the LP and is a tuneful, growly lament about friendships split apart by geography; 8 Track is full on upbeat ska; Green’s Girl and Confidence Game are both all-out punk rock songs with vocals that go to and fro between band members; Pepperspray, an acoustic track, is a bit like a US version of Frank Turner and probably my second fave song; Hard Times and album closer Take It are both great examples of the ska-punk genre with croaky/gravelly vox.

Damn, I namechecked and assessed every track. This really is a great album; if you’re into Rancid, The Bronx, Suicide Machines (and to be honest, even if you’re not), this really is a great album, and at $10 for the download – about £7 – it’s worth every penny (sorry, cent).
Stream and download Dancing With The Curse on Bandcamp here.
Like Get Dead on Facebook here.
This review was written by Rich Bailey.
Posted by ColinsPRW at 12:25:00