Self described as ‘Incredibly loud and incredibly gross’, London’s Fightmilk released their sophomore album, Contender (Reckless Yes Records, 2021) in May. Their first effort, Not With That Attitude (Reckless Yes Records, 2018) was an album I only heard in 2020 but was blown away by so I had fairly high hopes for Contender. I would describe Fightmilk as indie-punk, but there’s elements of power pop and a certain dream-like quality to a lot of the slower songs. Fightmilk have been together since 2015, and whilst Fightmilk may not be widely known, the songwriting, composition and production of Contender absolutely sounds like a band that are confident playing and writing together. 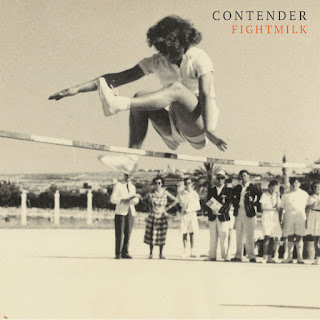 The record begins with (contender) and what sounds like a 40 second semi-outtake from the studio – ‘I’ve fucked it’ notes vocalist Lily Rae, on top of soft, almost discordant piano lines. This sets the tone wonderfully, allowing for a classic ‘1, 2, 3, 4’ count in to drop us into track two, Lucky Coin, where the rest of band join us. The tone is peppy, optimistic and bright, and you’d struggle not to get sucked in. ‘And I’m a Lucky Coin/I just flip myself back over’ is an instant vocal hook and one I look forward to hearing live. This is arguably my favourite track and one I’d recommend checking out. The tone continues straight through with Hey Annabelle and I’m Starting To Think You Don’t Even Want To Go To Space which feel particularly reminiscent of their first record, with loud guitars, tight, snappy drums and twinkly synth moments. There is some layering of synths and extra instruments, but it never feels over-produced and is one of the things I particularly enjoyed about the whole record. The band still manage to sound like 4 people in a room enjoying themselves.

The Absolute State Of Me is where we take a slight turn to something a bit more moody. There’s some fantastic guitar work which sounds like it was lifted straight from a 90s rock band and it gives this song a more mellow tone. This song is littered with dynamic changes; instruments dropping out, backing vocals coming in and a brilliant piano accompaniment towards the end. These little things could easily go amiss, which makes them even better.

Remember the dream-like qualities mentioned previously? Girls Don’t Want To Have Fun (undeniable Cyndi Lauper reference!) is the first time we hear it in all it’s chill glory. Opening with a light guitar riff and an almost Lauper-esque programmed drum beat, you instantly feel another shift in tone to something much more melancholic. The drums remain quite busy throughout, but the soft, drawn out vocals really slow the song down allowing you to hear each word clearly. There’s also some wonderful harmonies across a lot of the vocals which are very pleasant. After two minutes and no chorus, it would be easy to wonder where the song is going, but when it hits and that hi-hat comes in, you’ll question how it could ever go anywhere else. The song ends with a beautifully bittersweet moment, leaving you wanting that chorus just one more time.

Whilst Girls Don’t Want To Have Fun is a great song, it carries a heaviness, so the placement of the instantly enjoyable Cool Cool Girl is perfect. Whilst you’re still clinging to the mood of the previous song, you can’t help but get carried along with the upbeat drums and melodic guitar riff. The vocal performance on this song is possibly one of the finest moments on the record. Urgent and engaging whilst remaining honest. At two minutes, the song drops down to a harmonised vocal line and picky guitars, only to build right back up with a powerful, defiant vocal delivery. ‘I’m interesting and I’m clever/And I’ll always be a Contender’ – in a world which can be so disrespectful and disregarding of women and girls, it is paramount voices like Lily Rae’s are heard.

The aptly named (tender) is a short interlude for you to take a moment after the powerful end of the previous track. Banger 4 is just what it says it is on the tin, a guitar driven power-pop banger with some cheeky bass fills and frantic drum work and another stellar vocal performance. If You Had A Sister follows, bringing with it what feels like the defining moment of the record. It’s quite a stripped back song through the first chorus, but moving towards the second chorus, the intensity builds and builds, finishing with a more overblown, almost Weezer-sounding middle eight. And whilst this is a sad song, the accompanying instrumentation has so much variety which keeps it lighter than the previous mellow outings.

You Are Not The Universe and Maybe feel like you are on the home stretch in the best way possible. The former opening with upbeat guitars and pounding drums, driving us all the way into the sad-tinged chorus – ‘The Play Is Unread/This Script Is Unrehearsed/You’ve Made Your Bed/You Are Not The Universe’. The song ends with the record’s heaviest moment, a full distorted rock-out and could easily have been the end of the record. Maybe opens with a short acoustic intro which drops into the full band, I do feel this could have worked as a completely acoustic song.

(bartender) is a short synth lead interlude, once again bringing in the Contender/Tender/Bartender reference with some odd voice samples which sound like an old radio. And in what is the strangest placement of a song, Contender finishes with the the latest single Overbite. Placing your new single at the end of the album seems like an odd choice, but in some way it seems to sum up Fightmilk completely. The song itself is a catchy, upbeat love song which I think everyone can sympathise with.

Throughout the record it is abundantly clear the lyrics and performances are completely genuine, to the point that some of the lyrics are even a little strange (I’m into Wrestling/And I’m clever) and by no means is that a negative. You have to appreciate someone being their completely honest, weird self – I know I do anyway.
Stream and download Contender on Bandcamp here.
Like Fightmilk on Facebook here.
This review was written by John O'Hare.
Posted by ColinsPRW at 12:21:00