Album Review: Our Hell Is Right Here by Drones (by Robyn Pierce)

Drones is one of the many awesome bands I’ve discovered through Manchester Punk Festival, and I was an early fan of theirs in 2018 when their first album Exiled came out. Their debut release already showed an intense, high-energy band, with amazing musicianship and a sharp socio-political focus, and it was easily one of my favourite albums of that year. So, I was really happy when they announced that they’d be releasing their next album on Lockjaw Records in February, and the album title of Our Hell Is Right Here seemed to suggest that Drones may once again be calling out social injustice and exploring difficult issues. The band has been through some tough times and had to overcome the additional challenge of recording during a pandemic, which perhaps makes this album a little more special. After getting into it, it’s clear the second album still has all of the lashing energy of the first but also includes more personal topics and a gritty but hopeful energy. 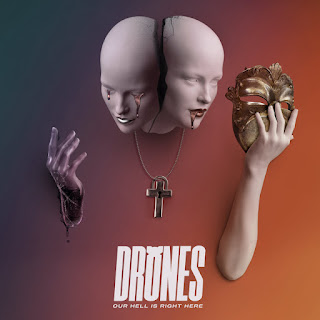 The album bursts open with ‘Please Vacate the Planet’, hitting you right away with pounding drums and ripping guitars. These are soon joined by Lois McDougall’s powerful vocals, which all work together to give Drones the big and layered sound I’ve come to love. It’s a lot like Rise Against, particularly their older faster-tempo songs, although Lois’s unique voice really sets them apart. The first track is quickly followed by the aggressive self-love of ‘Live and Let Live’ and the title track ‘Our Hell Is Right Here’, both backed by big hooks and a driving beat. In the first, Lois sings about having the courage to be yourself and not striving for external validation, while the latter delves more heavily into shared pain and betrayal. ‘Manipulate’ completes this high-tempo start to the album, including some gorgeous background “woahs”, before slowing things down with a call to ‘Listen’. ‘Listen’ is a short acoustic song with some beautiful synth embellishments, reassuring those who may be struggling with mental illness or who “feel like dying” that they’re not alone and that someone is willing to listen.

‘Learn’ is the longest song on the album at just over four and a half minutes, building up some staccato guitar chords into a soaring chorus, with some added technical flourishes here and there. It’s a song that really showcases the band’s prowess as musicians and as songwriters. Next up is ‘Josephine’, which was released as a lead single together with a trippy animated music video featuring a dangerous space mission, alien strippers, and overindulgence. It’s driven by a fantastic central riff and a catchy chorus, strategically slowing down in parts just to build right back up to a glorious rip-roaring ending. Coming into the second half of the album, ‘Lost in translation’ is a blistering two-minute track about emotional vulnerability and how “you’ve got to learn how to share if you want to live”. ‘Epitaph’ is a solemn mid-pace song about the terrible things the mind whispers in our darkest moments, while ‘Colourblind’ leans a little more into hardcore and ‘Grey Matters’ delivers more fist-pumping goodness. ‘Void’ has a killer breakdown that I would just love to hear live, and the whole album wraps up with the rousing call to action of ‘Warning Signs’.

Our Hell Is Right Here is an excellent second album from Drones, with gloriously big guitar riffs, incredible vocals, and raging melodies. While the songs differ to those on their first album in turning their attention inward to more personal matters, it’s a welcome reminder that we owe just as much to ourselves as we do to others. This is an album that celebrates resilience, grit, as well as vulnerability, and delivers high-energy hooks from start to finish.
Stream and download Our Hell Is Right Here on Bandcamp here.
Like Drones on Facebook here.
This review was written by Robyn Pierce.
Posted by ColinsPRW at 12:23:00