Pinkshift are a four piece band featuring Ashrita Kumar, Paul Vallejo, Myron Houngbedji and Erich Weinroth who are from Baltimore, Maryland. They first came to my attention in 2020 thanks to a Facebook group and immediately impressed me with their take on punk rock and grunge. In April of 2021 the band released their debut EP, Saccharine, which features five heavy hitting tracks. 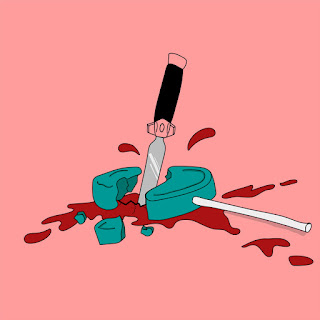 The opening track on Saccharine is titled Mars. This song is three minutes and forty-five seconds of solid melodic punk rock. The track fades in to start which allows the listener to get ready for what’s about to come. Once we get to full volume there’s already a feeling of energy surrounding the song before Ashrita Kumar’s exceptional vocals come in. They do a super job of grabbing your attention and taking you through the song, displaying some excellent range along the way. These vocals are backed exceptionally by the rest of the band, with a guitar solo really standing out. On Thin Ice begins with a simple drum beat that’s played before the vocals come in. Something I noticed on my first listen of the song was the way that it seemingly switches up melodies throughout the song. This is such an effective way of retaining the listener’s attention throughout. Despite being less than three minutes long Pinkshift manage to pack a huge amount into the song and by the time we reach the finale I was exhausted, but in the best way possible.

I’m Gonna Tell My Therapist On You was the lead single for Saccharine. Coming at you like a bullet, this is a hugely energetic and in your face track – it’s very obvious why this song was picked as a single. Pinkshift’s grunge influences shine through on the song, alongside a poppy, hook filled chorus completed with some delightful “ooooh-ooh” harmonies. The song looks at how being in a bad relationship can affect your mental health and the spiralling effect that can take place. The penultimate song is Toro. Despite only being ninety seconds long, Pinkshift pack a lot into the track. It starts out at a frantic pace that I imagine is very exciting when they play live. Ashrita sings about having someone in their head and knowing the problems it causes. As we reach the halfway point of the song, Toro changes gears and switches into a longer musical interlude which has some chilled vibes. This interlude serves as a long introduction to the final song Rainwalk. I’ve often talked about the importance of the final track on a release sounding huge and I think it’s clear listening to the track that Pinkshift agree with me. Not only is the song an EP closer, it also feels like it could be the set closer for the band. There’s so much going on I can’t mention it all but I will say it maintains the energy that the band have showcased throughout Saccharine and it really shows off just how skilled the band are. This is without a doubt a song that I wish I could be in a rowdy mosh pit for. It’s a song that deserves one.

I definitely feel like it’s only a matter of time until Pinkshift are a band on the lips of punk rockers all over the world. Based on Saccharine, it’s very clear that they have a very bright future ahead of them and could become one of the most important bands in the genre.
Stream and download Saccharine on Bandcamp here.
Like Pinkshift on Facebook here.
This review was written by Colin Clark.
Posted by ColinsPRW at 12:26:00