I think that the 538 gap between buying a ticket and attending a gig may be a new record for me. (Though I know because of rescheduling and such it will be broken). That’s how many days it was between buying a ticket and then finally being able to attend Call Me Malcolm’s launch show for their stunning album Me, Myself And Something Else at the New Cross Inn. Obviously this delay and then rescheduling was no fault of the band or promoter, Be Sharp, but due to the dumpster fire that has been the past eighteen months. But we finally got to the stage where it was able happen and excitement was in the air. 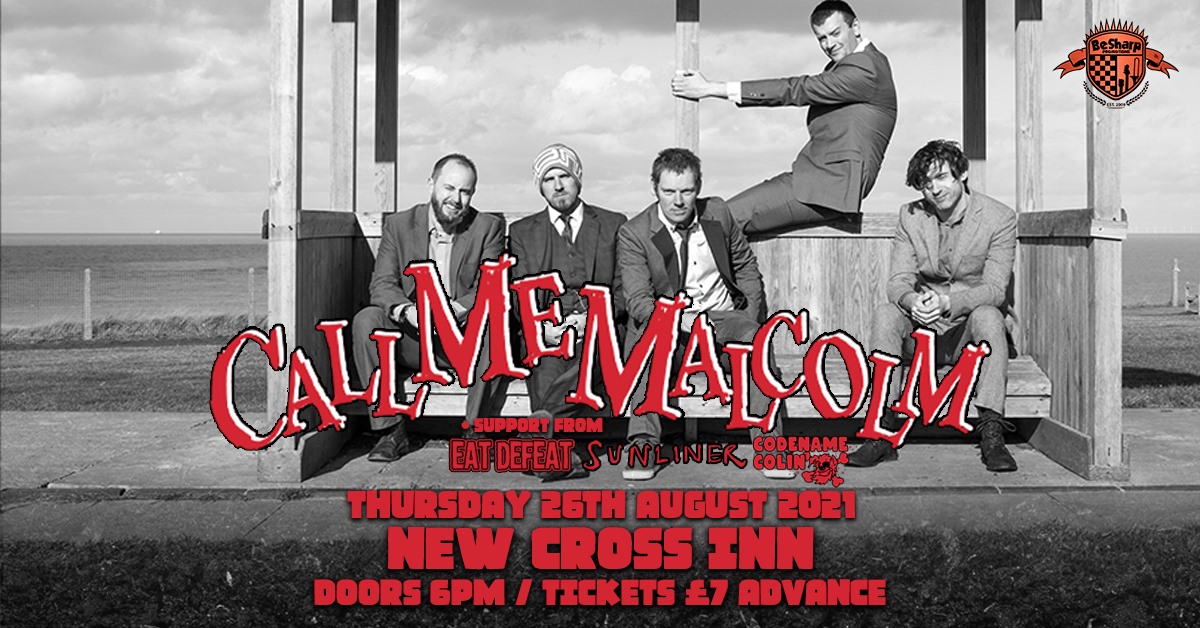 We arrived in South London with plenty of time to spare before the gig. This was spent catching up with friends we haven’t seen in far too long (including Dan, Dan#2 and Lee of the CPRW team), as well as meeting Chris from Warrington Ska Punk for the first time. What a lovely man he is.

Unfortunately due to some technical issues with the sound, Call Me Malcolm’s sound check caused the gig to start later than planned. This would become a bit of a shame later in the night but, to be honest, it was quite nice to have a bit longer to hang out with folk – something that has been missed just as much as live music has been.

Eventually it was time for Hemel Hempstead’s Codename Colin to start the show. As is tradition for the band, they began their set with a cover of Europe’s The Final Countdown. This is one of those songs that you feel like was written to be covered by a ska band. Codename Colin have often veered towards the sillier side of ska punk which made them perfect to start a gig which was essentially a massive party. Frontman Charlie, wearing a brand new suit jacket, lead the crowd in many sing-alongs ensuring the crowd was plenty warmed up for the night ahead. Highlights of the set for me included Little Things, Kelly’s Missing, Dream State and a cover of Depeche Mode’s I Just Can’t Get Enough. It’s always a pleasure to see Codename Colin play shows, I always come away with a smile on my face. 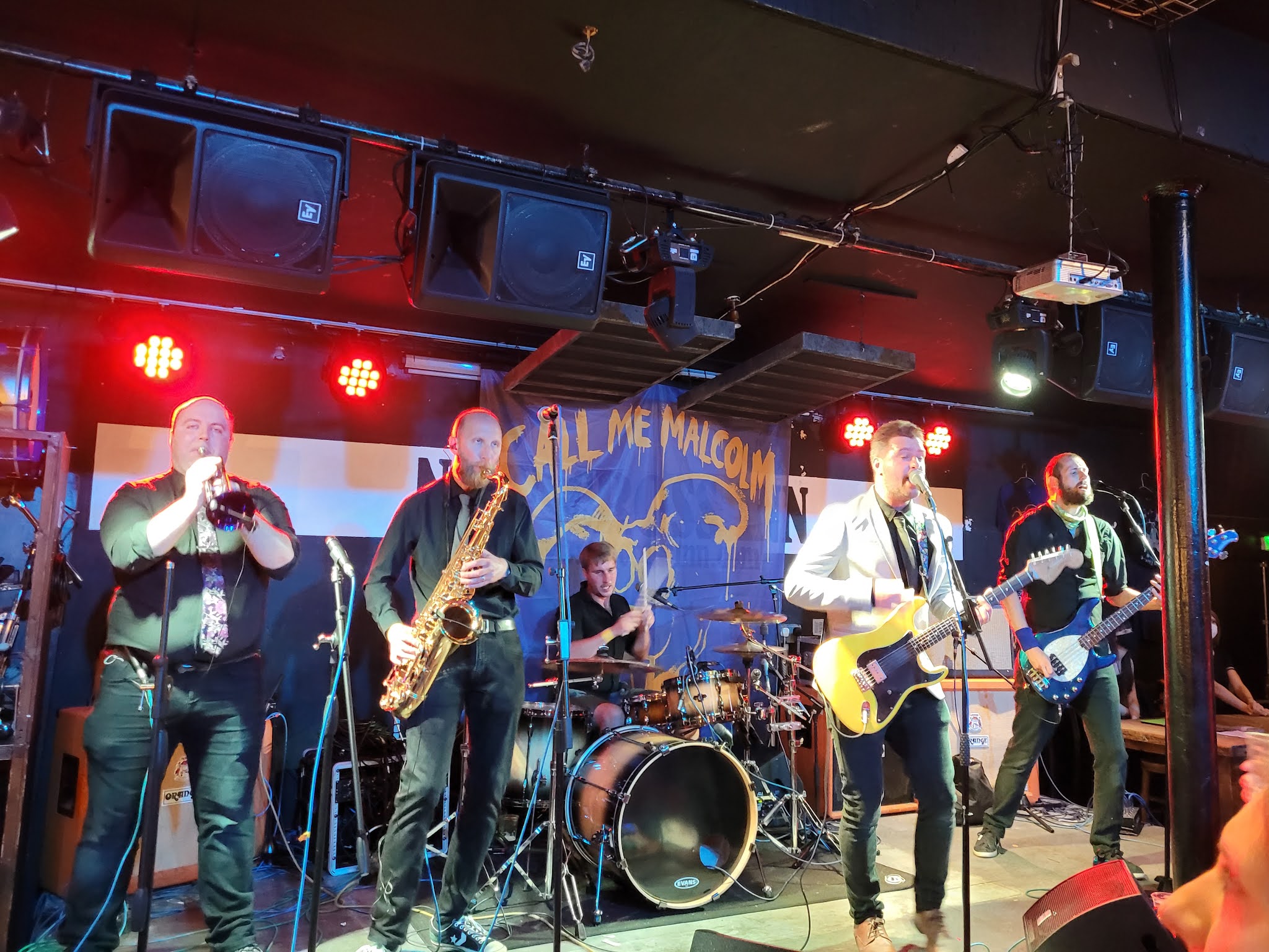 The next two bands on the line up had both made their way down from Leeds to play the show. First up were Sunliner, who you may know better as Jake And The Jellyfish. I believe that the band changed their name in early 2020 and then the world went to shit which sadly put a halt on them playing any shows and getting the band name out there. They did however manage to get some superb singles out and I was excited to see this new incarnation of the band live. Seeing these new songs live gave them a whole new lease of life, they felt so full of energy that you couldn’t help but be transfixed to the stage. Jake has one of the most unique voices in the UK punk scene and it suits this sound perfectly. I could tell that a lot of the folk who were stood around me were seriously impressed with the band and rightly so. Sunliner finished their set by going a bit old school with a great rendition of 23 which will have pleased plenty of J&TJ fans in the audience. 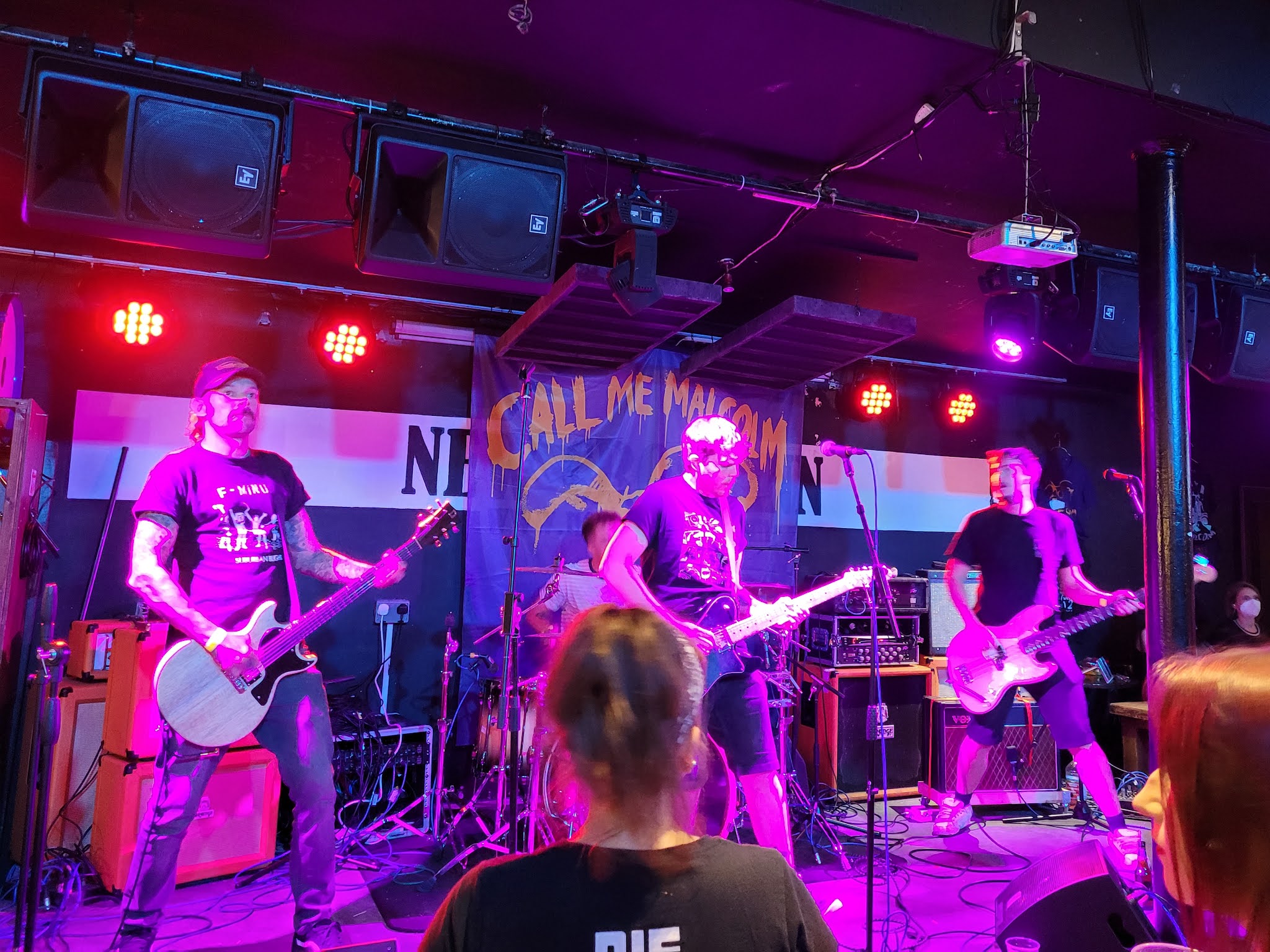 Eat Defeat are a hugely popular band at the New Cross Inn. Despite being based in Leeds, it always feels like they’re playing a home venue whenever they come down. This was their first show since January 2020, when they played Do It Together Fest at the New Cross Inn. During the pandemic, the band released a brand new EP named Go Outside which they had actually recorded in 2019. Obviously because of everything that’s happened, they never got to release the EP with any sort of fanfare so they just put it on their streaming pages for their fans to enjoy. I thought it was a pretty gutsy move to open their set with Everything Is Broken from that EP but it didn’t stop the crowd singing and dancing enthusiastically. From there they moved onto a set full of favourites from their album I Think We’ll Be OK and the EP Time & Tide. Something I always notice whenever I see Eat Defeat live is how much more aggression they play with than how they are on record. I’m a big fan of this and it’s a massive reason why I enjoy them so much whenever I get to see them. Highlights of the set for me were Smile, Self Help (For The Helplessly Selfless), The North Remembers and, of course, Not Today, Old Friend. The outro with the crowd shouting “I think we’ll be ok” back at the band had never felt more poignant and was the perfect way to end the set. 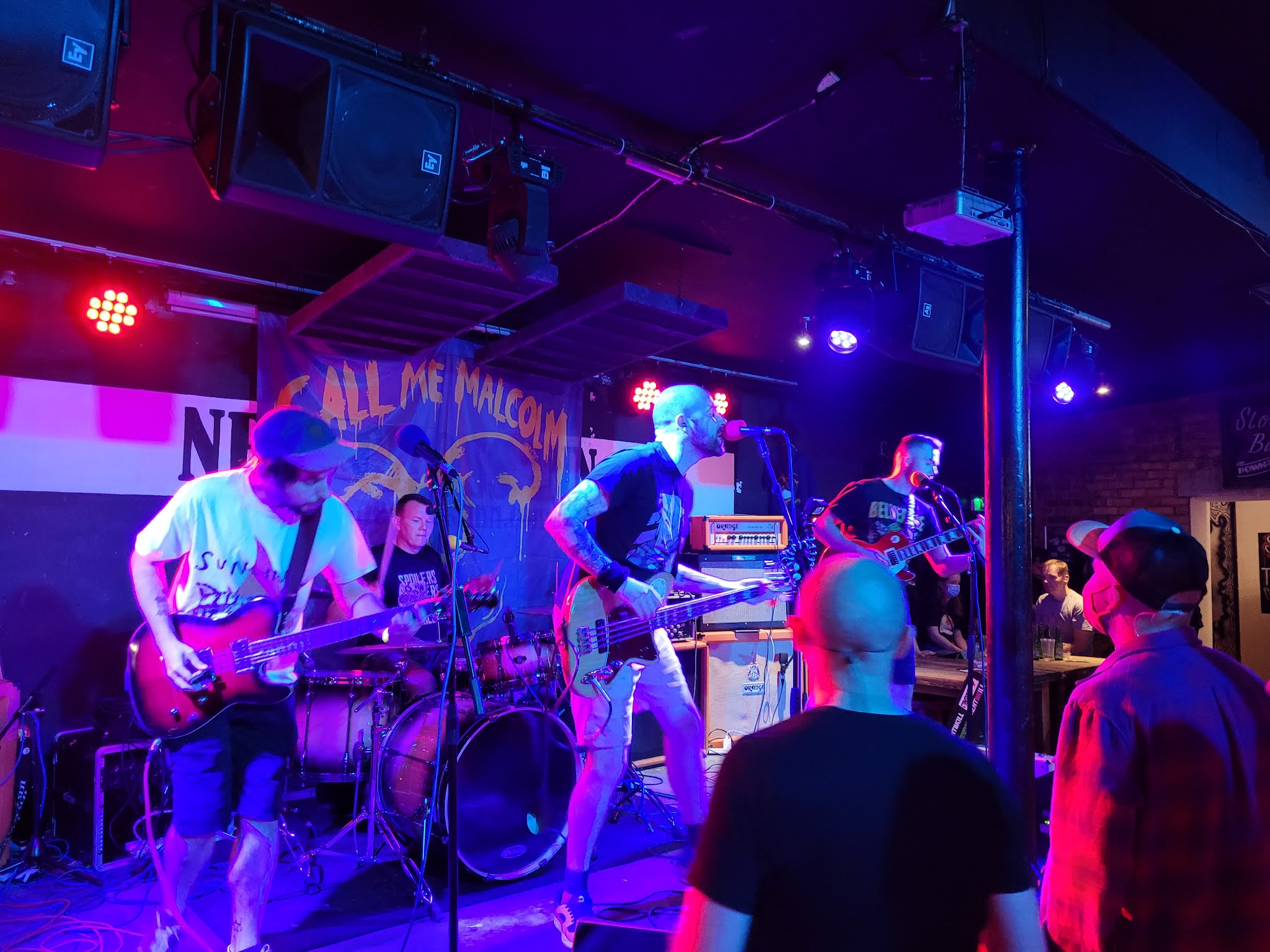 At this point, the show was running quite late and we knew that we would end up missing a chunk of Call Me Malcolm’s set. That didn’t dampen any of my excitement however. Three quarters of a Malcolm set at the New Cross Inn is better than any other band’s full set. It won’t surprise anyone reading that Me, Myself And Something Else was one of my favourite albums of 2020 so to finally have the opportunity to see these songs live was going to be a very special moment. I said in my review last year that songs showed off a heavier side of Call Me Malcolm and I was interested to see how they would fit into their set. The answer to that is fucking perfectly. I don’t know if it was because I had been listening to them for over a year but each “new” song they played felt like an old friend. They fit perfectly with the older material and really took the Malcolm live experience to a whole new level. Looking into the crowd, from the safety of the side of the stage, it was amazing to see everyone in the venue going absolutely nuts for each song. It didn’t matter if it was old or new – it was loved. We were approaching 11pm quickly, the time we knew that we would have to leave by to catch our train back to Bedford. We assumed this would mean that we would miss seeing traditional Malcolm set closer All My Nameless Friends, a song we’d been desperate to hear live for the entirety of the pandemic. For those reading who might not know, the song is partly about how people will help you through your darkest times and partly a love letter to the New Cross Inn scene. It’s a track that has really got me through the hardest times over the last eighteen months. Being not only the best band, but the best people as well, Malcolm changed their set list so that the folk who would have to leave early got to hear it. I don’t think that I’ve ever heard a crowd sing along to a song with more love and passion as I did that night. It was a really emotional moment that I won’t forget for a long, long time. Sadly after this we had to dash for our train but we already can’t wait for our next time seeing Call Me Malcolm live. That’ll be at Till The Fest, back at the New Cross Inn in October. 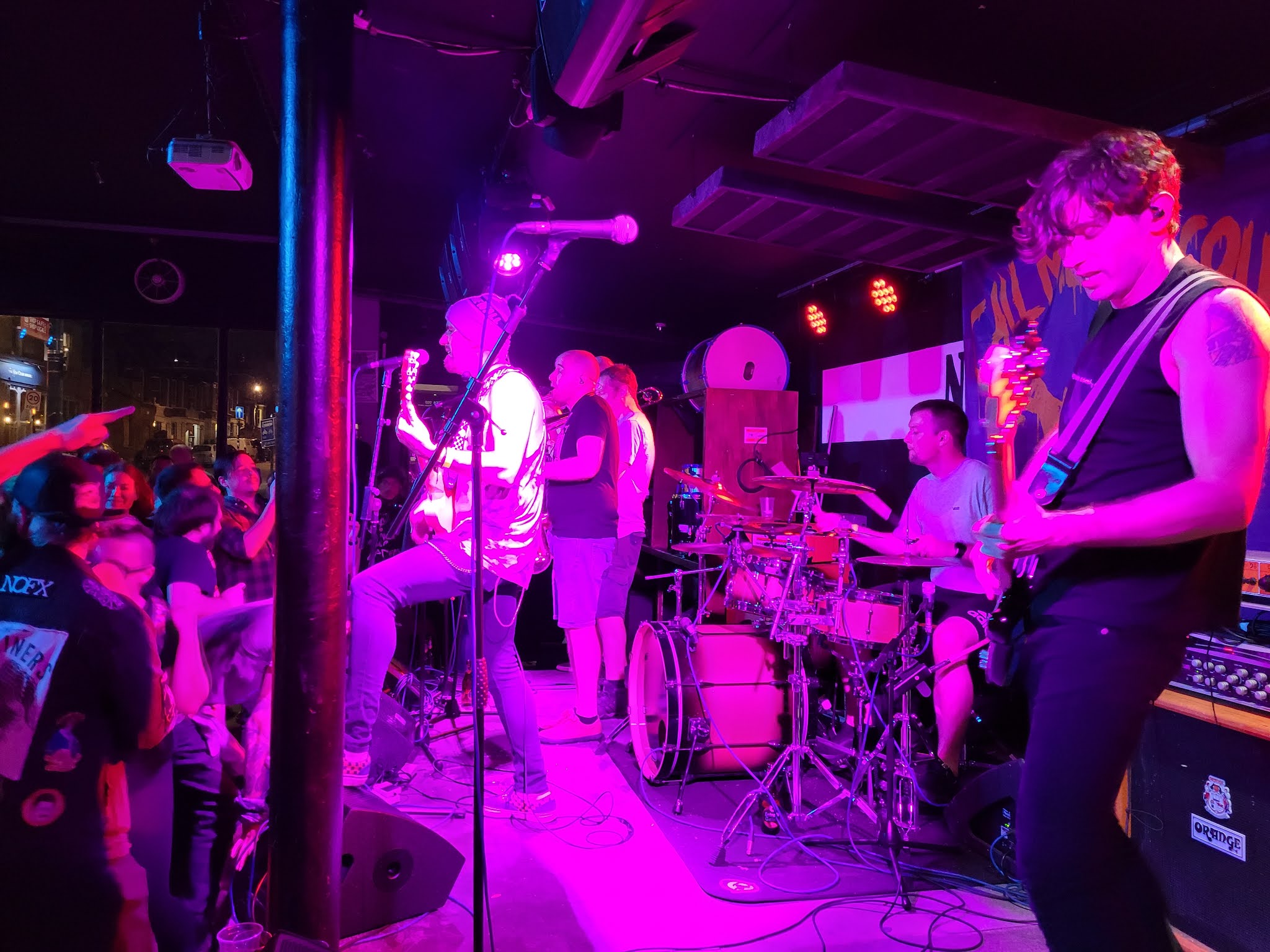 This gig review was written by Colin Clark. Photos also by Colin.
Posted by ColinsPRW at 12:21:00