Album Review: I Can't Take It Anymore by Joystick!

In a year of many disappointments, an undoubted bright spot has been the massive resurgence in the ska punk scene in the USA. You will know by now that California’s Bad Time Records (co-released with Stomp Records in Canada) have been at the forefront this surge in popularity for the genre by releasing banger after banger. Perhaps my favourite of their 2021 releases so far has been I Can’t Take It Anymore by the New Orleans based eight piece Joystick! The band have been around for over a decade now, releasing their first album back in 2010. I Can’t Take It Anymore is their fourth and it has really pushed the band into a bigger spotlight than ever before.

Before I go into my unnecessarily detailed review here is, the patron saint of the UK ska punk scene, Paul Smith’s review:

Thanks for your help, Paul. 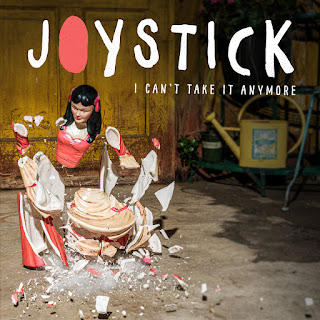 The fifteen track album begins with Retcon. This opener really sets the thematic tone for the entire album. It’s about lead singer Paul ‘Duck’ Tucker’s recovery from addiction. Retcon specifically talks about looking to the future, trying to remember that you “won’t be defined by your history.” This is a high energy beginning to the album that flits between fun ska and high octane punk rock. Following on is Detonate which is another high octane song which sees Joystick move into skacore territory. Detonate blasts (sorry) through its first half with Duck spitting out some quick fire lyrics. This song will certainly get some wild circle pits going when it’s played live. The band gives Duck a bit of a break with the addition of the horn section and a change in melody which sees them almost fall into a chant-like moment. Damage Boost sees Duck using Joystick’s platform to offer help to anyone who has been through what they’ve been through. During the track, Duck lets the listener know that they’ve been through the same things that they have and assures them they’re not alone. I really love how Joystick have used their platform here.

The fourth song, Rinse And Repeat, is one of my favourite ska punk songs of the year. It’s one that grabs your ear from the first listen with its upbeat nature and super positive chorus. On the song, Duck sings about being new and improved, and although there are hard days they know they are in a much better place. I often mention catharsis when reviewing albums and this song can easily be placed into the box of cathartic bangers. (Side note: cathartic bangers is such a great idea for a playlist). Gggghost is the first song on the album that really puts a big focus on Joystick’s brass section. Josh Bourgeois (trombone), Justin Mcdowell (tenor sax), Garrett Corripio (trumpet) and Andrew Heaton (trombone) open the song in a dramatic fashion. I really enjoy the contrasting style of the song. Duck’s vocals are raspy and intense but the horns give the track a lighter, sunnier feel. They are also used to tremendous effect in the breakdown, giving the song a huge feel. Gggghost is about shutting out the ghosts from your past and moving on with your life. Parallelograms was an immediate stand out when I first listened to I Can’t Take It Anymore. It’s an upbeat ska punk song that is packed full of undeniable energy, beginning with some more excellent horns that quickly put a smile on my face before Duck comes in with some quickly delivered vocals. The song tells a story about someone who is seemingly living a double life. One life paints a picture of a happy go lucky soul without a care in the world and the other is one of someone battling a drug addiction. The life spent battling addiction is kept secret from their other life and sadly ends fatally. The song follows that long standing ska punk tradition of sounding super happy but when you look deeper into the song it’s actually really sad. Duck’s lyrics on this track are superb.

No Sleep After Brooklyn is an instrumental track that throws us back to the early days of ska. This really allows Joystick to show off just what a talented bunch of musicians they are. They can play highly energetic ska punk songs just as well as they can play an homage to some more traditional ska. The eighth song, 7675, sees the band joined by fellow New Orleans musician Zach Quinn of Pears and Bandaid Brigade. As you might imagine in a song featuring the lead singer from Pears, the track is a fast one. What a contrast this is from the previous track, really showcasing the band’s ability to mix up styles. After the relaxing chill out vibe of the previous song we’re now back in the chaos. I don’t think the album really needed such an injection of energy at this moment but I found myself lost in it anyway. My highlight of the song is how Duck and Zach interchange vocals seemingly along with exchanging harmonies on occasion as well. Carrot And Stick begins with a really summery reggae feel to it. It’s one you can have a gentle sway to whilst crooning with Duck. We reach the halfway point of the song and the band crank things up to give the song a big finale. This song could have so easily been the album’s closer with such an epic ending but we’ve still got six songs left to go!

Unscene is a fast hardcore track that addresses that one idiot that appears in every scene. We’ve all seen the guy who is super macho and, rather than coming out to enjoy the music and the community, just looks to drink and get into fights. This person is not a part of the scene or community and just ruins things for everyone else. I love that Joystick address this on the album. This macho behaviour is one that needs to be eradicated from the punk and ska scene – the sooner, the better. Semicolon is another instrumental song. It’s a largely piano based song that really serves as an extended introduction to the next song, Past Tense. The horns at the start of the song, after that long introduction, immediately make the song feel massive and give me high expectations for what is to come. It’s a slower song than anything so far on I Can’t Take It Anymore and perhaps the most emotional as well. I think the song is about trying to fix past relationships that have been damaged by your addictions. This is a song that will garner huge sing-alongs when Joystick get to play it live. Much like Carrot And Stick, Past Tense also feels like it could be the album closer but we still have three songs to go!!

Track thirteen is titled Shots. It’s just twenty-nine seconds long and absolutely flies by in a ferocious manner. Shots is about being given more chances after you’ve messed up and being thankful for those opportunities. This is posi-hardcore at its absolute finest and is an important reminder that you shouldn’t shut people out who are going through difficult times and need your support. The penultimate song is Worm Food. Worm Food is perhaps the most unique sounding track on the album. It’s begins seriously stripped back with an acoustic guitar and some whispering getting things going. There are some teases of the full band coming in but for the most part we stay with the acoustic sound as Duck sings about thinking too much about death. This is one of the most cheerful songs about death that I’ve ever heard for sure and maybe one of the most enjoyable. The fifteenth and final song is the album’s title track, I Can’t Take It Anymore. What an amazing and positive way to finish the album. And not just to finish an album, as I suspect that this will now become the traditional set closer for the band’s live sets. This is probably the poppiest song on the album but that’s a great thing. For me the best pop music is super positive and puts a smile on my face and that’s exactly what this song does. It’s about conquering your demons and working on self improvement. This is another song that could easily find a home in the cathartic bangers playlist I decided I should make earlier. The song is written for huge sing-alongs and I personally can imagine this being absolutely epic played in the New Cross Inn in front of a big crowd. That’s got to be a thing that happens as soon as it’s possible. This is the perfect way to end an incredible album.

I Can’t Take It Anymore is not just a brilliant album, it’s also a really brave and important album due to its themes and content. Not only will people enjoy dancing and singing along with it, I imagine that it will also offer help and support to people. Bravo Joystick!
Stream and download I Can’t Take It Anymore on Bandcamp here.
Like Joystick! on Facebook here.
This review was written by Colin Clark.
Posted by ColinsPRW at 12:02:00